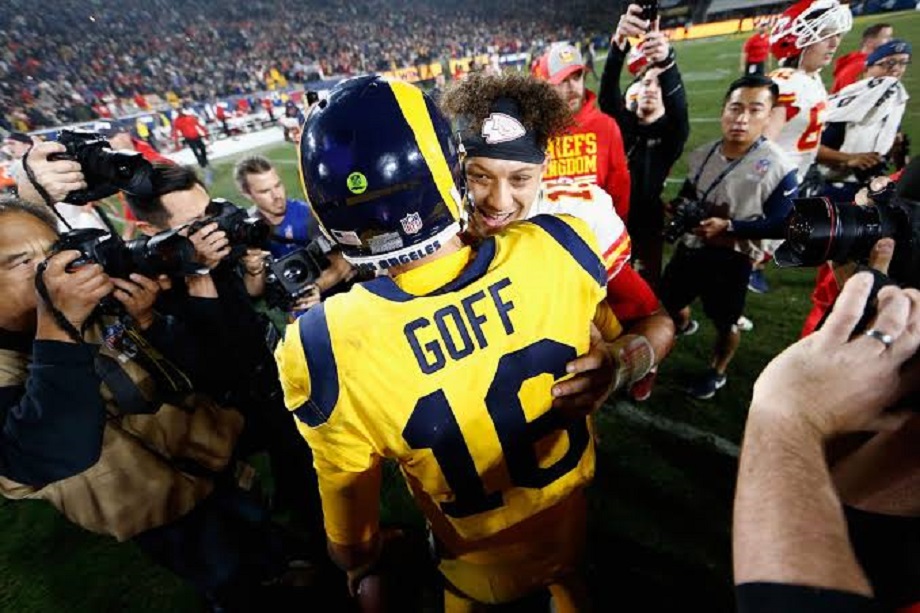 In the world of professional sports, when two dominant teams face each other at the top of their game, everyone and everything becomes ripe with anticipation. Odds are set, historical parallels are drawn, precedents are brought into the foreground and analysts analyse the hell out of all aspects of the game. Sometimes, even what the players ate for breakfast becomes a topic for hot discussion. Friends might sit and debate which player from which team has a hotter wife/girlfriend. As different as these activities are, they have one common goal – building hype. And when the hype is pushed up to Burj Khalifa heights, only two things can happen, the clash of the titans will be thunderous till the end or it will stumble across the finish line and fall flat with a thud. Needless to say that the Monday Night Football clash between the Los Angeles Rams and the Kansas City Chiefs was of the former kind.
Records were set, trails were blazed, hyperbole were showered with reckless abandon and aside from football fans who want to see defensive slugfests which end with a score of 10-7, everyone has been re-infected with football fever of the highest degree. Here are five reasons the Monday Night classic was more than just a game:

#1. It wasn’t even supposed to happen in Los Angeles

The game was supposed to be held in Mexico City, Mexico. The 87,000 seater Estadio Azteca was supposed to host the teams. However, at the last minute, the NFL pulled the game out of Mexico because the turf quality didn’t meet NFL standards. The LA Memorial Coliseum put everything together hastily. Teams went through the logistical nightmare of re-booking flights and hotels and somehow presented us with a spectacular game on a cool monday night in the City of Angels without a single empty seat in the arena. In the words of Fox Sports’ Colin Cowherd, ‘it was like hosting a successful thanksgiving party in your house after the original host had to cancel plans because his dishwasher broke down’.

The sheer volume and pace of points scored and yards gained wasn’t just because of the greatness of the players. It was also helped by NFL’s conscious efforts to enforce roughing the passer penalties and eliminate helmet to helmet hits. This is what NFL Commissioner Roger Goodell said in March: “Our focus is taking the head out of the game, to make sure we’re using the helmet as protection and not as a weapon.”
The consequences of the rule changes were fully on display during the game. The game witnessed an offensive explosion which rewarded fast, aerial, pass-heavy offence and drove a stake through the heart of robust defence.

Let’s face it, there’s no one like the Rams’ defensive tackle, #99 Aaron Donald. There’s just nothing you can do to stop him. Double coverage, doesn’t matter. Aaron Donald WILL get to your quarterback. He recorded 2.0 sacks for the game and pressured Chiefs quarterback Patrick Mahomes throughout. On the other side, the Chiefs’ wide receiver, #10 Tyreek Hill proved that he might just be a mutant or a meta human with his incredible speed. This football player with track speed burned the Rams’ secondary and blazed for 215 yards with 10 catches and 2 touchdowns.

#4. It could’ve been a Super Bowl trailer

#5. It could’ve been a sign of things to come

Both the Rams and the Chiefs are loaded with supremely talented young players who can be expected to be brilliant over the coming years. If these teams are not bitten by the injury bug, they might end up forming a cross conference rivalry for the ages.

How you can increase traffic by Podcast?