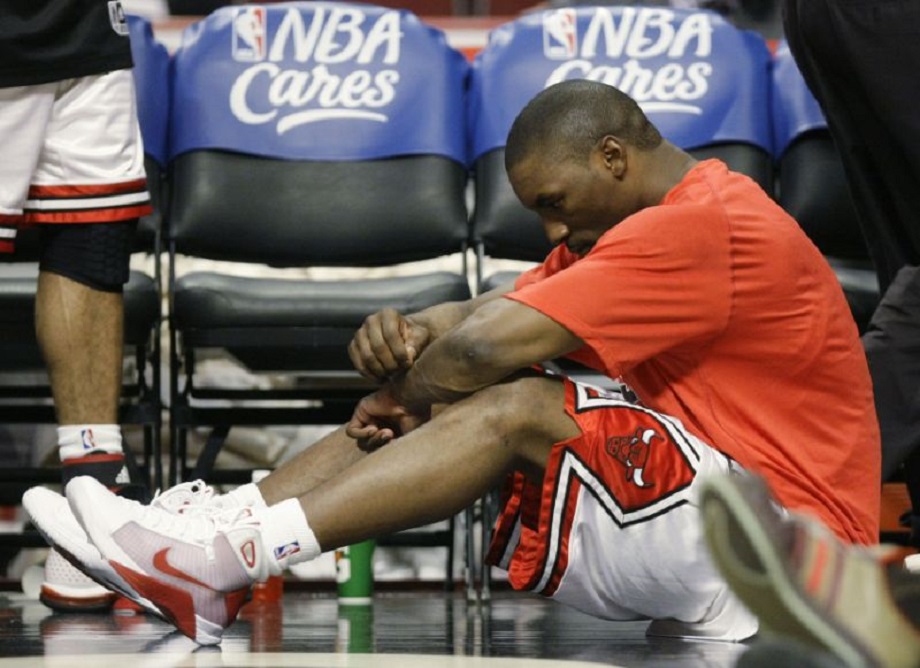 The NBA is an exclusive club of the best basketball players in the world. At any given point of time, the best (and physically capable) 450 basketball players of the world play in it. The number of NBA stars is even lesser and it forms one of the most exclusive groups of highly skilled athletes in the world. Whenever a player has a breakout year and emerges as a true star of the game, fans and experts alike expect the player to sustain that level of greatness and only lose his abilities with age and attrition. Most stars find a way to deliver on those expectations but there is a select group of former NBA stars who almost  inexplicably and abruptly lost their abilities to play the game at the highest possible level. Today, we will look at a two stars who burst on to the scene with a big bang, but were soon reduced to the faint glow of a white dwarf.

At a very young age of 25, Indiana Pacers star Danny Granger put up a monster season. In 2009, Granger averaged 25.8 points, 5.1 rebounds and 2.7 assists per game on his way to an All Star selection and the league’s Most Improved Player Award. Historically speaking, only 12 players in the history of the NBA have had such a season. So Granger wasn’t just good at 25, he was excellent. He was slightly ahead of his time as his knock-down three point shooting abilities weren’t really utilized by the Pacers game plan. With today’s pace and space style in the NBA and a ‘bombs away’ mentality from the three point line, Granger’s numbers would’ve been even higher.
A look at the steady career progression of Granger indicates that he should’ve become an even better player as his career grew in experience. In his first 4 seasons as an NBA Pro, Granger drastically improved each year. Going from averaging 7.5 points per game in his rookie year to 13.9 in year 2 to 19.6 in year 3 and finally 25.8 in year 4 at a young age of 25. These numbers resembled that of a player about to hit his prime in the NBA and become one of the best scorers of the game. However, just 4 years later he played just 5 games and averaged 5.4 points per game. He never averaged over 9 points per game again and just two years later, retired at a young age of 31.

As far as it comes to an abrupt and drastic falls in a star’s basketball abilities, the case of Ben Gordon is a strong contender for the absolute worst. In his time with the Chicago Bulls, Gordon established himself as one of the premier perimeter players of the league and when he was on a hot streak, he was absolutely unguardable. In his last year with the Bulls, Gordon averaged 20.7 points per game and had a really memorable first round series with the Boston Celtics. He proved himself to be a true ‘go to’ scorer for the Bulls in the series. He dropped 42 points in game 2 and repeatedly came up big in crunch moments for the Bulls. His heroism wasn’t enough as the up and coming Bulls lost in seven games to the experienced Celtics. Gordon’s future seemed very bright and no one believed in that as much as the Detroit Pistons front office.
The Pistons signed Gordon to a 5 year, $58 million contract which was massive for that time. Unfortunately for the Pistons, what ended up happening was that Gordon just seemed to have acted like a player who  keen on getting paid as he played lights out in his contract year with the Bulls. However, once he got paid, he kind of stopped caring about basketball. When asked about the steep decline in his numbers, Gordon said that he was confused with the Pistons’ style of play and the inconsistent minutes that he was receiving. However, the numbers clearly demonstrated that there was something more in play as his scoring average plummeted from 20.7 points per game to 13.9 points per game on a 27 win Pistons team at just 26 years old. To make matters worse, those 13.9 points per game were the highest he would ever average again in his career. And by the age of 31, he was out of the NBA completely. Ever since he has been out of the NBA, he has struggled off the court as well and he was arrested in Los Angeles for pulling a firearm at his apartment. 4 months later, he was placed in a psychiatric hospital.

Gujarat Women upset M.P after a nail biting finish on Day 4 of the 69th Junior National Basketball Championship for Men and Women in Ludhiana