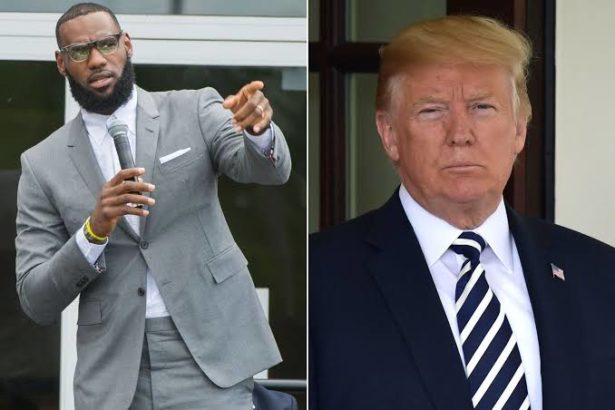 CNN‘s Don Lemon recently sat down with Los Angeles Lakers superstar LeBron James for an interview. During the interview, LeBron James said that sports has never been something that divides people. It has always done the job of bringing people with varying backgrounds together. James went on to add that he felt that the President of the United States, Donald Trump was using sports to ‘kind of divide people’.
LeBron James’ sentiments were probably fuelled by the recent interactions between American Pro Sports Teams & Players, and the President, Donald Trump. The President had famously called National Football League (NFL) players ‘sons of b****es’ and asked the team owners to fire the players because they were protesting during the pre-game national anthem. Led by Colin Kaepernick, ex quarterback of the San Francisco 49ers, some NFL players were protesting against the social injustice and discrimination faced by the African-American community, especially at the hands of law enforcement officials. Kaepernick started his protest by sitting during the anthem, but after speaking to a war veteran, changed it to kneeling while the other players stood. It’s possible that his activism might have cost him his spot on the 49ers roster, however, that’s just a possibility, not a certainty. Most players on the Super Bowl LII champions, Philadelphia Eagles squad decided to not attend the annual Champions’ White House visit over the national anthem issue as well. Trump responded to that by cancelling the event altogether.
In the NBA, Golden State Warriors’ superstar Stephen Curry also openly proclaimed that he is not interested in attending the White House visit as a part of the Warriors championship squad. Donald Trump responded publically to that with a tweet which said that Stephen Curry is not invited to the White House anyway. NBA coaches such as the San Antonio Spurs’ Gregg Popovich and the Golden State Warriors’ Steve Kerr have also been openly critical of the Trump administration. It’s safe to conclude that there is no love lost between Donald Trump and the NBA players & coaches. And this strife keeps overflowing for public consumption from time to time. Trump’s response to James’ interview is just one of the many spats that have happened in public.
Here’s what Donald Trump had to say about the interview: “Lebron James was just interviewed by the dumbest man on television, Don Lemon. He made Lebron look smart, which isn’t easy to do. I like Mike!”
The last part of the tweet also enunciated Trump’s point of view when it comes to the Michael Jordan vs LeBron James debate. He clearly is on the side of Michael Jordan.
However, this statement didn’t win Trump any support from Michael Jordan. The current owner of the Charlotte Hornets vouched for James instead, through a statement following Trump’s tweet: “I support LJ, he’s doing an amazing job for his community.”
Adam Silver, commissioner of the NBA also expressed his support for James from South Africa. He was there for the third NBA Africa Game. Here’s what he told USA Today: “LeBron James is one of the all-time greatest NBA players and one of the most accomplished athletes. He runs a very successful media company. He’s sent hundreds of students to college and just opened a school in Akron where at-risk students will receive free tuition, meals and transportation. I greatly admire his intelligence and business acumen and have enormous respect and appreciation for what he does in his community.”
A lot of NBA players also came to LeBron James’ defence through social media. Here’s what some of them had to say in response to Donald Trump’s tweet:
Karl Anthony Towns (Minnesota Timberwolves): “So let me get this straight: Flint, MI has dirty water still, but you worried about an interview about a man doing good for education and generations of kids in his hometown? Shut your damn mouth! Stop using them twitter fingers and get stuff done for our country with that pen (sic).”
Donovan Mitchell (Utah Jazz): “A sign of an insecure human being is one who attacks others to make themselves feel better… im just sad that young kids have to see stupid tweets like these and grow up thinking it’s okay… forget everything else Donald your setting a bad example for kids and our future (sic).”
Stephen Curry (Golden State Warriors): “Keep doing you @KingJames (sic)!”
Jared Dudley (Brooklyn Nets): “He (Trump) gotta go (sic)!”
Anthony Tolliver (Minnesota Timberwolves): “I’ve been silent about ALL of the DUMB stuff this man has tweeted but THIS is attacking the NBA brotherhood and I’m not rollin’! What an embarrassment…(sic)”
Bradley Beal (Washington Wizards): “Tired of you (sic)!”
Bill Russell (NBA Hall of Famer): “I hadn’t a need until now to say I am proud of @KingJames for following his dream to open ‘I Promise’ school. Helping kids & their families work towards a better life. All done with his own $$, for anyone to criticize that is shameful & lacks compassion (sic).”
Don Lemon, who conducted LeBron James’ interview, also weighed in with his opinion on Trumps reaction. This is what he had to say: “Who’s the real dummy? A man who puts kids in classrooms or one who puts kids in cages?”
Los Angeles Lakers owner Jeanie Buss also came out in support of her superstar player. This is what she had to say in her statement: “The franchise could not be more proud to have LeBron James as part of our Lakers family. He is an incredibly thoughtful and intelligent leader and clearly appreciates the power that sports has to unite communities and inspire the world to be a better place. Those efforts should be celebrated by all.”

FIFA Rainbow Armband Too Political, But Morocco With Palestine’s Flag Is Okay?