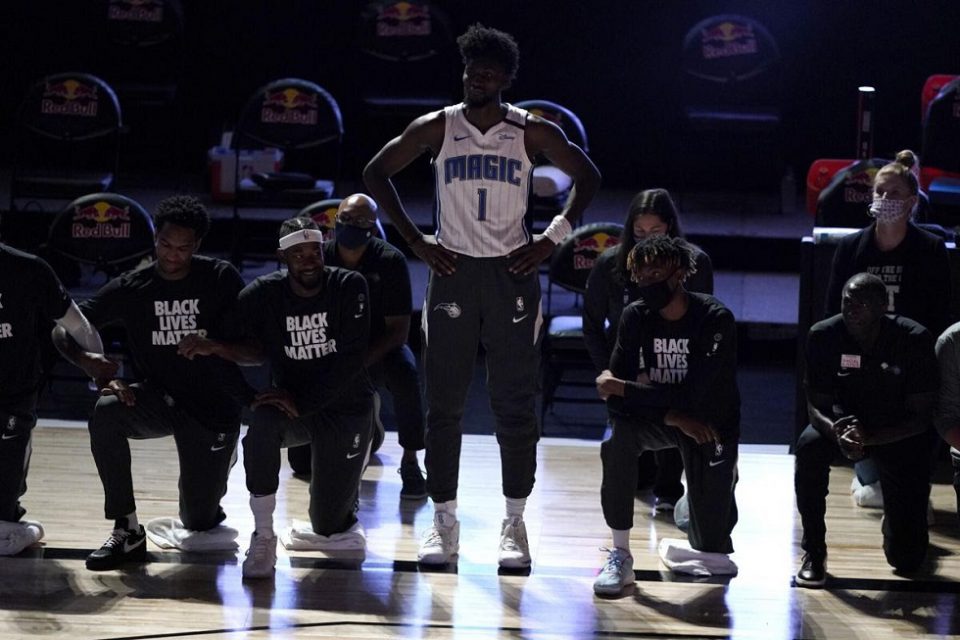 When San Francisco 49ers Quarterback Colin Kaepernick sat during the National Anthem for the first time in 2016, it became a big controversy across America. After speaking to some war veterans, Colin Kaepernick started kneeling instead of sitting during it. That eventually resulted in him losing his job in the NFL. At that point of time, he stood out because he kneeled others stood. Fast forward four years, and the political climate has changed so much that players standing for the national anthem have become a rarity. In an absurd turn of events, it’s now considered “controversial” to stand for the American National Anthem.

How did standing for the national anthem become controversial?

After the murder in custody of an unarmed black man George Floyd in Minneapolis by a policeman, America rose in protest. At the forefront of the protest, is the Black Lives Matter movement. On the surface, the name sounds righteous but there’s more to it than meets the eye. It’s an organization with trained Marxists at the helm and it wants to “dismantle the nuclear family”. The NBA has fully embraced the Black Lives Matter movement, with all the courts sporting the Black Lives Matter vinyl and almost all players have been wearing tshirts with that logo. During the season “reopener” in Orlando, all NBA players kneeled during the National Anthem. Players continued their social justice crusade with their in game jerseys as well. Some of the titles sported by NBA players included things like “Equality,” “I am a man,” “Ally,” and “Say her name.” However, on the second day, some players and coaches stood out for not kneeling during the anthem.

Who didn’t kneel for the National Anthem?

The Orlando Magic’s 22 year old forward Jonathan Isaac stood tall amidst a sea of players, referees and coaches kneeling before his team’s matchup against the Brooklyn Nets. Aside from that, Isaac also chose to not wear a Black Lives Matter jersey and wore his team’s jersey instead. Of course, given the way things are and the excessive leftist bias in American journalism, he was asked to explain why he stood for the National Anthem (what strange times we live in). Isaac said: ” I don’t think putting that shirt on and kneeling went hand-in-hand with supporting Black lives. For me Black lives are supported through the gospel. All lives are supported through the gospel. We all have things that we do wrong and sometimes it gets to a place that we’re pointing fingers at who’s wrong is worst. Or who’s wrong is seen, so I feel like the Bible tells us that we all fall short of God’s glory. That will help bring us closer together and get past skin color. And get past anything that’s on the surface and doesn’t really get into the hearts or men and women.”

Some highly virtuous journalists like Dane Moore were very puzzled by Jonathan Isaac’s decision. Here’s what she tweeted:  “I’m very curious about — and will be patient for — Jonathan Isaac’s explanation here. Standing for the anthem is one thing… But seeming to be intentional about *not* wearing a Black Lives Matter shirt…. I dunno, man…”

A lot of sensible users were rightfully unconcerned with it. One twitter user said: “Drag me I don’t care..”What Jonathan Isaac did was his right to do. I lost no respect for him and still respect him for who he is. If a player stands or kneels, I could care less.”

The DeVos family which owns the Orlando Magic released a statement supporting the players’ decision to protest before the game. Isaac’s decision wasn’t discussed in it though. Here’s the statement: “The DeVos Family and the Orlando Magic organization fully supports Magic players who have chosen to leverage their professional platform to send a peaceful and powerful message condemning bigotry, racial injustice and the unwarranted use of violence by police, especially against people of color. We are proud of the positive impact our players have made and join with them in the belief that sports can bring people together — bridging divides and promoting inclusion, equality, diversity and unity. We know this is not about the military, the men and women who serve honorably to keep our communities safe for all, or those who have paid the ultimate price to provide freedom, including freedom of expression.

We’re confident the entire Magic family has immense respect for these entities and individuals,” the statement said. “This is about coming together to end racism once and for all. We are committed to walking alongside our players — today and in the many days ahead — in the pursuit of lasting and impactful change.”

In the other NBA game of the night, San Antonio Spurs head coach Gregg Popovich and assistant coach Becky Hammon chose to stand for the National Anthem while just about everyone else kneeled.

Popovich had previously spoken extensively against the systemic racism in America and has been an outspoken critic of President Donald Trump, who he has accused of being divisive.

When asked about his decision to stand, he responded in the typical Popovich fashion: “I prefer to keep that to myself. Everybody has to make a personal decision. The league has been great about that. Everybody has the freedom to react any way that they want. For whatever reasons that I have, I reacted the way I wanted to.” Popovich graduated from the US Air Force Academy in 1970 and also serves as the Head Coach of the USA basketball team.

Beforehand, Popovich had said that each player and coach should decide what they should do during the anthem. In an NBA recorded PSA, however, Popovich stressed the importance for the country at large to continue its protests and efforts to fight racial inequality. Popovich has often defended former NFL quarterback Colin Kaepernick for kneeling during the national anthem to protest police brutality and racial inequality. Popovich has already criticized President Donald Trump for his racially divisive rhetoric.

“With Pop and Becky standing, I have no thoughts (contrary to) belief in them that is all out of genuine, out of a positive side of their heart,”  Spurs forward DeMar DeRozan said. “Same way we kneel. Don’t take away nothing from those guys. Pop speaks out. When it comes to Becky, she’s been (on the) front line, fighting for equality since I’ve been a fan of hers playing in the WNBA. So everybody has their own right of making a statement and you can’t vilify nobody for not doing what the other group is doing. I’m all for it.”

What is the NBA’s official stand on kneeling?

Speaking on the league’s policy regarding the National Anthem, NBA Commissioner Adam Silver said that the league isn’t planning to enforce its pre-existing rule which requires players to stand for the National Anthem. He said: “I respect our teams’ unified act of peaceful protest for social justice and under these unique circumstances will not enforce our long-standing rule requiring standing during the playing of our national anthem”.