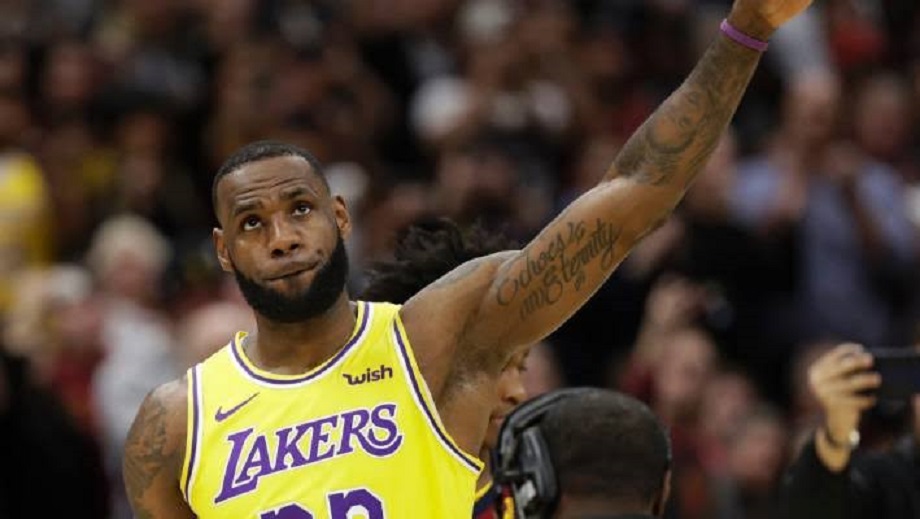 Ever since LeBron James was selected first overall in the 2003 NBA Draft by the Cleveland Cavaliers, he has been like the unofficial king of the city of Cleveland. And the self proclaimed ‘chosen one‘ has gone on to become the greatest one. He left the team in 2010 for the Miami Heat, came back in 2014, ended the city’s 52 year championship drought in 2016 and after four successive finals trips with the Cavaliers, joined the Los Angeles Lakers in the summer of 2018.
Even though he left Cleveland, he has still been actively involved in the community, opening his I Promise School recently. So it was only fitting that his return to the city to play against his former team seemed like the return of a king.
The celebrations were kicked off during the line up introduction before the game. Arena announcer Sean Pebbles introduced him last for the Lakers and said: “A 6-foot-8 forward from St. Vincent-St. Mary’s High School. Welcome home! LeBron James.”

The fans in the stand responded positively and roared in approval as James went into the huddle with his teammates. Cavaliers’ coach Larry Drew also chipped in before tip off: “We recognize the fact that certainly this is a big night for the city of Cleveland, because a hero has come back.”
The Cavaliers also prepared a moving video tribute for LeBron James. It was played during a timeout with a little over eight minutes to go in the first quarter. The video didn’t just feature his on court triumphs with the Cavs (most notably the legendary come-from-behind series victory against the Golden State Warriors in the 2016 NBA Finals), it also showcased his contributions to the Cleveland community via the I Promise School.
LeBron James himself was very touched by the hero’s welcome that he received at the hands of the Cleveland fans. He chimed in: “To come back and get the reception I got, it means a lot not only to myself but my family. My 11 years I played for this franchise I tried to give everything I could on and off the court.”
The celebratory atmosphere of this night was in stark contrast to his return on December 2nd, 2010 as a Miami Heat player for the first time. The city of Cleveland hadn’t taken kindly to his infamous ‘Decision’ and had lashed out. Lots of former fans burned their LeBron James jerseys, called him a traitor and accuses him of quitting on the team. So that night, LeBron James played through a toxic atmosphere charged with hatred and contempt towards him. The fans booed non stop and attacked him with profanity laced tirades throughout. Needless to say, it was ugly.
Wednesday night’s game proved that both LeBron James and the city of Cleveland have moved on. The fans are completely appreciative of his contributions to the team and the city of Cleveland and their behaviour cemented the fact that LeBron James will always be welcome in the Quicken Loans Arena and the city.
James also played a great game. Scoring 32 points and grabbing 14 rebounds while leading his new team to a 109-105 victory over his former team.
After the Cleveland Cavaliers took a 96-87 lead behind back-to-back threes from Jordan Clarkson, LeBron James sparked an 18-6 Los Angeles Lakers run with a dunk, three point shot and four free throws to seal the game.
After the victory, James had this to say: “We cranked up our defence in the fourth quarter. They played a heck of a game but we kept our composure. We’re a young crew. We keep getting better.”
After a slow start to the season, the Los Angeles Lakers have now won six out of their last seven games, improving to a 10-7 record, the team’s best since April 2013, which is currently good enough for seventh place in the Western Conference Standings. The Cleveland Cavaliers on the other hand, look well on their way to land the first pick of the 2019 NBA Draft by falling to a league worst 2-14.