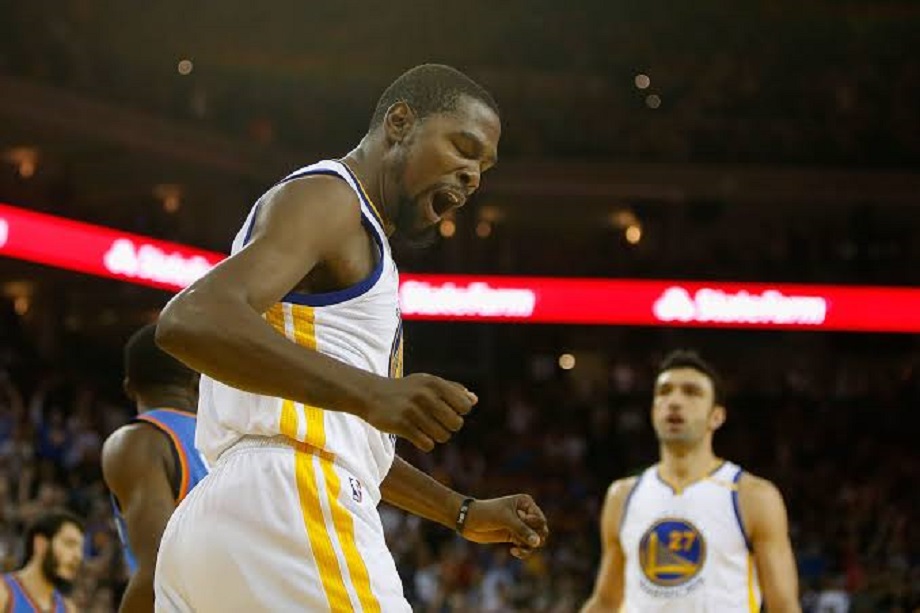 The NBA League Office slapped a $25,000 fine on Golden State Warriors superstar forward Kevin Durant for landing a barrage of obscenity laced words towards a heckling Mavericks fan during the Warriors’ 109-112 loss in Dallas on Saturday.
Tabloid news website TMZ published a video via its TMZ Sports arm which showed Kevin Durant walking towards the spectator’s courtside seat and openly saying: “Watch the f*****g game and shut the f**k up.”
The expletives laced line was a result of Durant’s frustration boiling over after being repeatedly taunted with the word ‘cupcake’ since the start of the game.
In technical terms, the violation was ‘for directing inappropriate language towards a fan’. The incident took place with 61 seconds remaining in the first quarter of the game.

Ever since Kevin Durant left Russell Westbrook and the Oklahoma City Thunder to join forces with the 73 win Golden State Warriors team after the 2016 NBA Finals, critics and fans alike have questioned his integrity and strength of character. He has been accused of taking the easiest way to a championship by joining a team with three All Stars Stephen Curry, Klay Thompson and Draymond Green. ESPN’s analyst Stephen A Smith called his signing with the Warriors “the weakest move by a superstar in NBA history”.
When it became common knowledge that he didn’t even inform Russell Westbrook about his decision to leave the Thunder before announcing it publicly, lots of fans on social media started calling Durant a ‘snake’ and using the snake emoji to describe Durant. Durant’s response to that, which included him creating burner accounts and arguing with fans online, only exacerbated the situation. Such extreme sensitivity to social media criticism led to people calling him ‘cupcake’.
Even winning back to back championships and Finals MVPs with the Golden State Warriors has not reduced the amount of criticism that Durant still receives everyday. Most of it is destructive, insulting criticism and Kevin Durant’s persistence towards arguing with people who criticise him will ensure that insults such as snake and cupcake continue to be hurled towards him.

NFL: 5 Reasons Why Rams vs Chiefs Was More Than Just a Game