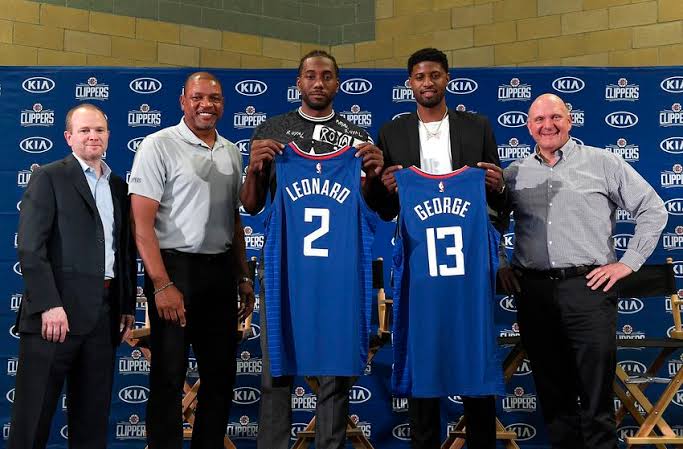 The Los Angeles Clippers owner Steve Ballmer, who is not only the richest owner in the NBA, but also the most expressive. And he was his completely expressive self while introducing his prized acquisitions, Kawhi Leonard and Paul George.

After the introduction session, Leonard and George sat down with ESPN‘s Rachel Nichols for an interview. Leonard talked about the fact that he was very close to signing with the Lakers during free agency. He said: “I was very close. Real close. But when (the Clippers) presented the opportunity of playing with Paul it was easy, it was a yes. I said let’s get it going.“

Leonard also expressed his excitement about playing with a player of George’s calibre for the first time in his life. During his introductory press conference, Leonard said: “This is probably going to be my first time playing with an elite player on his level around the same age as me, same talent. I’m excited.“

A lot has been talked about how Leonard’s camp allegedly fooled the Los Angeles Lakers during free agency and just led them on. However, Leonard shrugged that off as something he would never do. “I just feel like that’s just bad karma. If they didn’t want to wait for me, they didn’t have to. They had a big opportunity to sign me. I was close, but I ended up on the other side.“

A lot of people were also surprised by Paul George’s shocking trade request from the Oklahoma City Thunder. However, George said that this move wasn’t random and a part of his plan at OKC. George said: “This was nothing that came out of the blue. The initial plan was to give it another year, see what we could do. I did that. Played another year, and it felt like we were just stagnant. Next thing was, let’s go forward and go on with other plans.“