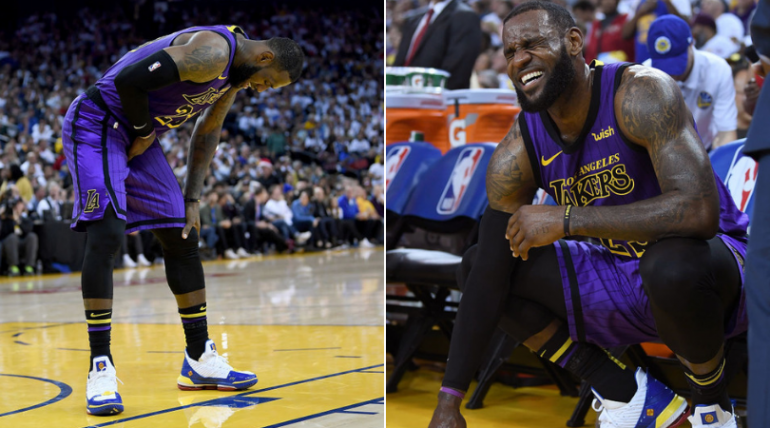 Perhaps nothing impacts betting predictions as drastically as injuries in the NBA . The unexpected loss of a superstar player can turn the odds upside down. As an example, let’s take a look at the state of the 2018-19 season for the most glamourous NBA franchise, the Los Angeles Lakers. After a dreadful 2017-18 season where they finished 11th in the Western Conference, they were only given a 0.9% chance of making the playoffs in the current season. After they managed the sign the best player in the NBA, LeBron James via Free agency, their chances of making the NBA Playoffs were bumped up to 97.1%. That’s a staggering jump for a team filled with unproven young players which had missed the playoffs since 2013.
Things went off to a slightly shaky start until LeBron James started asserting himself as the best player in the game and soon the Lakers held the 4th spot in the Western Conference Standings. However, on December 25th, during a Christmas Day game against the defending champions, Golden State Warriors, James hurt his groin (an area that has troubled him in the past) and missed 18 games as a result of that. To worsen the situation, point guards Rajon Rondo and Lonzo Ball also got injured during this time. Consequently , the Lakers slid from 4th in the standings to 10th. And as things stand today, the Lakers only have a 26 % chance of making the playoffs. That’s a staggering drop of 71 percentage points! To keep up with the predictions and odds for the Los Angeles Lakers’ upcoming schedule, check this out.
Such instances of a significant change in the winning expectancy and points spread have happened in the past also. When former league MVP Derrick Rose went down with an injury during the 2012-2013 season, the Chicago Bulls’ points spread line moved by 4.5 to 5.5 points. The same season, when superstar point guard Chris Paul of the Los Angeles Clippers went down with injury, the points spread line only moved by 3 points. This doesn’t necessarily mean that Derrick Rose is a significantly better player than Chris Paul, it just means that he is more valuable to his team. Partly because the Clippers’ back-up point guard Eric Bledsoe was considered a superior player to the Bulls’ back up point guard, C.J. Watson.
Now, if all the betting terms used so far (and the ones you have encountered in your life) have left you scratching your heads, don’t worry, this post has got you covered. Sports betting usually involves ‘odds’. A lot of time, during any pre-game coverage (regardless of sport), you might have read that the odds of Team A to win are 2-1 (sometimes mentioned as 2/1) and the odds for Team B to win are 15-1. Don’t let these numbers confuse you, it’s actually quite simple. If you bet $10 (or any other currency) on Team B and it wins, you will get $150 (15 times the money you used for betting) plus your original $10 back. So, in total, you would’ve earned $160 by just making the clever but correct prediction. Clever because usually the better team has a higher chance of winning and betting on it doesn’t usually give very high rewards. For example, if you had bet $10 on Team A and it actually won, you would’ve only ended up with $30 at the end. Since you predicted an upset and bet on the inferior team, you actually ended up with $130 more.
Generally, while betting in basketball, you need to bet on the number of teams and the ‘point spread’ of a particular game. The team that you bet on, must ‘cover the spread’ which means it should win or not lose by a predetermined margin of points. For example, if the Golden State Warriors are playing the Charlotte Hornets and the point spread is -3 in the favour of the Warriors, you will win your bet on the Warriors if they win by 4 points or more. If you bet on the Hornets, you can win your bet in two ways:

If the Warriors win by exactly 3 points, then the bet is declared a ‘push’ and all money is refunded. The point spread is not permanent and it keeps changing during a game.
Remember, winning bets on NBA games (and any other sport) is not just based on luck. You need to understand the situation and terms carefully before you put your hard earned money on the line. As a constant source of information, you can use these forums to get tips and ideas in the extremely dynamic world of NBA betting.

Snake on a Plane: Scottish Grandmother accidentally brings home a Snake coiled in a Shoe!

4 Unusual Sports You Can Bet On