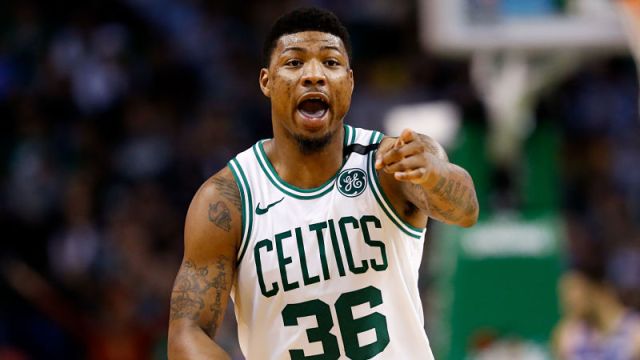 May 9, 2018; Boston, MA, USA; Boston Celtics guard Marcus Smart (36) reacts during the second half against the Philadelphia 76ers in game five of the second round of the 2018 NBA Playoffs at the TD Garden. Mandatory Credit: Greg M. Cooper-USA TODAY Sports

The 2018 NBA Free Agency started with a bang. The biggest names on the board, LeBron James, Kevin Durant, Paul George and Chris Paul were snagged immediately. A little later during the week, All NBA center DeMarcus Cousins shocked the world by signing a 1 year deal with the supremely talented Golden State Warriors. After a whirlwind first week, things have started slowing down. However, some major questions still remain unanswered.
While veteran Carmelo Anthony is involved in buyout talks with the Thunder, so that they can save upto $116 million in luxury tax, Marcus Smart and Clint Capella lead the list of the best free agents still available in the market. These two are not franchise-altering, superstar-calibre talents but they will be invaluable role players on any team. Both of these players are known for their toughness, tenacity and a very strong motor which never stops.
Here’s a list of what’s currently brewing in the Free Agency market in general:

1. Kings about to make an offer to Smart

After failing to land Zach LaVine, the Sacramento Kings have set their sights on acquiring the services of Marcus Smart. The Celtics have made a qualifying offer of $6.1 million to Smart and the Kings will be hoping to make one which the Celtics can’t match.

After losing Trevor Ariza to the Phoenix Suns, the Houston Rockets suffered another blow to their depth when versatile forward Luc Richard Mbah a Moute agreed to a 1 year deal with the Los Angeles Clippers.

One of the most offensively talented centers in the league, Brook Lopez has decided to leave the Lakers to join forces with the Greek Freak Giannis Antetokounmpo and the Milwaukee Bucks on a 1 year, $3.4 million deal.

5. Pachulia to the Pistons

The tough-as-nails, somewhat ‘dirty’ big man, Zaza Pachulia from the Golden State Warriors has signed a 1 year deal with the Detroit Pistons, a franchise notorious for its aggressive defensive players such as Bill Laimbeer, Isaiah Thomas, Rasheed Wallace and Ben Wallace.