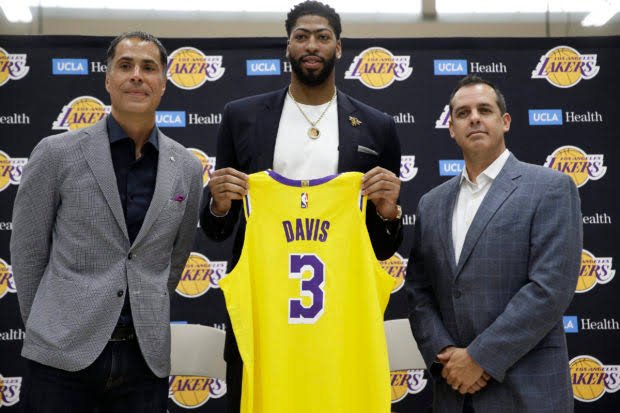 After a blockbuster trade which saw the Los Angeles Lakers give away just about everyone on the roster and multiple draft picks to land him, Anthony Davis was officially introduced as a member of the team on Saturday at the Lakers training facility. Davis, who wore number 23 while he played for the New Orleans Pelicans, has switched to number 3, a number he wore during his elementary school days. Initially, LeBron James had agreed to give up his number 23 jersey for Davis but financial conflicts with Nike resulted in that plan being shelved. Nike had set March 15th as last date for a jersey number change and a change now would’ve cost Nike tens of millions of dollars and led to a lot of disgruntled fans who had already bought James’ number 23 jersey.

Taking the number all the way back to elementary school! #3

Soon after sharing this image, Davis shared this image of him wearing number 3 with his 7th grade team.

Numbers aside, Davis has a tall task ahead of himself in the 2019-2020 NBA season. Lakers GM Rob Pelinka has said that ‘anything short of a championship is not success’ this season and Davis has seconded that by saying that he will take his roster over any other team’s in a seven game series. However, with the Los Angeles Clippers acquiring Kawhi Leonard and Paul George, and the Houston Rockets getting Russell Westbrook for Chris Paul via trade, the Lakers are not going to be considered the heavy favourites to win the title anymore. James is going to be 35 midway through the season and Davis has played 68 games or less for five out of his seven NBA seasons. Even a minor injury can derail the Lakers season in the West, which is really, really wild now.