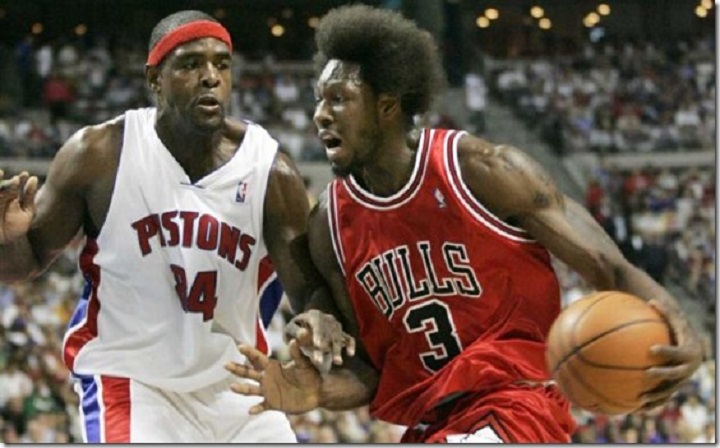 As a Hall of Fame, the Naismith Memorial Basketball Hall of Fame is not really hard to get into, especially when compared to other professional sports Halls of Fame. Most players with a good career tend to get into the Basketball Hall of Fame, unlike the Pro Football Hall of Fame where you have to be truly exceptional to be enshrined. The basketball hall of fame is so notorious for the ease with which it enshrines players that renowned sports analyst Skip Bayless always says this about it: “Everyone gets in there [Basketball Hall of Fame].”
However, despite the ease of entry, there are a bunch of great players and  former all stars who played for a long time and yet they are not in the Hall of Fame. Today we will look at three such players. Some of the players on the list might eventually get in during years when the competition isn’t very tough but as of now they are not in the Hall of Fame. This list will also exclude recently retired greats like Tim Duncan, Kobe Bryant and Kevin Garnett who are not eligible for Hall of Fame consideration until the year 2020.

Penny Hardaway was a legitimate superstar in the NBA and during the 90s, he teamed up with Shaquille O’Neal for the Orlando Magic to form one of the most formidable one-two punches in NBA history. However, his prime years were cut short because of injuries and by the age of 26, he had regressed into a role player. His injured knees derailed his potential hall of fame career because if he stayed healthy, he would’ve undoubtedly been a first ballot hall of famer. Between 1995 and 1998, he was a four time All Star and made three All NBA teams. His Anterior Cruciate Ligament (ACL) injury made him one of the greatest cases of ‘What if’ in NBA history. As per his hall of fame credentials, he lacks the longevity or the sheer numbers, however, Bill Walton‘s career was also excessively hampered by injuries and he is in the Hall of Fame as well as a member of the NBA’s 50th Anniversary Team. However, Walton won a title for the Portland Trailblazers which Hardaway wasn’t able to do for the Magic.

Statistically speaking, the five time All Star, five time All NBA and Rookie of The Year Webber should definitely be in the Hall of Fame. At his peak, he was a top 3 Power Forward in the league, while playing in the same conference as Tim Duncan and Kevin Garnett. He was also the undisputed leader and best player of the great Sacramento Kings team of the early 2000s. He was also a great high school basketball player and had a very successful college career as a member of the University of Michigan’s ‘Fab Five’. Even his contemporary and rival Shaquille O’Neal has expressed his displeasure at Webber being constantly snubbed by the Hall of Fame.
However, Webber has also been involved in some controversies throughout his career. Most notably, the Ed Martin Scandal, the biggest college basketball scandal in history. Webber was the main player involved in it and was caught lying to the grand jury. As a result, his college career along with the achievements of the Fab Five were officially erased from the history books. This might not be the definitive reason behind Webber’s absence from the Hall of Fame. However, it will be unrealistic to imagine that it has no impact on the mindset of the Hall of Fame voters.

‘Big Ben’ Wallace has now missed the Hall of Fame cut for two years in a row. How the 2004 NBA champion, who is also a four time Defensive Player of the Year, four time All Star, five time All NBA and six time All Defence has not made the Hall of Fame, is confounding. His resumé is more stellar than that of many players who are currently in the Hall of Fame. In addition to that, Wallace is also the greatest undrafted player to have ever played in the NBA.
The most important reason behind Wallace being snubbed will definitely have to be the fact that the NBA views defensive players differently. Wallace never put up big scoring numbers and that will definitely have an impact on the Hall of Fame voters. Even Dennis Rodman had to wait 11 years before he was enshrined into the Hall of Fame. Hopefully, Wallace won’t have to wait for that long.

3 Star Athletes Who Failed At Their Second Sport

Jon Moxley: A Lunatic’s Journey Through the World of Pro Wrestling