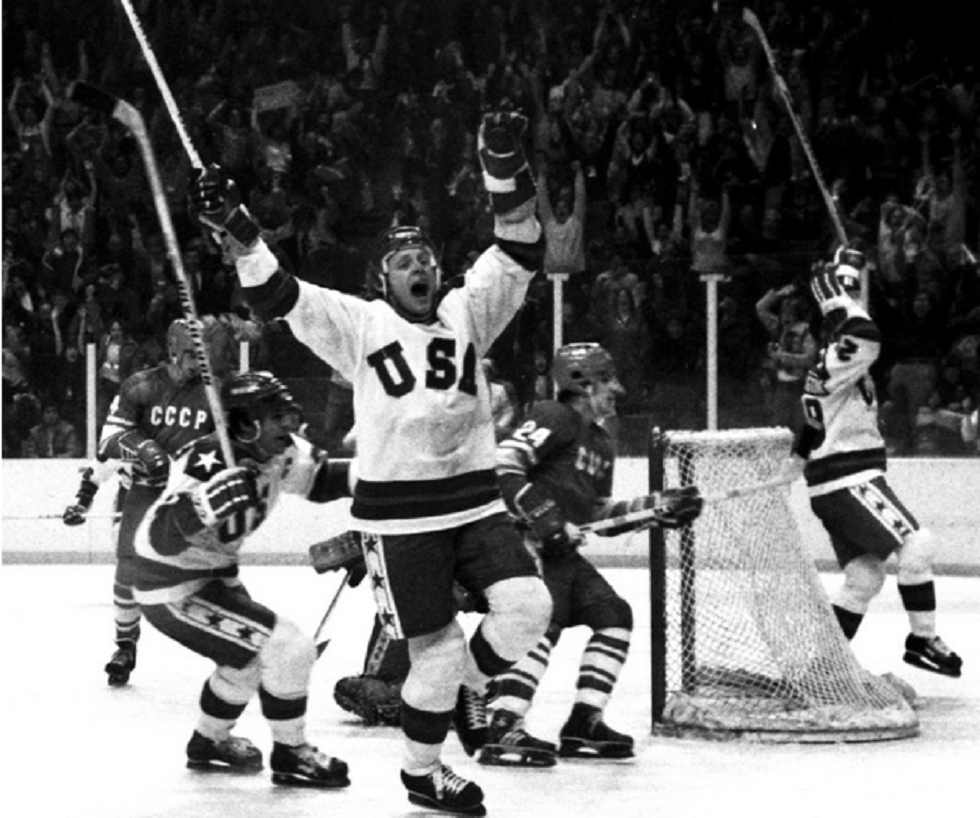 At the beginning of the 80s, the Cold War situation was really tenuous. The doomsday clock was being shifted closer to 12 every other day and the USA and USSR were testing earth shattering weapons everyday. On February 22nd, 1980, almost two months after the Soviet invasion of Afghanistan, a hockey team comprised of American college players defeated a dominant Soviet Union group made up of professional athletes. They were designated as engineers, students, soldiers etc. to retain their amateur status. This ‘Miracle of Ice’ took place during the Winter Olympics in Lake Placid, New York. ABC’s Jim McKay summed up this monumental event as: “That may be the greatest upset in sports history.” He went on to add that this upset was equivalent to an All Star Football Team of Canadian college boys beating the Steel Curtain Pittsburgh Steelers of the 70s. The team which featured ‘Mean’ Joe Green, Jack Lambert, Jack Ham, Terry Bradshaw and Mike Webster had won four Super Bowls in six years during the 70s.

Miracle on Ice: What happened and what is its legacy?

What is the Miracle on ice?

Stranded in a hotel in North Dakota, Jason Fairman and other players on the University of Denver men’s hockey team were crowded into the hotel room. A typical North Dakota snow storm blew through the town the night before and therefore the team was informed it might not be leaving for 2 days.

Fairman and the other 10 men in the room huddled around the lone television set. On came “Miracle on Ice,” the first 1981 film depicting the magical 1980 U.S.A. men’s hockey team’s win against the heavily-favored Soviet Union in the Winter Olympics on its way to an eventual gold medal.

Alongside Fairman was his roommate, Dan Brooks, and he wasn’t shy offering his input on the film. Of course, Brooks had heard second-hand of what happened from his father, Herb, who was the top coach of the infamous team .

Fairman remembered the time when he learned about the game. It was on tape delay, so it was just his luck that someone ruined it by telling him the outcome. Nevertheless, he felt the national pride that the majority others within the country felt.

Fairman spoke about people’s reaction to the Miracle on Ice: “I think tons of people got to realize what an enormous upset that was, I was too young to have anything other than national pride.”

What the Miracle team did for Fairman, it did for Americans all across the state. It raised their spirits in a time when international relations were characterized by high tensions during the Cold War. Considering the surrounding circumstances, the U.S.A.’s victory could be regarded as the single most important sports event of the 20th century.

The story appeared like one straight out of a book. The Soviet Union manhandled the U.S.A. team 10-3 just a couple of days before the Olympics were slated to start in Lake Placid, New York. The Soviet Union at that point had won four straight gold medals over the last four Winter Olympic Games. Their dominance in the world of hockey was almost comical. Teams would struggle to even get close to the Soviets during games. But during the 1980 Winter Olympics, the amateur U.S.A. team composed of collegiate hockey players made it to the semifinal and earned another shot at the perennial champions.

U.S.A would fall behind 3-2 in the first two periods, but after a goal to tie the score, Mike Eruzione found the back of the net for the fourth and game-winning goal. With seconds left to travel within the game, broadcaster Al Michaels delivered the famous line, which helped give this wonderful sporting event the nickname: Miracle on Ice.

“Do you believe in miracles?! Yes!”

Miracle on Ice: A Cold War on ice

The 1980 Winter Olympics were held in a time of political turmoil between the two superpowers, the U.S.A. and the Soviet Union. It was just following the start of what some people called “The Second conflict .”

In the period leading up to 1979, the Cold War had quietened down. Throughout the 1970s there had been few major crises between the two countries and there were actually the beginnings of friendship talks between the two sides.

That all changed in December of 1979 when the Soviet Union invaded Afghanistan. The U.S. government had given support to Afghanistan before the invasion, aiding the anti-communist fighters. The invasion set off a large chain of events that would spin both countries into a tension-filled climate that extended through the 1980 Olympic Games.

Sports were no exemption from the Cold War, in fact, they were at the forefront for one of the sides, the Soviet Union. There were many instances during the Cold War when athletes from the Soviet Union were given various human growth hormones to improve performance, especially female athletes.

Speaking on the sports system of the USSR, Iowa State University’s politics professor Richard Mansbach said: “The Soviet’s sports system was established throughout the summer and winter games with explicit aim of winning for reason of prestige to prove that the Socialist regime were superior to the Capitalists.”

That precious Soviet prestige was even more valuable when hockey was concerned.

The Soviet Union had dominated the international hockey scene in the years prior to 1980, winning five gold medals in the previous six Olympic Games. Heading into the 1980 Olympics, the team had to have one thing on its mind, winning another gold medal.

As the date of the matchup neared, the press was buzzing with the importance of this game in hockey, as well as the international political scene.

Draped within the irony of the conflict playing out on actual ice, the U.S. pulled off the improbable upset and continued on to beat Finland in the Gold medal matchup.

What it did for the people of America and therefore the American Administration was far more profound.

“It enhances the reputation of the administration, even though it had nothing to do with it. Simply, citizens bathed in the glow [of the win] that somehow capitalism, Americans [and] the Free World had won some sort of significant, symbolic victory,” Mansbach said.

Ask any American ice-hockey player about the story of the USA team’s triumph in the 1980 Olympics, and they will immediately tell you some stories from their childhood or a story from their father who watched the game. They will be the first ones to tell you how important that game was to the country and how important it was in their career.

The 1980 Olympics are seen to some in the industry as the “turning point” in the lifeblood of America’s hockey program. Rather than only the northern states, which had a culture inbuilt round the sport, participating in hockey, the bulk of other states also joined the youth crusade of hockey players. Needless to say, Hockey in America was never the same after the Miracle On Ice.