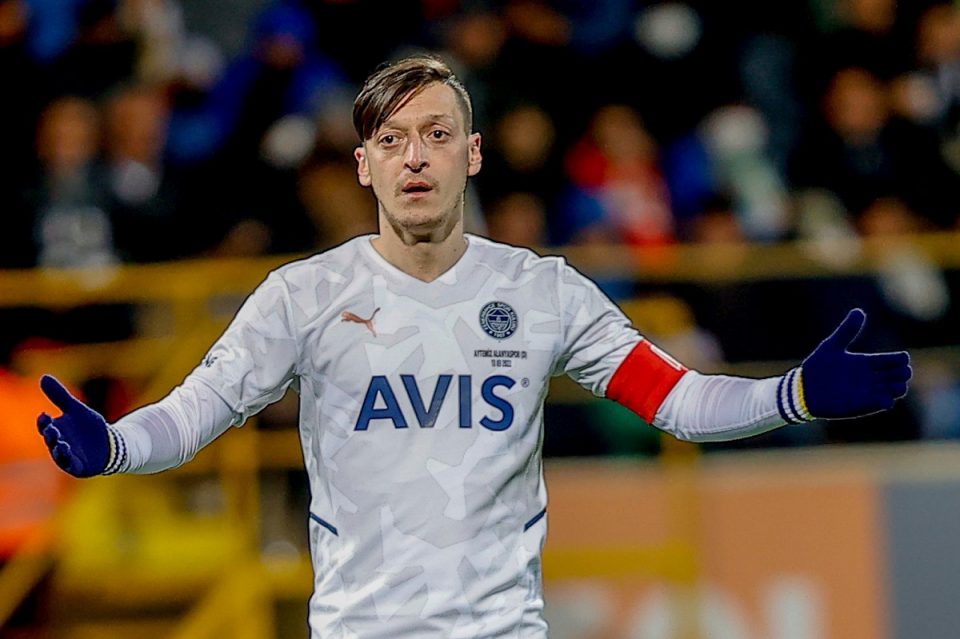 The affair around Mesut Özil, the midfielder of the German team of Turkish origin, continues to create a stir even during the 2022 World Cup. But to understand what’s going on we have to go back to certain events that occurred in 2018.

In July, German player Mesut Özil retired from international football following a stir over a snapshot taken alongside Turkish President Erdogan. Until then silent and targeted by accusations of racism on the part of the player, the president of the powerful German Football Federation (DFB), publicly regretted not having come to the defense of Özil.

“As president, with hindsight, I should have said without ambiguity what is obvious to me and to the whole Federation: any form of racist harassment is intolerable, unacceptable and intolerable,” wrote Reinhard Grindel in a message.

So we can understand that the German leader acknowledged that his call to order was a little too late, specifically when it came to saying sorry to the Turkish origin after a controversial photo had been “hijacked for racist remarks”.

Mesut Özil had posed in May alongside Turkish President Recep Tayyip Erdogan which ended up becoming a controversial cliché and perceived very badly in Germany.

At the end of the press release, the one who was still presented a few months ago as an example of integration through sport had meant the end of his international career after 92 caps and 29 goals. In the meeting with Erdogan, which was not the first, Özil had specified that he had accepted him because of his family and cultural heritage.

3. THIS typical racist cliché is the origin of the controversy.

The accusations of racism brought against Mesut Özil were summarized in his own words:

“In the eyes of Grindel and his supporters, I am German when we win, but I am an immigrant when we lose”.

Clearly, this is a tense sporting and political context as the footballer is actually third generation Turkish living in Germany like his forefathers did. If the meeting has taken on such proportions, it is because it occurs in a critical political or  tense sporting context.

On the ground, the German national team was eliminated from the group stages of the World Cup in Russia, a first since 1952. The press pointed the finger at the player of Turkish origin as one of the main ones responsible for the loss. Some titles even go so far as to question the commitment of the 2014 world champion for Germany, especially after the famous shot.

Politically, the question of migrants and their reception has become a hot topic. Ironically, Germany and Turkey are candidates for the organization of Euro-2024, the award ripe with controversy

Controversy followed again after a tweet posted by Mesut Özil (now a player of İstanbul Başakşehir F.K.) but in 2019 he belonged to the English football club Arsenal, and in which he criticized China’s repression of the Uighurs.

Outraged, Beijing banned the broadcast of an Arsenal match in China, while his club distanced itself from the remarks made by the footballer. While some editorialists salute Özil’s courage, others doubt his real intentions.For example, Irish Times welcomes Özil’s position and calls on other personalities to follow suit:

“Criticizing the crackdown on the Uighur minority China’s reaction to the footballer’s tweet shows how sensitive the country is to foreign commentary on human rights abuses in Xinjiang province. And how important it is for the rest of the world to talk about these persecutions. In an industry like top-flight football, where players are afraid of incurring the wrath of their sponsors and fans, there is often a fear of provoking even the smallest controversy. Arsenal player Mesut Özil has bravely taken to social media to express his outrage at the mass detention of Uighur Muslims. His employers have not shown the same courage”, said the statement.

Özil says he is not a human rights defender, but a defender of his religion. This did not sit well with newspapers.

“For the friend of Erdoğan who took the autocrat as a witness for his wedding, who played a nationalist song there and who was never moved by the persecution of dissidents or ethnic minorities in Turkey, the taking of position is surprising to say the least. Human rights in general do not concern him too much. What he condemns above all are the burning of Qurans and the closing of mosques and religious schools. The use of the term ‘East Turkestan’ [to designate the province of Xinjiang] will also surely have pleased Erdoğan

Following the controversy over the photo taken alongside Erdoğan, who had taken on racist overtones, the former German national club player had been forgiven for his misbehavior, invoking a young brainless, the cliché of the somewhat naive but altogether apolitical footballer. This image has become obsolete: to write what he wrote or caused to be written, one must be a religious nationalist.

7. Mesut Ozil says: “In Islam, there is no place for terrorism”.

The Arsenal player expressed his feelings about the anti-Muslim discourse in Europe and increasingly present anti-Islam.

It is with these words: “In Islam, there is no place for terrorism” that the German footballer of Turkish origin from Arsenal wanted to express his feelings about the anti-Islam and anti-Muslim discourse that is increasingly present in Europe.

Mesut Ozil was then 32-years-old and even shared a verse from a Surah in the Quran on a social media post.

This tweet from Ozil was very quickly a hit with Internet users, liked and retweeted many times.

This message from Ozil comes after the highly controversial statements of French President Emmanuel Macron and other officials on Islam and Muslims, the debates around the republication of cartoons of the Prophet Mohammed, and the attacks that have taken place in France in 2019.

8. In 2019: Mesut Özil has dinner with Erdogan to break his Ramadan fast.

When former German international Mesut Özil broke his Ramadan fast with Turkish President Tayyip Erdogan, it created a lot of talk within the football world once again provoking strong reactions after previous controversies.

Images released by Turkish media show Erdogan sitting at a table between a smiling Özil and his partner, Turkish model Amine Gulse, at Dolmabahce Palace, the former administrative center of the Ottoman Empire in Istanbul.

In another photo, Özil and Gulse sit with Erdogan in a room joined by Fahrettin Altun, the chairman of the Turkish Presidency’s Communication Office.

9. Once again, Özil is strongly criticized for his relationship with Erdogan.

By 2020, Özil was heavily criticized in March after inviting Erdogan to his summer wedding to the former Miss Turkey.

The Arsenal player had already caused controversy in 2019 after being photographed offering a shirt to Erdogan, a controversial figure in Germany, who has been at odds with Chancellor Angela Merkel’s government for more than two years.

A long and nauseating controversy over the Turkish origins of the player playing in the English championship then shook Germany.

After the German national team player’s sporting failure at the 2018 World Cup in Russia, Özil had definitively slammed the door of the national team, accusing the German Football Federation of racism.

The funny thing is that Ozil was born in Gelsenkirchen, Germany in the Ruhr basin (west) as a third generation immigrant and does not have Turkish nationality.

10. The 2022 World Cup: Qataris cover their mouth during Germany’s match.

Arab and Qatari fans hold up photos of Mesut Ozil during Spain-Germany. They wanted to send a message to all German players who started in the Group E match against Japan. The Germans decided to protest FIFA’s OneLove armband ban by covering their mouths during the team photo. Clearly they did not have local supporters.

Interestingly, Germany, England, the Netherlands and other European nations had planned to wear the armband in solidarity with the LGBTQ+ community, but backtracked following the threat of sporting sanctions. The German federation will sue FIFA before the Court of Arbitration for Sport for this ban.

Özil, a symbol of hypocrisy?

At World Cup 2022 on November 27th, Arab fans were aiming to highlight what they perceived to be a double standard policy on the part of the protest by pointing out Ozil’s comments about racist treatment

Four years ago, Ozil decided to retire from international football. The former Real Madrid and Arsenal player attributed the decision to unfair discrimination linked to his meeting with Turkish President Recep Tayyip Erdogan.

The photo of Ozil and Erdogan, as we mentioned above, had been highly controversial leading to a lengthy statement on Ozil’s Twitter account stating he would no longer play for the German national team due to the “racism and disrespect” he feels he has experienced.

The midfielder wrote: “For me, having a photo with President Erdoğan had nothing to do with politics or elections, it was about respecting the highest office in my family’s country.”

“My job is that of a football player and not a politician, and our meeting was not in support of any policy. The treatment I received from the DFB and many other people makes me want to stop wearing the German national team shirt.

Ozil, who made 92 appearances for Germany during a nine-year spell, criticized former DFB chairman Reinhard Grindel in the post. “People with a history of racial discrimination should not be allowed to work in the world’s largest football federation which has players from dual heritage families,” he wrote. “Attitudes like theirs just don’t reflect the players they’re supposed to represent. In the eyes of Grindel and his supporters, I am German when we win but I am an immigrant when we lose”.

He added: “It is with careful consideration and a heavy heart that due to recent events, I will no longer play for Germany at an international level as long as I have this feeling of racism and disrespect.

“I used to wear the German shirt with so much excitement and pride  but now I feel unwanted and think what I have achieved since my international debut in 2009 has been forgotten”.

Ironically, after the Germany national team decided to cover their mouths against the armband ban in protest, the team commented on the gesture saying:

“This was not about making a political statement – ​​human rights are non-negotiable and to deny us the armband is to deny us a voice. We remain true to our position”.

“We wanted to use our captain’s armband to take a stand for the values ​​within the German national team: mutual respect and diversity. But the same can’t be said towards German-Turkey immigrants who happen to become football players.

Why Has Twitch Banned Gambling on Its Platform?

Was The French Team Strong Enough To Play The World Cup Finals?