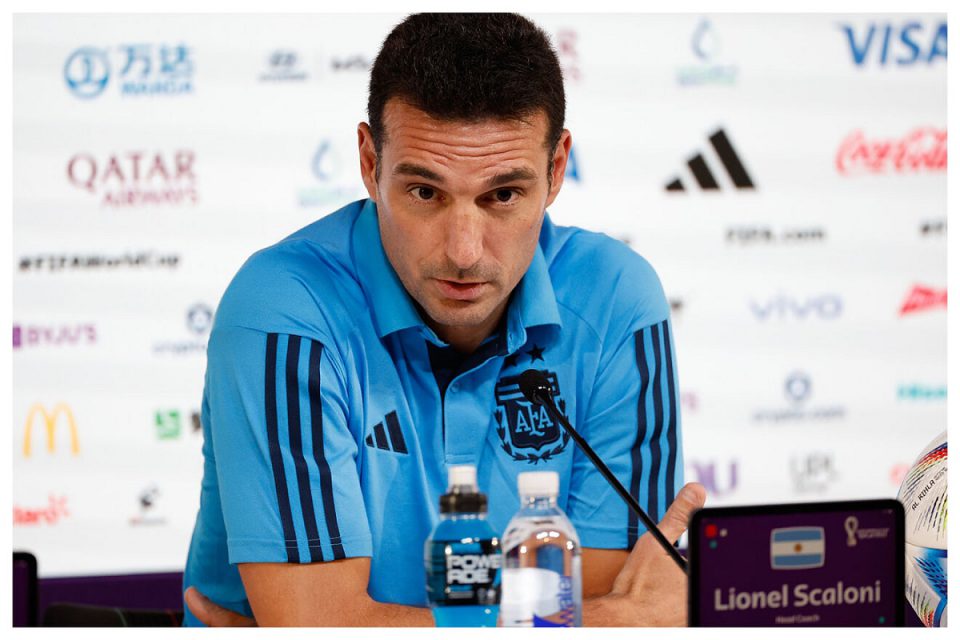 Lionel Scaloni, who knew how to win the America Cup or Copa America against Brazil at Maracana and the UEFA Cup of Champions against Italy at Wembley with a recognizable style, has had the lucidity to part with his own scripts to get the most out of his team’s potential on the most demanding stage for any manager. What’s his secret? Well, Scaloni’s game plan rescues the most essential features of football. He does not fit into any philosophy and he made sure that Argentina always moves to the rhythm of the ball. The final match between France and Argentina on December 18th was faithful proof that Argentina does not depend on any system nor is conditioned by a specific strategic plan. Any tactical disposition that Lionel adopts is asymmetrical, the footballers under him and their mobility (with or without the ball) are the ones who give meaning to a performance that stirred the hearts of many during the 2022 World Cup. Let’s take a look at the Argentinian coach’s concepts, ideals, career trajectory, and more!

Lionel Scaloni: From Mockery To The Most Successful Football Manager (8 Key Facts)

In a World Cup in which Germany, Belgium, and Uruguay were eliminated in the first round; With candidates like Brazil and Portugal saying goodbye prematurely in the quarterfinals, Argentina has passed all its exams with the help of a newbie?

Having never led a professional team as a head coach, the Argentinian was named interim national team coach in August 2018 to succeed Jorge Sampaoli. An interim which has been extended and which led him to the final of the World Cup, on December 18, while critics rained on his appointment.

2. Maradona said Scaloni can train a motorcycle team, not football:

In 2018 after being appointed interim first team coach, for two friendly matches against Guatemala and Colombia, without ever having had a professional team under his command prior to that – Lionel was criticized.

The inexperience after the elimination of Argentina in the round of 16 of the 2018 World Cup included fairly harsh words from Diego Maradona. “In Argentina, we have Scaloni as a coach. It’s not his fault for being there, they pushed him. But the issue is that he thinks he’s a coach and he desires to go to the World Cup. A World Cup of motorcycles yes, but no football. It makes me very angry that we have to depend on a technician who I doubt will be able to win a title”, said the Argentinian legend.

Today, Lionel is a technician who we didn’t know would win titles like a third place at the Copa America in 2019, a streak of 36 games without defeat, a Copa America victory in 2021, and now a World Cup final.

3. His coaching adventure began in Mallorca in 2015:

The former professional player, who went through Deportivo La Coruña (Spain tier 3 football league) and Lazio in Rome, began coaching in Mallorca (Spain), where he has a residence as well.

“Lionel was at a time in his life when after his football career ended, he didn’t know what to do and therefore he decided to become a coach. He needed hours of practice and we had a friend in common. So he asked me if he could join us”, says Juan Munoz, the president of Son Caliu CF, a neighborhood Spanish club.

Juan then entrusts Lionel with the team of cadets (under 14), who play in the regional championship of the island.

“The first thing he said to me when he arrived was that he wanted to learn with us”.

In the Son Caliu club, his past as an international player is the highlight and admiration of the players.

“The young footballers listened with great attention to him. They learned a lot with him and a few years later, they still have very good memories of him. He was very involved. He also accompanied them on beach outings and was ready to travel miles to take players or staff members to matches. Today, some of our players can say to themselves that they had the same coach as Leo Messi, it’s incredible”, stated Juan Munoz in hindsight fascinated with this thought.

In 2016, Jorge Sampaoli, then coach of Sevilla FC, called Lionel Scaloni to join him as an assistant. The adventure in Son Caliu ends as the Argentinian jumps at the chance, but once again his career takes another quick turn.

Jorge Sampaoli is appointed as Argentina’s coach and Lionel Scaloni follows him as a video analyst. But during the 2018 World Cup, relations between the hot-tempered coach and his group deteriorated. As the analyst, Lionel Scaloni was sometimes obliged to intervene to calm things down, since he is one of the only staff members to maintain close relations with the players.

After being eliminated in the round of 16 against France (4-3), Jorge Sampaoli was dismissed by the Argentine Football Federation. Lionel Scaloni then took the reins of the under-20 selection alongside Pablo Aimar. This new position would only be temporary since he was very quickly appointed interim first-team coach.

5. Unlike Jorge, Lionel’s age helped to calm down young players:

Because of his closeness to the players, his age (44) and his composure, he seems to have found the recipe for bringing calm to a team that has some strong characters.

“ We have a very good technical staff, who leave nothing to chance”, said Lionel Messi after the semi-final of the 2022 World Cup. “It’s a big help for us when we are on the pitch. There is no moment in the game where we are lost, we always know what we have to do, and how the matches are going to be.”

The youngest manager of the 2022 World Cup, whose contract was recently extended until 2026, Scaloni has earned the respect and admiration of fans, who have even nicknamed the national team “La Scalinata” after the coach helped them bring the trophy home to Argentina!

6. He said the match between Messi and Mbappe was beyond the two superstars:

“It’s a game between France and Argentina, it goes beyond Mbappé or even Messi because when we look at both teams, they contain a lot of weapons and other players can ALSO decide the outcome of the match, not only the superstars”, stated the coach.

“Even though Mbappé is a world-class player, and he will still improve, it will be much more than that. It’s Argentina versus France. We know the strengths of each team and we want to build on ours, like against the Netherlands. France can play in several different ways, in possession or in transition. It will be about much more than a question of possession”, continued Lionel.

And when asked if he can stop the great Mbappe, he said, once again that it’s beyond one man: It’s more a team effort than an individual issue. And that’s not just for Mbappé. Even though he is a good player, France has other players who supply him and make him even better. Clearly, the union of his group has been one of his biggest assets.

“The group is going through its best period, on the verge of a final. I want to point out that there are players who come and who have been part of this group and have also given their all. I don’t want to forget anyone” said Lionel Scaloni.

7. He was heavily criticized in the last World Cup Match:

Criticized on his arrival in 2018 for his lack of experience, in particular by Diego Maradona.

“Every action is amplified when you become the coach of Argentina..but I gave it my all and did my job,” he stated during a press conference.

Arriving in a heavy climate after the elimination of Argentina in the round of 16 of the 2018 World Cup, Lionel Scaloni has already won over Argentina since winning the Copa América in 2021.

Almost a year and a half later, the technician went down in his country’s footballing history winning against France on Sunday in the 2022 World Cup final.

After securing their third star, the first since 1986, the Argentinian national team was able to count on the massive support of their fans, both at home and in Qatar, there was no more criticism but just supreme love for Lionel Scaloni.

8. He makes sure the players believe his ideas:

The great merit of the coach and his assistants has been to carry out a necessary generational change and build a squad with a wide range of profiles, to then make use of all available resources in tactical and strategic terms, with optimal management of the emotions.

“That the player believes you is more important than the tactical system and strategy. It is important that the player goes out on the field convinced of what the coach tells him. It becomes easier when everyone rows in the same direction and has a clear idea”, he assessed in an interview this year.

7 Short-Term Investment Opportunities That Are Outside-the-Box