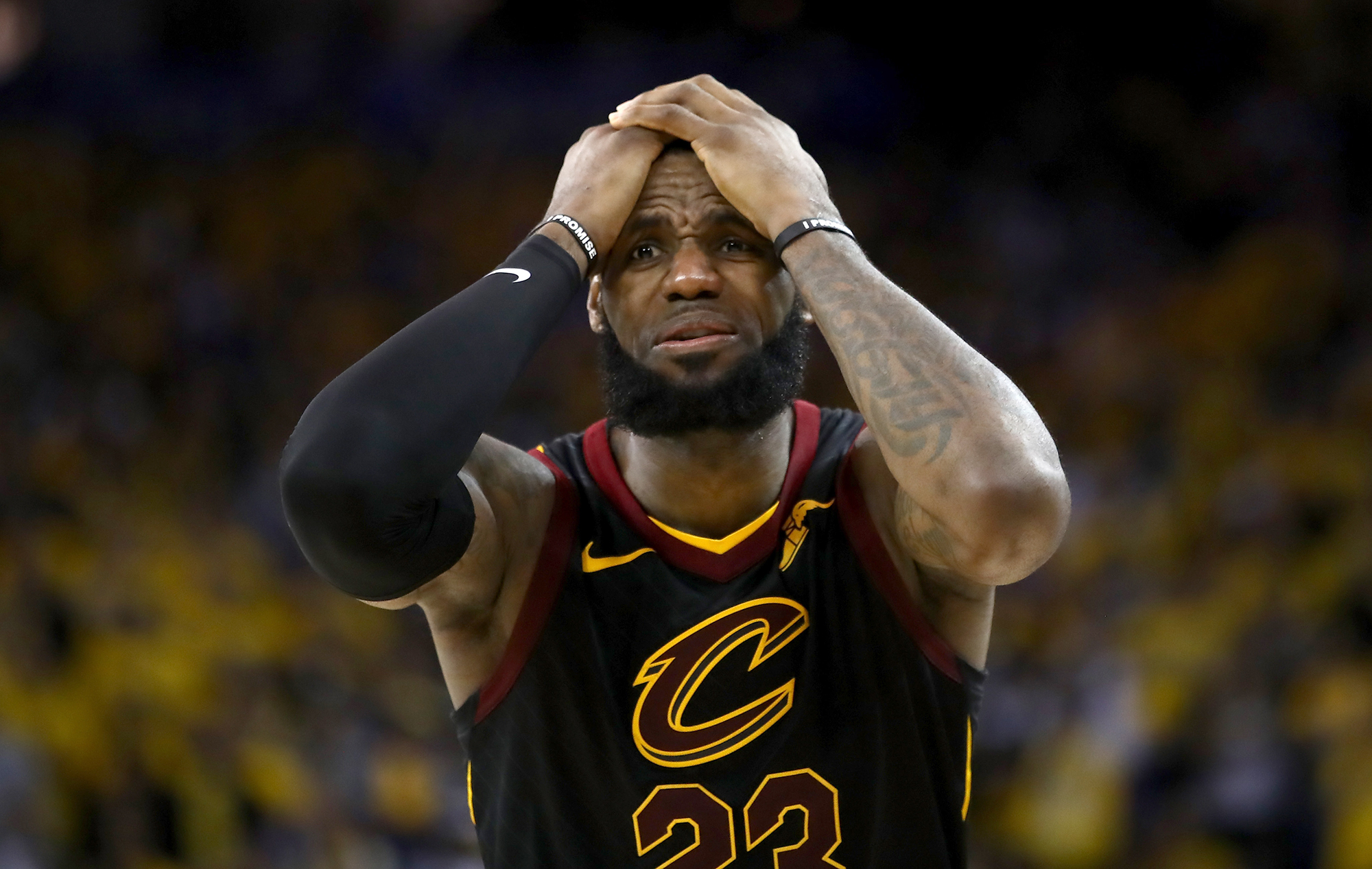 OAKLAND, CA - MAY 31: LeBron James #23 of the Cleveland Cavaliers reacts against the Golden State Warriors in Game 1 of the 2018 NBA Finals at ORACLE Arena on May 31, 2018 in Oakland, California. NOTE TO USER: User expressly acknowledges and agrees that, by downloading and or using this photograph, User is consenting to the terms and conditions of the Getty Images License Agreement. (Photo by Ezra Shaw/Getty Images)

With the biggest and brightest star of the NBA galaxy, LeBron James on their roster, it’s hard to imagine that the Los Angeles Lakers will miss out on a playoff spot. Granted, James has played the entirety of his career in the weaker Eastern Conference but it’s near impossible to think that a player who has made the NBA Finals for eight straight seasons is suddenly going to disappear from the playoffs altogether. It’s not even like his game has declined, he had the best playoff performance of his career last season. He played all 82 Games for the first time in his career, was widely considered to be the best player in the league, and took a team of himself, Kevin Love and some average/below average role players to the NBA Finals.
He spends over $2 million per year on fitness and nutrition, so his body is still going to hold up during the grind of the long NBA season. With playmakers Lonzo Ball and Rajon Rondo on his team, he will not have to concentrate extensively on having the ball with himself at all times and making plays for everyone else. With an ever-improving jump shot, LeBron James can become a serious off the ball threat. And when push comes to shove with the game on the line, he can take the reigns from Ball or Rondo and ensure that the team gets the victory.
However, some facts need to be acknowledged, LeBron James barely won 50 games in the weaker Eastern Conference last season with Kevin Love as his second best player. No player on the Lakers roster aside from James is better than Love so it makes sense to expect that he will win significantly fewer than 50 games. Still, missing the playoffs altogether sounds ridiculous for a LeBron James team and almost everyone except Kevin Pelton should be shocked if that happens.

Yes, the San Antonio Spurs have lost superstar forward and franchise cornerstone Kawhi Leonard (alongwith solid 3 and D guy, Danny Green) via trade to the Toronto Raptors. They also lost veteran point guard Tony Parker who chose to sign with the Charlotte Hornets via free agency. But, they also received perennial All Star DeMar DeRozan and Jakob Poeltl from the Raptors in return. Last season, the Spurs won 47 games and made the playoffs as the 7th seed with Kawhi Leonard only playing in 9 games and Tony Parker also missing a significant chunk of the season.
Parker’s loss isn’t as bad as it sounds, because of age and injuries, he would’ve been reduced to the role of the third string point guard behind DeJountey Murray and Patty Mills. As per Kawhi Leonard, he is definitely a better player than DeMar DeRozan but he missed most of the last season and having DeMar DeRozan instead of, well nobody, is a major upgrade. Availability is the best ability after all.
Aside from some catastrophic injuries, there is no chance that the San Antonio Spurs will win fewer games than last year. Infact, they can very well fight for a spot among the top 4 teams of the Western Conference.

3. Utah Jazz getting the second seed

The Utah Jazz have a very strong team, no doubt. They feature the reigning Defensive Player of the Year Rudy Gobert and budding superstar Donovan Mitchell who really had his coming out party against the Oklahoma City Thunder during the first round of the playoffs last season. The team has a solid pass-first point guard in Ricky Rubio and a sharpshooter in Joe Ingles. Solid role players such as Derrick Favors, Alec Burks and b alongwith the highly controversial rookie out of Duke University, Grayson Allen provide a lot of depth to the team.
However, this team is still up and coming, finding its feet. It’s difficult to compete in the tough-as-nails Western Conference without top tier superstars on the team. The Houston Rockets have James Harden and Chris Paul, the Oklahoma City Thunder have Russell Westbrook and Paul George, the Los Angeles Lakers have the best player in the league, LeBron James. As promising as Donovan Mitchell is, he has miles to go before he can reach the levels of the aforementioned superstars.
The Utah Jazz are a very good team, but the NBA is a league which has always been dominated by stars. They will definitely make the playoffs, but beating out the Houston Rockets, Oklahoma City Thunder, San Antonio Spurs and the Los Angeles Lakers to the second seed seems really unlikely. Keep in mind, this is the least unlikely of the three scenarios discussed here though.