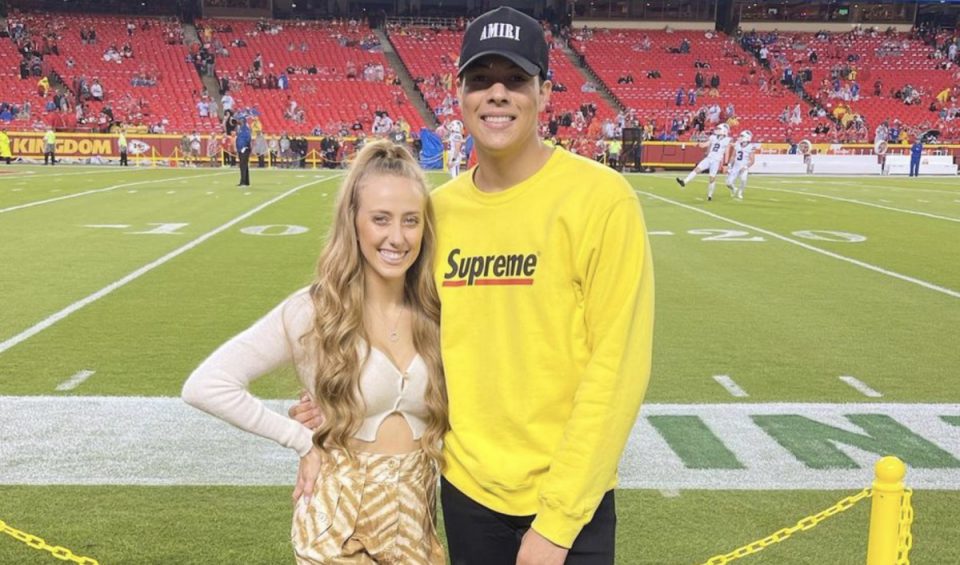 The brother of Patrick Mahomes, the controversial TikTok star is none other than Jackson Mahomes. If you’re wondering how Jackson rose to popularity, he became famous during the Chiefs’ 2020 Super Bowl run. While his brother was playing, Jackson would stand on the sidelines and post a number of Tik Tok dances before or after the game (often accompanied by Mahomes’ fiancée, Brittany Matthews). It wasn’t long before the young brother got his feet wet by entering into a world of controversies. Let’s explore!

Who Is Jackson Mahomes? 3 Controversial Things About The Brother Of The Football Star

Sometime late last year, Mahomes and some of his friends went to a restaurant called SoT which is in local Kansas City. The brother of the football star posted a lengthy tirade on social media about how terrible the service was.

He later deleted the post. But SoT’s response went viral when they expressed that they would “outlive their ego”.

Jackson Mahomes wrote “no bother” on Instagram just hours after SoT criticized the influencer in a Facebook post on Thursday. The Kansas City establishment accused Mahomes of trying to “crush” its business with a negative review on social media, after claiming Mahomes “attacked” an employee when SoT was unable to seat him and his group in the small space.

They later deleted their original reply as well. But before that SoT wrote a second Facebook post expressing regret at their initial post about the situation. “Social media can be used in many different ways, and yesterday our team used them to personally attack and question the character of someone we don’t know personally,” the bar association said in a statement on its official Facebook page.

“Of all the ways this situation could have been handled, we did it the wrong way.” The bar continued: “We want everyone to know that we recognize our shortcomings in this situation, and although we did not live up to our own expectations yesterday, and we are sure that many of our followers, with our social media presence, we promise to do better.” We did it the wrong way.”

2. ‘You know you missed us’ trolling:

In August of this year in 2022, Jackson Mahomes trolled fans from the Chief’s sideline in Arrowhead Stadium. While he initially playfully captioned one post on Snapchat with the trolling statement, in a matter of an hour, Jack shared another photo this time directed at his critics: “The trio you guys have missed.. :)”.

The zingy caption was a photo alongside a photo of himself with his sister-in-law, Brittany Matthews, and her 1-year-old daughter, Sterling.

This was a tricky sentence filled with online ridicule and controversy because both Jackson Mahomes and Brittany Matthews have been known to do very unkind acts towards opposing teams! For example, Brittany Matthews once purposely sprayed champagne on Chiefs fans at Arrowhead Stadium.

Last but hopefully the least, we address another tricky situation when the Tiktok star danced on Sean Taylor’s memorial logo!

Jackson Mahomes caught the attention of many people by making Tik Tok videos during the Super Bowl game of Kansas City Chiefs. Additionally, he made a video with his brother, Patrick Mahomes, after his brother’s team won!

But a great loss (the death of football players), cannot be used to make funny Tiktox.

“I want to sincerely apologize for accidentally being on the Sean Taylor #21 at FedEx Field. We were directed to stand in that area and I meant absolutely no disrespect to him or his family”, stated his apology message.

Some FAQs About Jackson Mahomes

Who is Jackson Mahomes?

American social media personality, Jackson Mahomes is famous for being the younger brother of Patrick Lavon Mahomes II, an American football quarterback. He is also famous as a TikToker, content creator, YouTuber, and basketball player.

He also gained great fame and success as his brother at a young age. He also made a video of him hitting 3-pointers from various parts of a medium-sized backyard basketball court.

Jackson achieved more fame and popularity when he took his connection with his brother online – specifically on Tik Tok, which he joined in the year 2018.

Jackson also has his own YouTube channel where he uploads videos about how TikTok helped him create his own identity.

What is Jackson Mahomes famous for?

Who are Jackson Mahomes’s parents?

Jackson Mahomes was born on May 15, 2000. He is from Texas, USA but in terms of ancestry Jackson comes from mixed ethnicity, i.e. black and white, as he is of African-American descent on his father’s side and has English, German, Scottish, and Dutch ancestry on his mother’s side.

About his parents, he was born to his father, Pat Mahomes, who is a former professional baseball pitcher who played with the Minnesota Twins, Boston Red Sox, New York Mets, Texas Rangers, Chicago Cubs and the Pittsburgh Pirates and his mother, Randi Martin.

Additionally, he has two siblings, an older brother, Patrick Lavon Mahomes II, who is a football quarterback for the Kansas City Chiefs of the National Football League (NFL), and a sister, Mia Bliss Mahomes.

Where did Jackson Mahomes study?

What is Jackson Mahomes’s net worth?

Jackson Mahomes is a TikTok star and social media personality who is making a huge amount of money from his career.

Jackson Mahomes’ net worth is estimated to be $800K according to some online sources. His main source of wealth is his career on social media (almost 250k followers on Instagram).

Also, he has a YouTube channel from where he is earning a good amount of money. Therefore, he does not require a salary. While his yearly earnings from his profession are yet to be revealed. He recently appeared in a State Farm commercial along with his brother, Patrick. Ads make sense because with his followers through various social media platforms, he likes to share his lifestyle and influence young buyers.

How tall is Jackson Mahomes?

Jackson Mahomes is a young handsome social media personality with a tall stature of 6 feet 4 inches and his height towers over his elder brother Patrick. His body type is slim compared to that of his brother’s bulky NFL stature.

4 Legal Facts About Payment Procedures All Businesses Should Know

Who Was The Butcher of Bilbao? Facts About The Barca-Athletic Feud!