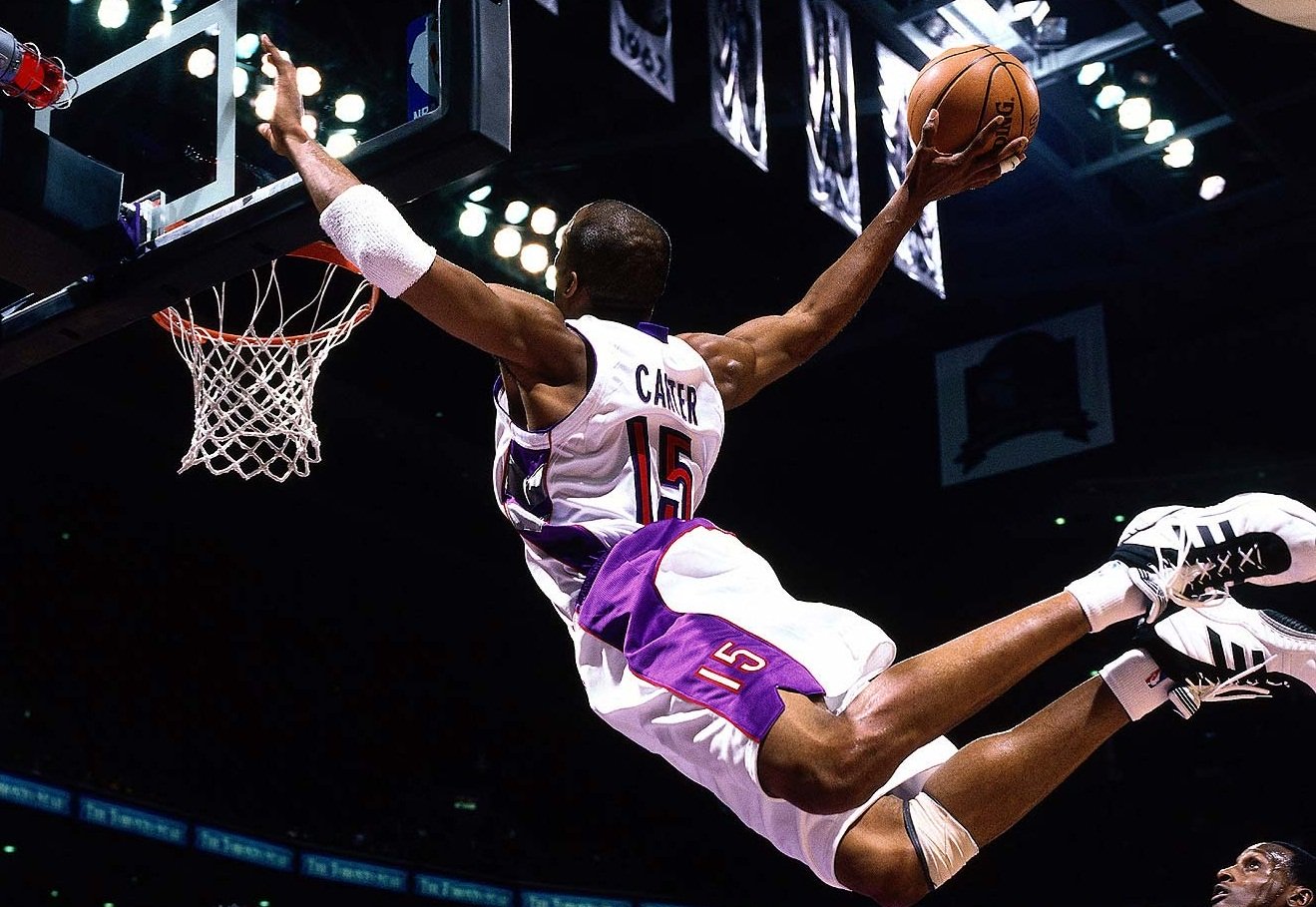 The world just turned a little more ‘Vinsane’. NBA veteran and the greatest dunker in league history, Vince Carter has signed a contract to play in his 21st season. As per ESPN‘s Adrian Wojnarowski, the Atlanta Hawks and Carter have agreed to a veteran minimum 1 year, $2.38 million deal. The 41 year old will be the oldest player in the league for the 2018 – 2019 season.
After playing with the Sacramento Kings during the last season (where his only major ‘high’-light was when he accidentally caused the Warriors’ Patrick McCaw to suffer a scary back injury), the Atlanta Hawks will be the eighth team of Carter’s career. The former Slam Dunk Contest Champion and eight time All Star is highly regarded for the six and a half seasons he spent with the Toronto Raptors. Leading the franchise into the playoffs and NBA relevance. He is widely regarded as the best player in the Raptors’ franchise history. Drafted 5th overall out of the University of North Carolina in the 1998 NBA draft, Carter dazzled the NBA with dunks that seemed to defy the law of physics. No NBA player had ever dunked with as much creativity and style as Vince Carter. You had to watch the Raptors play, because ‘Vinsanity’  might do another humanly impossible dunk during the game.
However, Vince Carter wasn’t just a high flying dunker. He had a fully loaded arsenal of offensive weapons. His airtime earned him the nickname ‘Air Canada’ and his stellar play during his first season earned him the Rookie of the Year award. In his second season, he averaged 25.7 points per game (fourth in the league) which earned him his first All Star berth and a spot on the All NBA Third Team. In the process, he also led the Raptors into the playoffs for the first time in franchise history. During the 2000 All Star Weekend, he put up what many consider to be the greatest performance in the Slam Dunk Contest history. His first dunk (a reverse 360 degrees windmill) prompted TNT broadcaster Kenny Smith to say the famous line: “Let’s go home..let’s go home ladies and gentlemen..let’s go home.”
His distant cousin Tracy McGrady was his teammate for sometime on the Raptors and they were considered a very formidable one-two punch in the NBA. However, McGrady was traded to the Orlando Magic in the year 2000 and Carter became the unquestioned superstar and leader of the team. In his third season, he averaged a career high 27.6 points per game and met Allen Iverson‘s Philadelphia 76ers in a legendary Eastern Conference Semi-finals matchup. Carter set the NBA playoffs record for most threes made in a game, on the way to scoring 50 points in Game 3. The series was closely fought and was set up for a nail biting finish in Game 7. The television ratings for Game 7 were one of the highest ever in NBC‘s history for a non Finals game. Unfortunately, with 2 seconds to go, Carter missed the game winning shot and the Raptors were eliminated. The series has become a classic now and Allen Iverson had this to say when asked about it in 2011: “It was incredible. Vince had great games at home and I had some great games at home, but both of us were just trying to put our teams on our back and win basketball games. It is great just having those memories and being a part of something like that.”
Sadly, the relationship between Carter and the Raptors deteriorated with time. Carter felt that the organisation wasn’t focused on building a winning team around him. Rumours of fights between Carter, head coach Sam Mitchell and point guard Rafer Alston began circling the NBA. The rumours were also fuelled by the fact that Mitchell frequently benched a visibly disgruntled Carter during the 4th quarters of important games. Angry at team president Richard Peddie and scared of losing their beloved superstar, some of the Raptors fans raised money to fly a ‘Keep Vince, Trade Peddie’ banner over the Air Canada Center before Carter’s annual charity game. However, it didn’t really help and on December 17th, 2004, Carter was traded to the New Jersey Nets for Alonzo Mourning, Aaron Williams, Eric Williams and two first round draft picks.
He had five successful seasons with the New Jersey Nets where he teamed up with superstar point guard Jason Kidd. The duo, alongwith Richard Jefferson led a shallow team to moderate playoff success. Since his stint with the Nets, he has played for the Orlando Magic, Phoenix Suns, Dallas Mavericks, Memphis Grizzlies and Sacramento Kings before signing with the Atlanta Hawks for the 2018-2019 season.
Here are some fun facts that demonstrate Carter’s longevity in the NBA:
1. He has had 228 teammates during the entire course of his career. Only Juwan Howard has had more teammates in his career.
2. Vince Carter was drafted into the NBA on June 24th, 1998. His newest teammate, rookie Trae Young, was BORN 3 months later on September 19th, 1998.
3. He is one of the three active NBA players, along with Dirk Nowitzki and Jason Terry, who have played in the NBA during the 1990s.
4. He has played with 1980 All American Herb Williams, and before his career ends, Carter will also play with 2018 All American Marvin Bagley.
5. Former NBA player Rex Chapman said that he used to play basketball with Vince Carter once, and Chapman hasn’t played basketball for 18 years.
6. At 21 years, Vince Carter’s NBA career is older than the actual age of some current NBA players.

33 Life Lessons Gives You the Flash Side Of Enlightenment.