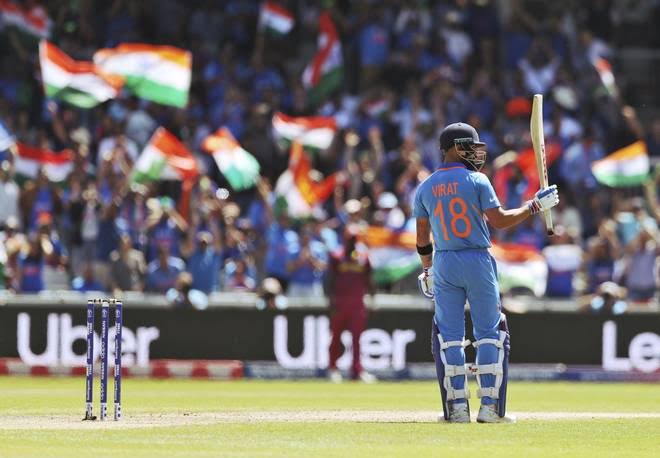 India continued its dominating run in the 2019 ICC Cricket World Cup and solidified its status as one of the tournament’s strong favourites. The 125 run hammering at Old Trafford, Manchester on Thursday eliminated West Indies from semi final contention.

India won the toss and decided to bat first on a pitch that was expected to be batsman friendly in the first innings at least. India were led by captain Virat Kohli’s fourth straight World Cup half-century as he scored 72 runs from 82 balls. K.L. Rahul narrowly missed out on a half century as he departed after scoring 48 runs from 64 balls. The Indian innings got a big boost by some big shots from Mahendra Singh Dhoni towards the end as his 56 runs from 61 balls helped India reach 268/7 in 50 overs.

The West Indies batting order had no answer for the Indian bowling attack as Mohammed Shami, Jasprit Bumrah and Yuzvendra Chahal wreaked havoc. Shami scalped four wickets while giving away only 16 runs in six overs. Bumrah took two wickets for just nine runs in six overs. Chahal also took two wickets for 39 runs in seven overs. For West Indies, Sunil Ambris was the top scorer with 31 runs as they were bundled out for 143 in 34.2 overs.

West Indies became the third team after Afghanistan and South Africa to crash out of the tournament. Australia officially qualified for the semi final while India and New Zealand are almost there.