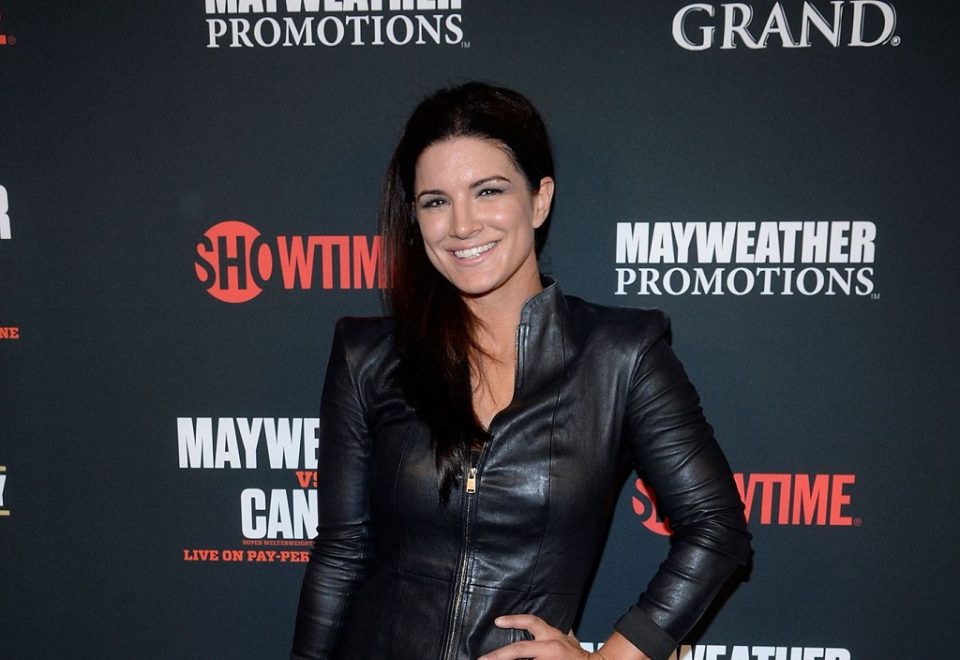 As far as former MMA stars who have successfully transitioned to the big screen, Gina Carano is probably the most gorgeous and the most successful. She had a successful MMA career where she knocked her opponents out with frenzy. Because of her movie star good looks and incredible physique, she transitioned naturally into action movies. She also posed nude for the ESPN Magazine’s “Body Issue” and that boosted her popularity quite a bit. While other MMA stars such as Ronda Rhousey have also transitioned from the octagon to the silver screen, they haven’t been as successful as Gina Carano. Perhaps her combination of looks, fighting skills and acting skills is hard to match. Gina Carano was also in the news for posting a risque image of hers on Instagram which was taken down soon. She was also criticised by the “woke” crowd for not subscribing to the “preferred pronouns” malarky and admirably stood her ground and refused to be bullied by the perpetually offended brigade. Gina Carano is a true fighter and really strong woman who never lets anything or anybody force her into doing something she doesn’t want to do. Let’s find out more about this incredible woman.

When was Gina Carano born?

Gina Carano was born on April 16th, 1982 in Dallas, Texas. Her father Glenn Carano played quarterback for the Dallas Cowboys and mother Dana Joy. After her parents divorced, Gina Carano was raised by her mother.

Where did Gina Carano study?

Gina Carano went to the Trinity Christian High School in Las vegas. She was a three sport star in school but she was at her best on the basketball court, leading the school to a state title. After graduating high school, she enrolled at the University of Nevada, Reno but transferred to the University of Nevada, Las Vegas after her freshman year. She majored in psychology.

How did Gina Carano get into MMA?

Gina Carano’s MMA journey started when she went with her ex boyfriend to his Muay Thai training centre and she was approached by the Muay Thai trainer who told her she needed to lose weight.

Eventually, Gina Carano proved to be a person who made a seamless transition from fighting to filming. As it turns out she’s quite a trailblazer in women’s MMA, as well as being a versatile actor and athlete.

While Roger Staubach and Danny White were the main signal callers for Tom Landry during the 1970s and 1980s, Glenn Carano was holding the clipboard as the third-string quarterback. A star QB at UNLV, Carano was a second-round pick by the Cowboys in 1977. Eight months later, Carano would share in the team’s glory as they beat the Denver Broncos to win Super Bowl XII.

Despite appearing in 36 games in a seven-year career, Carano mainly saw spot duty. He started just one game in his career: A 37-13 win over the Baltimore Colts in 1981.

The highlight of his career was when he came on for an injured Danny White against the Chicago Bears on Thanksgiving. He led Dallas to a 10-9 comeback win that day.

Gina Carano was a three-sport athlete at Trinity Christian High School in Las Vegas, Nevada. But while she enjoyed playing volleyball and softball, she found the greatest success on the basketball court.

She credits her grandfather Jack Cason, the team’s coach, with giving the team a great work ethic. And it definitely paid off. As a senior in 2000, Carano and the Thunder won the Nevada state championship.

Carano decided not to pursue basketball much farther though. After college, she took up Muay Thai kickboxing and soon went professional, going 12-1-1 in the sport.

When did Gina Carano fight in her first ever sanctioned MMA bout?

It didn’t take long for Carano to transition from professional Muay Thai to MMA. In 2006, she received an offer to compete in the prestigious World Extreme Fighting promotion in the first sanctioned bout between two women in the state of Nevada.

Facing off against Leiticia Pestovа, Carano won her fight by TKO in just 38 seconds.

From there, Carano’s MMA career took off to greater heights.

Who inflicted the only loss of Gina Carano’s career?

Between 2006 and 2008, Carano went 7-0 with three knockouts, one submission and three unanimous decision wins. Two of those wins came in the first three minutes of her fights. Perhaps the biggest win of her career was a first-round tapout of future UFC title contender Tonya Evinger in 2007.

As a member of the Strikeforce MMA promotion, Carano was at the top of the list of future title contenders. But when the promotion announced the formation of the Strikeforce Women’s Featherweight Championship, Carano was pitted against the force of nature that was Cris Cyborg for the belt. Gina Carano was an underdog in the fight as Cyborg was considered a force of nature. But Gina Carano didn’t just go into the octagon and lay an egg. She fought valiantly till the fight was stopped because of TKO at 4:59. By way of comparison, that’s way more than what half of Cyborg’s opponents have lasted in her MMA career.

With Hulk Hogan and Laila Ali hosting a remake of the hit athletic competition in 2008, the show needed some professional athletes to serve as “gladiators.”

Enter Gina Carano, still in the prime of her MMA career and just starting to get into the realm of acting. Dubbed “Crush” on the show, Carano appeared in 16 of the show’s 21 episodes.

Though the show had a short run, it was one of Carano’s first big breaks in TV. Her movie career would begin soon after.

Which was Gina Carano’s first major role in a feature film?

Gina Carano made her film debut in the 2009 direct to video movie, Blood and Bone. However, her first major role and the real acting break came with the 2011 movie Haywire.

Haywire, an action thriller directed by Steven Soderbergh, was Carano’s breakout film role. Carano was the lead and worked alongside such Hollywood stars as Ewan McGregor, Michael Douglas, Channing Tatum, Antonio Banderas and Bill Paxton in a film about a black ops operative betrayed by her employers and targeted by a conspiracy.

For the role, Carano underwent six weeks of tactical training with an ex-IDF officer. She would spend three hours a day on stunts, and another three hours a day in training. That training would go on to help her in future roles. While the film didn’t become a box office success, it did make Gina Carano stand out as the next big female action star to watch out for.

Did Gina Carano appear in the Fast and Furious franchise?

Gina Carano became a truly global star after appearing in the Fast and Furious movie franchise for the 2013 movie Fast and Furious 6. She played the role of Riley Hicks and her fight scene with franchise regular Michelle Rodriguez became one of the highlights of the movie.

Working alongside big Hollywood names such as The Rock, Vin Diesel, Michelle Rodriguez, Jason Statham and Gal Gadot really made her a global star.

Over the next three years, Carano would appear in a few more direct-to-video films and an episode of Almost Human.

Did Gina Carano appear in Deadpool?

Gina Carano appeared in another blockbuster film, Tim Miller’s Deadpool. In the 2016 super hit (which is the one of the highest grossing R Rated movies of all time), Gina Carano played the role of the villainous mutant Angel Dust.Throughout the film, she was constantly mocked by Ryan Reynolds’ Deadpool but perhaps her most iconic scene from the movie was the hilarious fight scene with Colossus.

What role does Gina Carano play in The Mandalorian?

Gina Carano appears in the hit Disney+ series set in the Star Wars Universe, The Mandalorian. After nearly a decade in various starring and supporting roles, she emerged in 2019 as one of breakout stars of the Disney+ hit series. Carano’s character in the show, Cara Dune, is a former Rebel Alliance shock trooper turned mercenary. She made her debut in Episode 4 and quickly became a fan favorite. She is set to return to the show in the highly-anticipated season two. According to series creator and showrunner Jon Favreau, she was always the only actress he wanted for that role. In a funny twist, when Gina Carano first received the audition call, she thought she would play the role of a female wookiee and she was ready to put on furs. But she was eventually surprised when she found out that she was going to be one of the few characters in The Mandalorian whose face will always be visible.

Who is Gina Carano’s husband?

Currently, Gina Carano is not married but she has been dating Kevin Ross since 2015. Prior to that she dated famous British actor Henry Cavill, who plays the role of Superman in the DC Extended Universe (DCEU).

How tall is Gina Carano?

What is Gina Carano’s net worth?

The popular actress and former MMA superstar Gina Carano’s net worth is estimated to be around $8 million as of 2020.

The New Sherlock Holmes 50p Coin: How Much is It Worth and How Can You Get It?