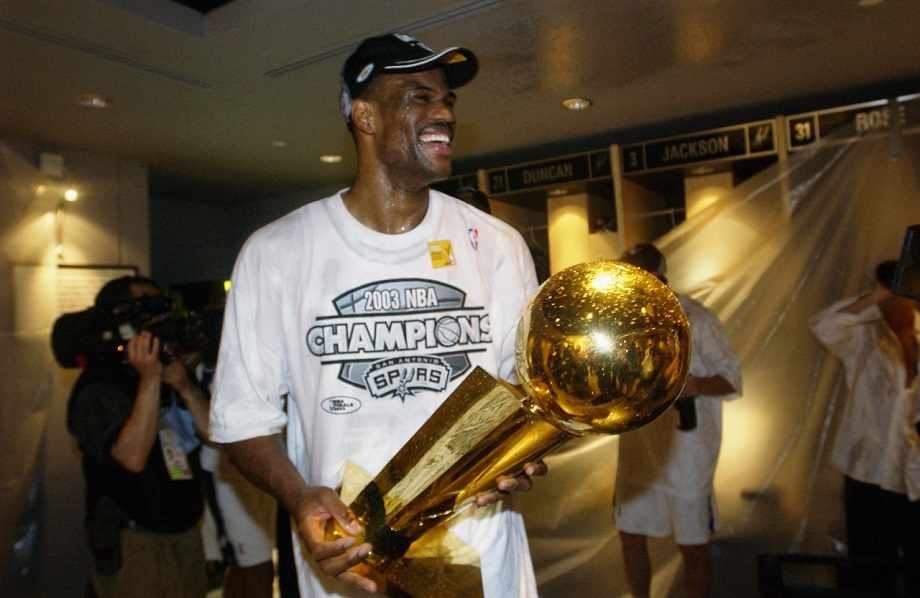 SAN ANTONIO, TX - JUNE 15: David Robinson #50 of the San Antonio Spurs holds the Championship trophy after defeating the New Jersey Nets in game six of the 2003 NBA Finals on June 15, 2003 at the SBC Center in San Antonio, Texas. The Spurs won 88-77 and defeated the Nets to win the NBA Championship. NOTE TO USER: User expressly acknowledges and agrees that, by downloading and/or using this Photograph, User is consenting to the terms and conditions of the Getty Images License Agreement. (Photo by Ezra Shaw/Getty Images)

Knowing when to hang up the boots and bowing out of a sport is one of the toughest things to do for an athlete. Especially when the athlete has been chasing the elusive ‘ultimate prize’ in their sport (Super Bowl, NBA Championship, FIFA World Cup etc.). In a desperate attempt to win a championship, some athletes try to stretch their career out longer than they should while there are some athletes who manage to take a gracious bow from their sport, at the top of their game, with a championship to culminate a glorious career. Today we will take a look at three athletes who went out on top, and when they retired, people asked “Why is he retiring?” instead of “Why isn’t he retiring?”.

The stars had aligned perfectly for the Bus in his final NFL season. The Pittsburgh Steelers and Bettis took advantage of the Indianapolis Colts having an inexplicably poor performance during the Colts’ home divisional playoff game, the Super Bowl being played in Bettis’ hometown of Detroit and a trick play which sealed the deal. What’s even more fitting that the 5’11, 255 lbs Bettis, who would be considered ‘extra large’ for a running back, retired after winning Super Bowl XL. After rushing for over 13000 yards and scoring 91 touchdowns, Bettis climbed to the top of the world by winning a Super Bowl and put a stamp on an amazing career. On the podium in Detroit, Bettis announced his retirement: “I played this game for a championship, I am a champion, and I think the Bus’ last stop is here in Detroit.” Bettis was enshrined in the Pro Football Hall of Fame in 2015.

What most people forget about Strahan’s last year is that prior to that season, he wasn’t really interested in playing anymore. Tiki Barber had already retired and the abilities of quarterback Eli Manning were heavily questioned. Strahan skipped training camp and only joined the team for Week 1 of the season. He then led a devastating pass rush which destroyed opposing quarterbacks. Still, the season was looking rough and the locker room was (allegedly) divided. The fifteen year veteran then approached coach Tom Coughlin and urged him to change his approach towards the team. The New York Giants eventually got their season together, culminating in one of the greatest upsets in sports history where they defeated the 18-0 New England Patriots in Super Bowl XLII. Strahan retired with 141.5 career sacks and was enshrined into the Pro Football Hall of Fame in 2015. He is also an accomplished talk show host on American television.

Prior to his final season, there wasn’t much that the ‘Admiral’ David Robinson hadn’t accomplished in his career. A graduate of the Naval Academy who got out of service because he was too tall, had already won an NBA Championship and was a member of the original ‘Dream Team’ which dominated basketball at the 1992 Barcelona Olympics (the Dream Team was the first ever USA Basketball team which was mainly comprised of NBA players as they weren’t allowed to compete in the Olympics before that. It has been considered a major force in globalizing basketball).
In the 2002-2003 season, it was becoming clear that Robinson’s abilities had declined greatly with his age. His minutes and points per game had declined to their lowest ever. Thankfully, he had another Hall of Famer with him in the front court, Tim Duncan. Together, the Twin Towers and the San Antonio Spurs went on to defeat the New Jersey Nets in six games during the 2003 NBA Finals. This victory wasn’t just the team and Robinson’s second NBA Championship, it was also a great send off into the sunset for the Admiral as he announced his retirement from basketball after the chamionship. During his career, the 7 foot 1 inch tall Robinson, won a Most Valuable Player award, won two NBA Championships, won an olympic gold medal, made the All Star team 10 times, scored 71 points in a game and by all standards, was as humble and gracious as a naval academy graduate and millitary raised person can be expected to be. He was enshrined in the Naismith Memorial Basketball Hall of Fame in an illustrious class with Michael Jordan, John Stockton and Jerry Sloan.