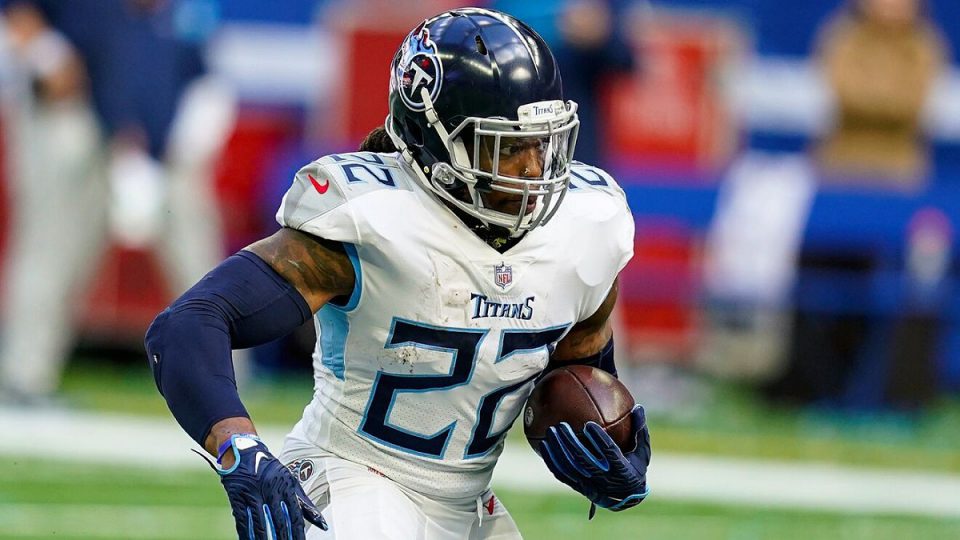 As far as NFL running backs go, Derrick Henry of the Tennessee Titans is one of the most formidable forces in the NFL. His incredible combination of size, strength, and speed makes him an almost unstoppable force. As former Patriots wide receiver Julian Edelman said, “he falls five yards”. Whenever Henry is not injured, he is just a treat to watch, making other players look like kids as he overpowers them and tosses them around like ragdolls. In this post, we will find out more about him. Let’s get started.

Who is Derrick Henry?

Derrick Henry is something of an expensive sports car for the Titans: parked in the garage for a long time, until you can’t keep your hands off him and suddenly you don’t want to get out. In any case, the sporting upswing at the end of the main round was largely due to him.

After 12,000 yards in high school, he was the highest-scoring college recruit of his year and then impressed at the Alabama Crimson Tide, where he won the coveted Heisman Trophy for College Player of the Year (2015) and captured the National Championship twice for Nick Saban’s formidable Crimson tide.

Still, he was drafted as the second running back (in the second round) by the Titans in 2016 behind Ezekiel Elliott (drafted by the Dallas Cowboys) and played second fiddle to DeMarco Murray. The Patriots brought in an experienced man in Dion Lewis this season, but since the Titans used Henry as a feature back, he has rewarded them with outstanding performances.

Despite Marcus Mariota struggling with injuries and having to fill in part for backup Blaine Gabbert, Henry was doing great towards the end of the season: 585 rush yards and seven touchdowns in the last four games.

Due to the 17-33 home loss against the Colts in week 17, the Titans failed to make the playoffs. However, with Derrick Henry as a workhorse in the backfield, they were very well positioned for the future. If Marcus Mariota could then remain injury-free and the receiver position can be raised to the upper NFL level, the prospects for the Titans were not so bad.

How valuable is Derrick Henry?

Tennessee Titans running back Derrick Henry has shown after the victory over the Texans this week 6 that his team can trust him at all times, from the simplest to the tightest situations and that makes him the most valuable of their position in the league.

When in July of this year the Titans reached an agreement with their broker to sign a new contract worth a total of 50 million with 25 of them guaranteed, the criticism was immediate. After all, the NFL today is a league that is increasingly resistant to awarding an expensive second contract to running backs.

This tendency has been reinforced thanks to emerging players who, taken in the Draft in the intermediate, late rounds or even without being selected, give very good results. The formula seems to be to have a young player selected in the Draft that fits the offensive system, and use him until he runs out in the third or fourth year of his cheap rookie contract. Then, teams can choose a new running back from the draft and another team can pay the existing running back big money.

Exceptions are always worth mentioning and Derrick Henry is one of them. His talent has been on display on multiple occasions, most recently when he had 212 yards on 22 carries and two touchdowns plus 52 yards on two receptions. These numbers put him in elite company, trailing only Earl Campbell and LaDanian Tomlinson with three games of 200+ rushing yards in the first five years of his career: yet he is the first player in history to record at least one 200-yard game in three straight seasons.

Henry’s career-high 264 total yards were more than a third of his team’s total production of 601 yards, which set a franchise all-time high.

All this production has caused the Titans to have tremendous confidence in him, to the point of putting the ball in his hands regardless of the circumstance of the game, the down, or the distance to go to the endzone.

Again taking Sunday’s game as an example, when in the fourth quarter the Texans turned the scoreboard for the first time, the Titans handed the ball to Henry at their own 6-yard line, only to see him slip away 94 yards to the end zone. At a time when the team needed a commanding drive to regain the lead late in the game, Offensive Coordinator Arthur Smith trusted his running back from the first play and the result was incredible.

As the ultimate proof of confidence and that in the eyes of his coaches he is the most valuable element of his offense (and probably of the team) when the game was already in overtime, two plays by Henry were the key; first, they looked for him on a pass in which he got 53 yards and finally, on third down and a goal from the 5-yard line, the Titans decided to take the ball out of the hands of their quarterback Ryan Tannehill and give a direct center to his running back, who did not disappointed and got the winning score.

We can mention the value of players like Alvin Kamara for the Saints, Saquon Barkley for the Giants or Josh Jacobs for the Raiders, but none seem as big and decisive as Derrick Henry for the Titans.

How is Derrick Henry different from other running backs?

Running Backs are the poor cousin of today’s NFL offensive skill positions. Many teams hesitate to invest permanently in these players who take hits and are easily interchangeable as they depend on the patterns of play and the chemistry of a franchise.

One player, however, stands out clearly. That player is Derrick Henry. Indeed, the Titans player can legitimately claim a special status, a player who has had multiple 2000 rushing yard seasons.

An outstanding athlete, his unique combination of power and speed makes him an essential puncher for the Nashville team, which has been an attack with multiple possibilities throughout the season, especially on the ground thanks to the No. 22.

With a height of 1.91m and a weight of 112 kilos, Henry did not strictly speak of “normal” measurements. He has the body of an outside linebacker template whose mission would be to rush the quarterback… even though he works best as a running back.

This position sees various physical profiles rub shoulders but it must be realized that small and cubic templates are favored to make “cuts” and find the light of the breaches created by the offensive line.

Henry is a real colossus, a puncher, feared and to say the least effective. His weight in the average of second-curtain defensive players, and his speed, are a problem for all NFL defenses that intend to contain the opposing running game. He is so big, heavy and powerful that he becomes almost unstoppable if special defensive schemes are not created to stop him.

Henry ran the 40 yards in 4.54 seconds, but it is above all his explosiveness, comparable to smaller and lighter runners, which stands out. Its passage time of 1.60 seconds to 10 yards attests to excellent acceleration. Other interesting power indicators, his jumps of 94 centimeters in the dry trigger, and 3.30 meters in horizontal attest to an insane explosive force of the chain of the lower extensors (mainly legs and glutes).

He also set a very interesting time of 7.20 seconds in the 3-cone workshop, showing good agility for someone with a high centre of gravity like him.

Ultimately, Derrick Henry is a colossus who, not content with being physically gifted, possesses the prerogative of exceptional athletes in terms of power, explosiveness, and speed.

Derrick Henry is a total tank

Combine the explosion that is his with insane strength – his 22 repetitions of bench press at 102 kilos suggests a maximum between 180 and 200 kilos, and you have a ball carrier who frightens ordinary mortals and has taken for a habit of punching through many NFL defenses.

Large in size, he has the particularity of having a center of gravity located 1.14 m from the ground, which inevitably makes his changes of direction less abrupt and striking. On the other hand, for defenders accustomed to tackling low so as to bring down to stop play, Henry presents a completely different challenge.

His high levers involve targeting differently on tackles. Henry is very strong on the yards after contact because he has developed an ability to have high knees in his runs, which allows him to stay upright in the event of low tackles. Big, tall and stable on his feet, strong as a buffalo. A total beast.

To finish convincing you, he managed during a test of the program Sports science (ESPN) to perforate 6 punching bags used in boxing representing a total weight of 680 kilos (more than any defensive lineman of the league) in 1 second 397. While ordinary mortals might not even be able to extricate themselves from such a tangle of heavy and bulky weights, he gets rid of them in less than a second and a half.

Irrespective of how undervalued running backs are, or how short their shelf life is, it is still important to recognize the qualities of Derrick Henry. Of course, they are not limited to only physical and athletic data, but when we become aware of his possibilities, and we look at his productions for 2 seasons, we must admit that #22 of the Titans is an outstanding player who is one of the stars of the league