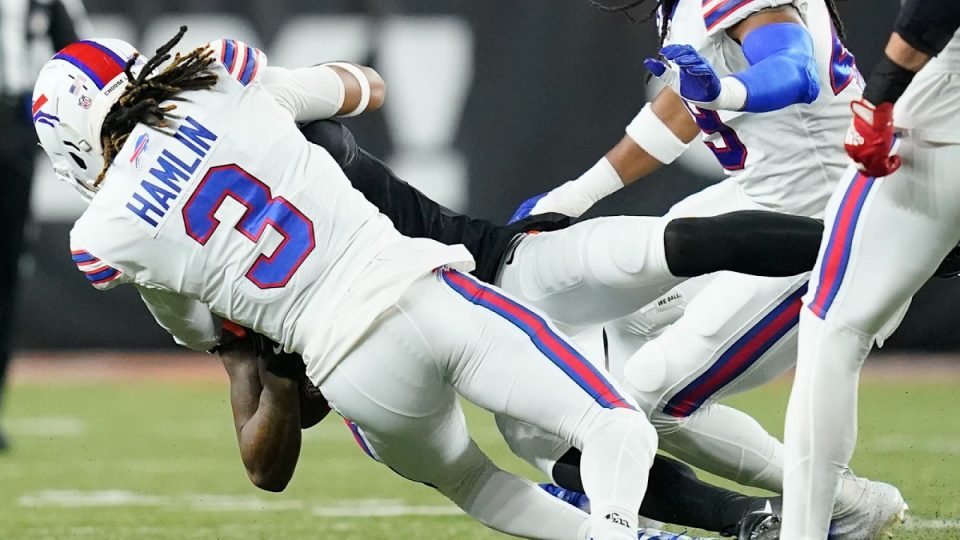 What Happened To Damar Hamlin? After A Week The Next Stage of Recovery Begins

On Jan 3rd, Damar Hamlin was in critical condition after suffering cardiac arrest and collapsing on a full court. He was captured lying on the Cincinnati Bengals’ field of play making the world of American sports stunned by the complex state of his health.

The event occurred on Monday, when the 24-year-old athlete knocked down Tee Higgins, receiving a hard blow from his rival with his shoulder on his chest. In the shocking images, you can see how Hamlin collapses and falls to the playing field. The match was quickly stopped and CPR (cardiopulmonary resuscitation) was applied to the player, who was then rushed by ambulance to the University of Cincinnati Medical Center hospital. According to the Buffalo Bills social media update Damar Hamlin was transported to the UC Medical Center for further testing after being sedated and in critical condition.

An uncle of Damar Hamlin said that the athlete is still in critical condition: but the main goal is to recover to breathe on his own and heal his lungs.”

According to the first reports, the 24-year-old athlete fell unconscious to the grass as a result of rapid cardiopulmonary resuscitation he was transferred to the hospital. Although he is still in critical condition, the outlook seems to be a little more encouraging. This was confirmed by the journalist Josh Reed via Twitter, after chatting with a close relative of the athlete.

“I just spoke with Damar Hamlin’s (Dorrian Glenn) uncle. Damar was originally on 100 percent oxygen and is now at 50 percent, ”exposed the communicator.

Good news spread as Damar Hamlin woke up and asked the doctors a particular question after being in an induced coma after collapsing in a game.

The Buffalo Bills player asked about the outcome of the match despite collapsing and almost dying in the middle of that very game!

According to his doctors, the athlete is neurologically healthy and has been able to move his hands and feet. But he has also been able to communicate with the doctors of the General Surgery division at UC Health, who revealed the first question Hamlin asked after waking up.

According to Dr. Timothy Pritts, the first question, which he asked through a paper note, was “Did we win?”, to which he answered: “Yes, Damar, you won. You won the game of life”, assured the professionals at a press conference.

The Bills’ safety asking such a meaningful question indicates that the player did not lose his memory and that he maintains his consciousness, however, he was still intubated at this time so his communication was through writing.

The doctors highlighted what was done after the 24-year-old suffered cardiac arrest: “It was a truly exceptional job by everyone and not only saved his life, but also his neurological function.

The reason we are talking about his recovery is the critical importance of immediate, good, high-quality CPR and immediate access to defibrillation.”

“There are many, many steps still to come. From our point of view, we would like to see him continue to improve, fully breathe on his own and be ready to be released from the hospital,” Pritts said at the conference.

Hamlin was transferred Monday from a Cincinnati hospital to a Buffalo one after doctors determined his critical condition had improved to good or fair, a marker of recovery that exceeded expectations. “We felt it was safe and appropriate to help him return to the greater Buffalo area,” said the chief of surgery Dr. Timothy Pritts.

The player’s condition improved on Monday because his organ systems were stable and he no longer required intensive care or respiratory therapy, doctors said. “He is walking normally. It is admittedly a bit weak. I don’t think it’s really a surprise after what he’s been through, just getting his strength back, and that’s part of his recovery process,’ said Dr William Knight, a neurovascular ICU doctor with a history of treating Hamlin at UC Health.

“We will all have grown as people and as men in this case,” Head Coach McDermott said, noting there is a plan in place for players and staff to visit Hamlin “at the right time”. “Having him around will give us more comfort” and inspire the team as they prepare for the playoffs”.

Although Hamlin wasn’t with the team when they played the New England Patriots on Sunday, his support was definitely felt. When his team scored a touchdown, Hamlin set off alarms in the ICU, Pritts said.

Where is Damar Hamlin now?

Damar Hamlin is currently in a Buffalo hospital as of January 10th.

What helped save his life was the immediate medical response to Hamlin’s collapse and the Buffalo Bills are now encouraging people on how to properly administer CPR.

Part of an emergency action plan was this medical response which “involves the team, independent medical and athletic training staff, equipment and security personnel, and is reviewed before each game”, a Monday statement of the NFL team the Buffalo Bills read.

Within the Buffalo team, we know that they are committed to supporting resources including CPR certifications, automated external defibrillation units, and guidance for developing cardiac emergency response plans.

“We encourage all of our fans to continue to show your support and take the next step by becoming CPR certified,” the Bills said.

Who is Damar Hamlin?

At 24, Damar Hamlin played at the safety position and came to the NFL in 2021 (211th overall pick). With a height of 1.83 and 90 kilos, his speed is one of the high points of the Buffalo Bills’ defense. In his career he accumulated 29 games, having appeared in all 17 this season.

He had outstanding productions against the New York Jets, Green Bay Packers, and Minnesota Vikings, where he possessed at least 10 tackles. Against the Cincinnati Bengals, he was hit in his first action: the tackle against Tee Higgins was his only action in the game.

He also graduated from Pittsburgh, where he registered a total of 275 tackles in five seasons and received a message of support from the institution.

Away from the football field, Hamlin raised a collection through the GoFundMe platform to raise funds to buy toys for children. His charity’s goal was to buy and donate toys to a daycare center in his hometown of McKees Rock, Pennsylvania. His goal was to reach $2,500.

In the hours after Hamlin’s collapse, donations to the toy drive organized by Hamlin and the Chasing M’s Foundation skyrocketed to over $3 million in a few hours.

According to Hamlin’s GoFundMe page, the toy drive seeks to “make a positive impact on children hardest hit by the pandemic,” stating that 100% of the funds will go towards toys for children in need.

Can Cristiano Ronaldo Actually Save The Saudi League? (Al-Nassr Ranking)

Carmen Electra: The Scintillating Sex Symbol Of The 90s