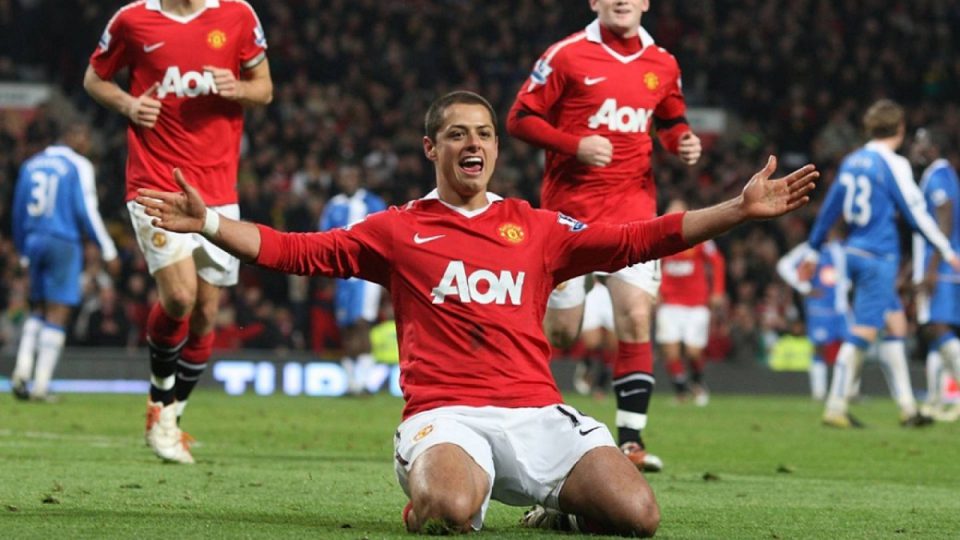 There is no doubt that the ‘Red Devils’ are going through a serious crisis of results and have even been absent from the UEFA Champions League action. However, in this post, we are not going to talk about the current miserable state of the club. We will be talking about the Mexican phenomenon that set Old Trafford on fire during his stint there. Of course, we are talking about Chicharito, the man with the awesome nickname who is also the third highest goalscorer for Manchester United in this decade. Let’s get started:

How prolific was Chicharito with Manchester United?

The Mexican striker Javier “Chicharito” Hernandez arrived at the Manchester club in 2010.

It is impossible to forget when the player established himself as one of the great promises of national football by obtaining the scoring title of the 2010 Bicentennial tournament with Chivas, an achievement that prompted him to sign for the Old Trafford outfit.

Throughout his 4-year stay at Manchester United, ‘Chicharito’ managed to score 59 goals and dished out 20 assists in 157 games. These figures earned him the biggest leap of his entire career, going on loan to Real Madrid, the most successful and storied club in football history.

As if that were not enough, he was placed as the third leading scorer for the ‘Red Devils’ throughout the decade.

His scoring total was only below the 145 of the historic Wayne Rooney and the 61 recently reached on December 28 by Marcus Rashford, who has 16 so far this season.

In addition, Chicharito had the luxury of leaving players like Robin Van Persie and Anthony Martial behind with 58 goals; Juan Mata with 45, Romelu Lukaku with 42, Dimitar Berbatov with 36, Paul Pogba with 31 and Jesse Lingard with 30.

He scored a brace on nine different occasions for Manchester United as well.

Unfortunately, Chicharito could not maintain his level to remain in an elite team like Manchester United, so he had to try his luck with Bayer Leverkusen, at West Ham United and went back to Spain to play for Sevilla, where he scored 4 goals in 16 games.

What is Chicharito’s legacy for Manchester United?

Chicharito Hernandez left an indelible mark on Europe and was included in the list of the best scorers in the Premier League, where he became a benchmark for Manchester United.

The Mexican striker also went through West Ham United on his adventure in Europe, a club in which he also managed to score several goals, although he did not exceed 20.

What did Chicharito say upon Wayne Rooney’s retirement?

One of the greatest idols of Manchester United decided to put an end to his career as a professional player to enroll in his role as coach. For this, “Chicharito” sent an emotional message to Wayne Rooney.

The ‘Spoiled Child’ lasted 16 years as a professional.

Chicharito Hernández and Rooney met in the English team, when the Mexican signed in 2010, since then he forged a close friendship with the European footballer, which he continued despite no longer being in the same club.

Through his official Instagram account, “Chicharito” sent a message to Wayne Rooney thanking him for everything he taught him while they shared a dressing room in England.

“You are a great inspiration and a true football legend. Thank you for everything you did for me and for my career, all the best in your new role.

Wayne Rooney decided to put an end to his professional career to dedicate himself fully to his new role as Technical Director of the English team Derby County.

In its official presentation, the team of the former English player, who participates in the Second Division of English football, fell 1-0 at home against Rotherham.

What happened to Chicharito after Manchester United?

Chicharito Hernández has played for 5 European teams since he left Mexico in 2010, one of them was Bayer Leverkusen from Germany and thanks to that he appeared in the ideal Latin eleven of the Bundesliga of the decade.

The striker was in German football for 2 years. In that period, ‘Chicharito’ managed to score 39 goals and dish out 9 assists in 76 games. Of these goals, 28 were achieved in the domestic league, while the rest were in the UEFA Champions League and German Cup.

The Bundesliga published a list featuring eleven of the best Latin players of the decade.

In goal, retired Colombian Faryd Mondragón was chosen, who played for Colonia between 2007 and 2010. In defense, the lucky ones were Argentine Javier Pinola, a former Nurnberg player; and the Brazilian Naldo, a former soccer player for Werder Bremen, Wolfsburg and Schalke 04, where Rafinha also played, in addition to Bayern Munich.

The midfield was the area with the highest caliber weapons: Colombians James Rodríguez and Juan Pablo Arango due to their time at Bayern Munich and Borussia Monchengladbach respectively; and the Chileans Arturo Vidal and Charles Aranguiz after serving with the ‘Bavaros’ and Bayer Leverkusen respectively.

Chicharito was the only Mexican on the list. The current MLS star attacker shared the honour with the Peruvian Claudio Pizarro, current Werder Bremen footballer who has also played for Bayern Munich and Cologne; as well as with the retired Spaniard Raúl Gonzalez Blanco, who spent 2 seasons with Schalke 04 after an end to his storied career with Real Madrid.

It should be remembered that the rest of the Mexicans who had the opportunity to play in Germany during the decade were: Ricardo Osorio, Francisco ‘Maza’ Rodríguez, Andrés Guardado, Marco Fabián and Carlos Salcedo, although none of them received the honour to accompany Chicharito Hernandez the Bundesliga lineup.

Zeru vs Buzzoid: Which One Is the Best for Buying Instagram Followers?