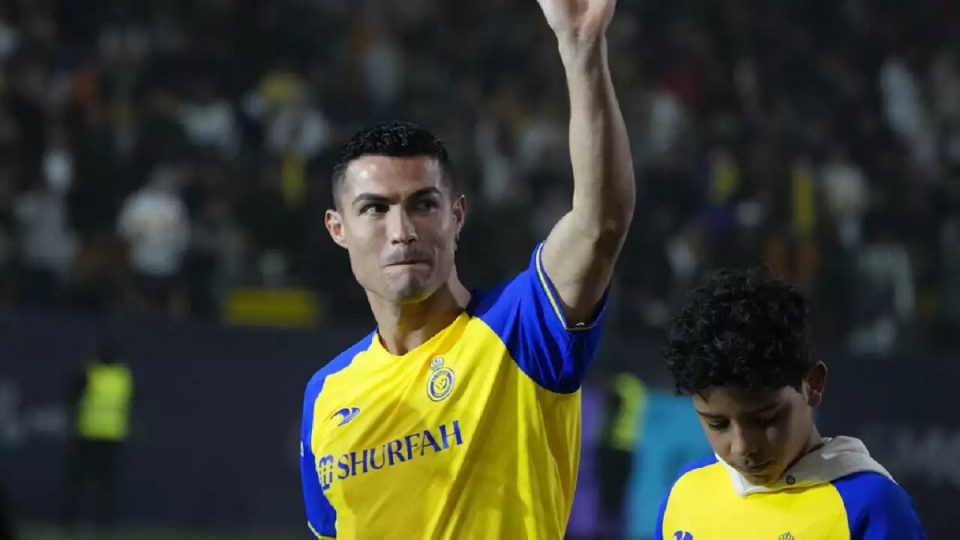 After news broke that he has signed a stunning deal with Al-Nassr, fans have taken to social media to slam Cristiano Ronaldo’s decision claiming the striker’s career is now almost over. On the other hand, can the Al-Nassr football team be saved by the one and only Cristiano Ronaldo? The star was seen on social media celebrating Al-Nassr’s recent goal against Al-Ta’ee from his gym!

CR7’s Contract With Al Nassr: Facts About The Saudi Team He Now Represents

The arrival of Cristiano Ronaldo in Arab football continues to leave a lot to talk about, as there are those who consider that the Portuguese no longer has the level for the big leagues, something that the striker does not lose sleep over.

One Twitter user offered a more in-depth reflection on the state of the five-time Ballon d’Or winner’s career, saying: “Ronaldo in Saudi Arabia?” It’s really over.

“He threw tantrums at United and wouldn’t play, refused to be on the bench, refused to follow club protocol, left without permission, gave an interview to Piers Morgan, lost the World Cup without contributing anything and is now over.”

Fans generally agreed on Twitter, with one writing: “Safe to say Ronaldo’s career is officially over.”

Another claimed: “Ronaldo is that way.”

A third wrote: “Breaking: Ronaldo is finished and currently unemployed.”

Then one fan poked fun at the legendary striker’s choice of destination, writing: “Ronaldo is going to one of the worst teams in the Saudi league lol”, followed by a laughing emoji.

Can the Saudi league be saved by the great Cristiano Ronaldo?

As opposed to Saudi’s Al-Nassr ranking above, ​​Ronaldo (while playing at the top level of European football) gave football fans the best matches winning five Ballon d’Or awards for being Europe’s best player in a calendar year.

Ronaldo has also won five Champions Leagues, numerous top scorer awards, and league titles in three of the continent’s top five divisions. This explains why CR7 was presented with Al-Nassr’s offer to become the highest-paid footballer in the world with a salary of 200 million euros per year, more than double the 90.9 that Kyllian Mbappé receives per year, CR7 enlarged and assured that his contract is unique because he is a unique footballer.

What about Al-Nassr? What was the team’s history before they signed Ronaldo?

Solidly established in the sporting panorama of the region, the team was trained by the Frenchman Rudi Garcia who aimed for nothing less than to make a name for the team and in particular to win this Asian Champions League which still resists it.

On its soil, the Ryad club founded in 1955 has indeed won everything:

In the mid-1990s, Al-Nassr also shone outside its borders: Gulf Champions League (1996, 1997) before the event was gradually eclipsed by its Asian version which the club could not do better runner-up in 1995, Asian Cup Winners’ Cup and Asian Super Cup in 1998.

Al-Nassr, nicknamed “The International” (Al-Aalami), is also proud to have been the first to represent Asia at the FIFA Club World Cup in 2000.

The head coach since April 2021 appointed by businessman Musalli Al-Muammar after several members of the royal family, the club in the yellow and blue tunic whose logo follows the shapes of the country, then experienced a first dip in the mid-1990s and 2000, even narrowly escaping relegation in 2007, and has not dominated its championship since its last title in 2019. In addition to Rudi Garcia, the club also has a solid history with French coaches.

Hristo Stoichkov was the player of the club in 1998:

The team, which has been playing since 2015 on the grounds of the modern 25,000-seat Mrsool Park stadium, currently has several players in its ranks who have passed through Europe and in particular France, such as the Colombian David Ospina, the Cameroonian Vincent Aboubakar, the Brazilian Luiz Gustavo or Spaniard Alvaro.

In the past, former glories of L1 have also passed through Al-Nassr, such as the Algerian Moussa Saïb or the Guinean Pascal Feindouno, but Majid Abdullah, one of the best Saudis in history and the club’s greatest weapon with 72 achievements, occupies a special place in the hearts of the supporters.

Accustomed to being the first, Ronaldo will not however be able to boast of being the club’s first Ballon d’Or: even if he did not leave a strong memory in 1998, this honor indeed belongs for eternity to the Bulgarian Hristo Stoichkov.

Now that we know Al-Nassr is an encouraging platform for Ronaldo, does he feel the same about the club?

“I am a unique player,” Ronaldo said, encouraging himself with his decision to move to Al-Nassr.

“People don’t know the level here. This contract is unique because I am a unique player. It’s normal for me”, stated CR7.

To answer our question we understand that Ronaldo is more interested in changing the Saudi league and is happy to do so because he believes he gave his everything to Europe and it is now time to go another route.

“My work in Europe is done. I played in the best clubs in the world… and I won everything. I am happy, proud to join Al Nassr”, said the Portuguese footballer.

“I can’t wait to discover a new football championship in a different country,” he said, quoted on his new club’s Twitter account and posing with his new jersey, yellow and blue, stamped with his usual number 7.

“Al-Nassr’s vision for men’s and women’s football is very inspiring, we could see during the World Cup that Saudi Arabia was a country with a lot of ambitions and potential,” said an agency which represents the five-time Ballon d’Or and five-time winner of the Champions League.

Ronaldo assured that he had offers from half the world to continue his career with teams interested in his services in Europe, Australia, Brazil and the MLS but he gave his word to Al-Nassr because he believes that people should see other types of leagues, in addition to his work in Europe which was almost concluded by winning everything in the most important clubs.

Ronaldo’s debut could take place when the team resumes its commitments in the Saudi Arabian League, so there are still a few days left for the Portuguese debut on Arab soil.

Lastly, these interesting things happened after Ronaldo signed with Al-Nassr:

Essential Techniques for Integrating Cloud Computing into Your Business