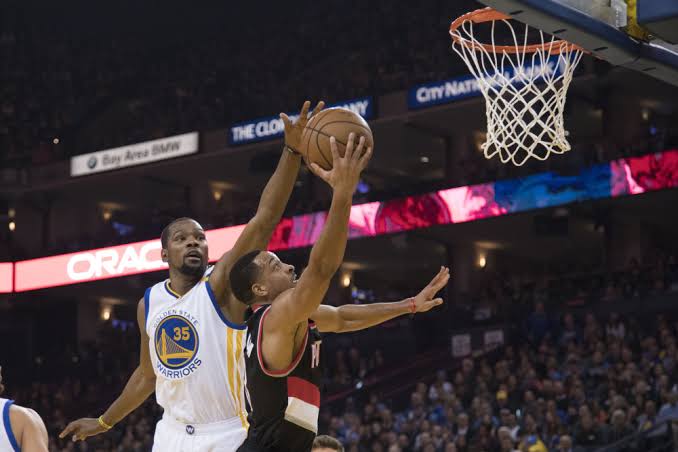 Star guard and one half of the Portland Trailblazers’ deadly backcourt duo alongside Damian Lillard, C.J. McCollum is not a big fan of the Golden State Warriors. In particular, he is not a fan of the way the Golden State Warriors have stockpiled their roster with superstars at every position. He is not a fan of the Warriors signing Kevin Durant after losing the 2016 NBA Finals by surrendering a 3-1 lead to LeBron James and the Cleveland Cavaliers. He most certainly hates the fact that the Warriors managed to sign All NBA center Demarcus Cousins for a little over $5 million this offseason. His frustration must also be compounded by the fact that the Trailblazers have been eliminated by the Warriors on many occasions during the playoffs.
Ever since the Golden State Warriors signed DeMarcus Cousins during the free agency, McCollum has basically been on a one-man crusade against the Warriors. His words have given a public outlet to the thoughts of just about everyone who isn’t a Warriors fan. His disdain and frustration towards Cousins, Durant and the Warriors has bordered close to outright bashing.
However, things between Durant and McCollum really got personal when Durant appeared on McCollum’s podcast, Pull Up with CJ McCollum. McCollum is a former journalism major at Lehigh and he hosts the podcast alongside Jordan Schultz of Yahoo Sports. McCollum has also appeared on numerous sports talk shows and has been hailed as the next breakout star in sports media. The expectations were high from an episode featuring Kevin Durant and the drama that unfolded, didn’t disappoint at all. Kevin Durant giggled and roasted C.J. McCollum and the entire Trailblazers team throughout the podcast.
It’s a hilarious podcast to listen to and the major parts are transcribed here:

CJ McCollum: You know how I felt, bro, I was hot. I don’t know if I was more mad [when you signed or when DeMarcus Cousins signed].

Kevin Durant: Why are you mad about this stuff?

CJ McCollum: What do you mean why am I mad? I’m in the Western Conference. I gotta play you MF-ers all the time as it is, over and over again. We done got eliminated by y’all a couple times in the first round.

Kevin Durant: I mean, you know you’re not … You know you guys aren’t gonna win a championship.
CJ McCollum: Bruh, we have the team. We have the capabilities. Anything is possible.

Kevin Durant: I mean, let’s be honest. Y’all need more. I mean, I like y’all two (McCollum and Damian Lillard). Y’all are hard to stop. But, I mean, come on. You can’t be upset about this!

CJ McCollum: I can be upset because he(Cousins) was a free agent, which means he could have — this is why I was also upset — he could have come to Portland. His agent and (Blazers starting center Jusuf Nurkic) have the same agent. So I’m thinking, ‘OK, you ain’t gonna come to us. Whatever.’ Why you gotta go there, Cuz? And I texted him. I was mad, I got on Twitter. And I really texted him.

Kevin Durant: Yo get out your feelings.

CJ McCollum: I texted him, like, ‘Cuz, what’s up? Why did this happen?’

Kevin Durant: You’re the first person I’ve seen who said that. I was crying on Twitter when I seen that.

Kevin Durant: You wanted him to come to Portland?

CJ McCollum: Bruh I think that anything is possible. I’m just saying, man, you tryna get me in trouble. I’m happy with Nurk. Nurk’s a great big man for us. Nurk’s playing well.

Kevin Durant: I mean you did just say on the airwaves that Cousins should have came to Portland. So you ain’t want Nurk?

CJ McCollum: Of course I wanted Nurk. We coulda had both of em.

Kevin Durant: Y’all not getting both.

Kevin Durant: No way that’s happening. It’s gotta be a nice yin and yang, bro. It’s gonna be too much of one thing with y’all. We’d stop that.

CJ McCollum: So what do you suggest?

Kevin Durant: I suggest you just keep playing, man, and don’t worry about what goes on at the top of things.

CJ McCollum: We right there at the top of things. We were the 3rd seed!

CJ McCollum: We were right there, just slightly below No. 1 an No. 2.

CJ McCollum: Some unfortunate situations happened in the first round?

As the podcast went viral, a Twitter user asked McCollum if it’s ok to ‘begin calling Durant the B word again’. In response, this is what McCollum said: “I still think the b word is harsh and shouldn’t be used. He know that decision was soft but I respect it. It’s like getting jumped with ur brothers by a gang you should’ve beat then joining the gang that jumped u and ur brothers 2 months later & forgetting about your bros.”
Durant was far from pleased after reading that statement from McCollum and had this to say: “So, I would get into a gang fight, lose, plot on my brother for 2 months in our home and then go get the gang we lost to and beat him up? U think that low of me CJ? I just did your f***in podcast. Snakes in the grass boy I tell ya.”
As the situation seemed to grow uglier, McCollum released a statement to clarify his position and choices: “There is no feud y’all gotta chill. It was simply an analogy. I’m done speaking on KD and the warriors bc it’s childish of me to do so and soft lol (will be taken out of context). I’ve always said what I feel but we all know I’ve never been a snake. Back to the grind.”
However, during his recent tour of China, he seemed to still be talking in the same vein. During an appearance on chinese television channel, CCTV, McCollum was asked about his opinion on the recent trend of star players like Kevin Durant and DeMarcus Cousins joining stacked teams in order to easily win championships. This is what he had to say: “I would never do anything of that nature. That’s disgusting. I’m not built like those guys. I was raised differently. I think some players will take that route, but most guys have too much pride, want to win on their own or in their certain organizations that aren’t just gonna jump the bandwagon.”