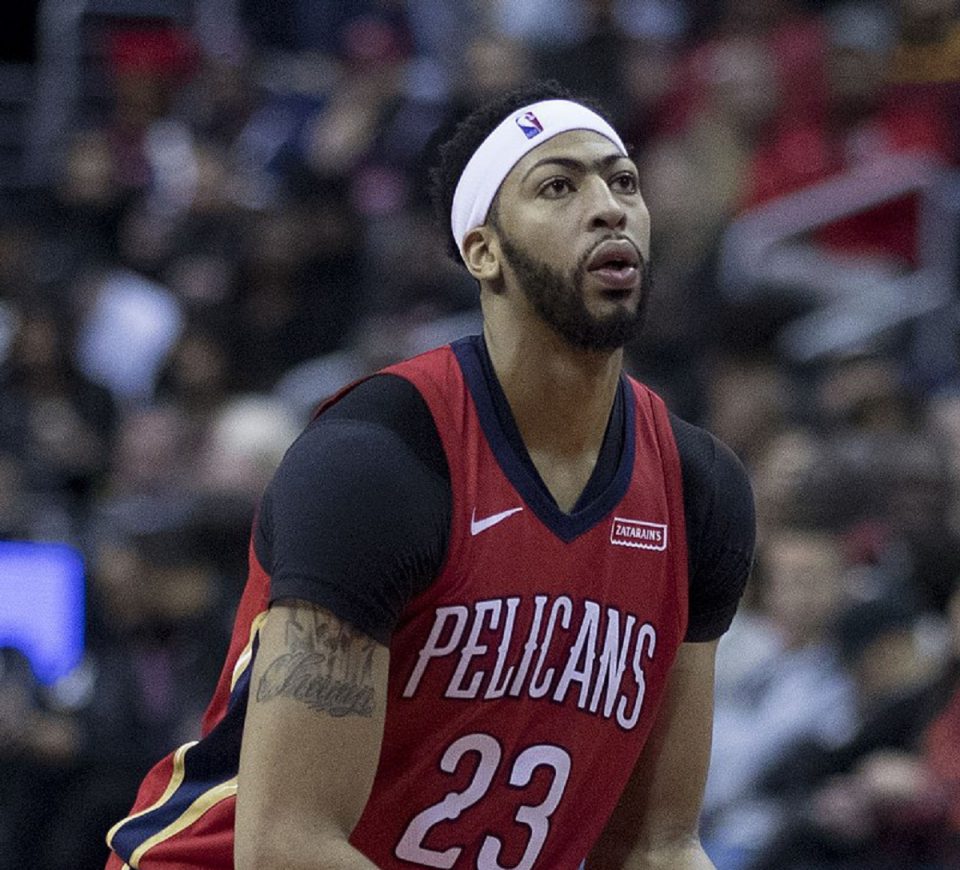 The word “predestined”, from the Latin praedestinatus, indicates a person born with a certain destiny, and if that is true, that would be a foretelling of Anthony Davis in his college days on his way to becoming an NBA All-Star. The school was going crazy, the scouts were very keen and such an investment tends to negatively affect a 16-year-old boy, but fortunately, this was not the case. “The Unibrow” went on to be a Pelicans franchise-man, in addition to being one of the best power forwards in the league established under the LA Lakers. With that being said, let’s look at how the man found his potential, his rise in basketball, his growth in New Orleans, and how he nativated his personal life as a high-level star.

11 Anthony Davis Facts To Know If You Love This Dominant Beast!

Standing at 6 ft 10 in (2.08 m), physically Anthony Davis has often been compared to Marcus Camby and Kevin Garnett for his enormous size and very broad shoulders that in recent years he has greatly strengthened in the gym. The most surprising figure, however, concerns his arms: Davis has a wingspan of almost 200 centimeters, smaller only with comparison to Giannis Antetokoumpo among NBA players. Anthony Davis’s listed weight according to Wikipedia is 253 lb (115 kg).

2. Anthony Davis’s childhood school didn’t even have a basketball team:

Davis’s story is not one that draws tears from family poverty, complex childhood or tragedies to rise from. His story is that of a simple kid who comes to the NBA with the right means to conquer and dominate it.

But let’s start from the beginning: Anthony Davis came into this world in Chicago in 1993 in one of the most infamous neighborhoods of the city (a certain Derrick Rose lived a few blocks away).

Anthony Davis’s father, to keep him away from the road, sets up a mini basketball basket in the garden with which Anthony plays every afternoon. Like any boy from Windy City, he wears the number 23 jersey, but not Michael Jordan’s. 23 is worn to praise his idol LeBron, who at the time of his adolescence was starting to take the NBA. Isn’t it funny to think that Anthony Davis would join his idol LeBron in LA?

Anthony Davis studied at Perspectives Charter School, not really the ideal destination for those who want to play basketball. In fact, the school does not have a gym, for training you have to go to a church a few kilometers away. But despite the low level of competition, the basketball scene was tempting the little Davis.

Davis is not only the center or the power forward of the team, but also the guard, being a better ball-handler than his teammates.

Additionally, AD towers over his opponents averaging 30 points and 10 rebounds per game. Anthony Davis’s childhood technical growth goes hand in hand with his physical one: in 14 months he gained 20 centimeters, going from 1.85 to 2.08 meters.

4. Kentucky University was the beginning of his NBA journey:

Davis’ path continues in Kentucky, famous for having churned out talents such as Rajon Rondo, Larry Johnson, or DeMarcus Cousins.

At the University, Davis made his debut with 23 points, 10 rebounds, 5 blocks, and 3 assists, which suggests a future full of individual and team successes. In two years he wins everything he can on a personal level and sets new records for each category that concerns him (rebounds, blocks, and double-doubles). The Wildcats easily reach the NCAA final where they face the Kansas Jayhawks. Davis scores only 6 points, shooting with poor percentages, but dominates in the defensive half. In fact, he finishes with 16 rebounds, 6 blocks, 5 assists, and 3 steals, numbers that earned him the MOP (Most Outstanding Player) award and the NCAA title. With the university leaving nothing more to teach the boy, Anthony Davis is now ready for the NBA.

5. Anthony Davis landed in the NBA league through the draft of 2012:

The 2012 draft to be honest was not one of the most exciting because a few good players and a lot of flops turned up to be in the NBA.

Anyway, Anthony Davis was selected with the first overall pick by the New Orleans Hornets (the current Pelicans), ahead of Michael Kidd-Gilchrist and Bradley Beal. The selection by New Orleans Hornets was at the time the second-worst franchise in the league, returning from a year of 21 wins and 45 defeats. Lifting the New Orleans Hornets from the ashes wasn’t going to be easy, but Davis’s shoulders were big enough to hold all the weight of an entire city! What a beast!

6. Anthony Davis took the New Orleans Pelicans to the playoffs:

Anthony Davis’s NBA debut promises well: 21 points and 10 rebounds against the San Antonio Spurs, despite the presence of Tim Duncan. But that tall and at the same time, the slender physique does not support him for the whole season.

In December he was forced to stop due to injuries that excluded him from the race for the “Rookie of The Year” award. He returns to the court after the break from the All-Star Game with a better physical condition than that of the previous six months. He travels to 18 points, 10 rebounds, and 2 blocks, and during a match against the Charlotte Bobcats, he scores 6 rebounds with 6 blocks. A successful undertaking in the rookie year only by David Robinson, Hakeem Olajuwon, and Andrei Kirilenko. The prelude to what will be a sophomore season to be delivered to posterity: 21 points, 10 rebounds, and 3 blocks on average have not been seen since the days of Shaquille O’Neal, perhaps the most dominant long man ever.

But after a brilliant start also due to the great performances of the new additions (namely Tyreke Evans and Jrue Holiday), the Pelicans collapsed in the last few games and only hoisted in twelfth place in the Western Conference. Not bad, because the playoffs will eventually come to them a year later, the first time since 2011.

The Unibrow plays a monstrous regular season, finishing third in the MVP race. His technical dominance is there for all to see as well as his plays that fill the top ten of the season, but at the playoffs, the music changes: the Golden States happened to be cut above all and the Pelicans got “swept” in the first round.

7. Anthony Davis now plays for the Los Angeles Lakers since 2019:

In July 2019, the Pelicans traded Davis to the Los Angeles Lakers in exchange for Lonzo Ball, Brandon Ingram, Josh Hart and three first-round picks, including the Lakers’ fourth pick in the 2019 NBA draft. AD made his premier for the Lakers on October 22, 2019 against the Los Angeles Clippers, posting 10 rebounds, 25 points, and 5 assists within just 37 minutes in a 112–102 loss.

On October 29, he became the first Lakers player to score 40 points and 20 rebounds since Shaquille O’Neal in 2003. 4 months later, Davis’ agent Rich Paul announced in January 2020 that they would waive the Lakers’ offer of a four-year, $146 million maximum contract, opting to become a free agent, after which Davis could qualify for a five-year, $202 million contract.

When it comes to two-way players it is impossible to omit the name of Anthony Davis from the circle. His offensive solutions, almost unlimited, ranging from the game in place to the shot from the mid-range, passing through the long-range one, the latter fundamental in constant improvement.

He has also added a decent crossover to his repertoire and has learned to occasionally lead the offensive transition. Few players know how to be so dominant in attack, only he knows how to be the scoring leader of the team and at the same time the best defender and blocker. All without having problems with fouls, indeed, in his career he has more blocks than committed fouls on the score sheet.

All in all, Anthony Davis’s enormous size allows him to cut out his opponents under the boards to collect rebounds, while his long arms, joined at good foot speed, allow him to defend on all five roles.

The basketball player’s showcase of individual trophies is very rich:

10. Anthony Davis net worth and salary:

Money does not bring happiness, but at least it improves life. Anthony Davis is well aware that in 2015 he signed what was then the richest contract in history: a five-year contract worth 145 million dollars, almost 27 million per season. The increase in the salary cup allowed in subsequent seasons to sign much more expensive deals and Davis has now slipped from 1st to 21st place among the highest paid players.

However, the situation could not be reversed. In fact, it is said that the New Orleans Hornets got ready to offer a maxi-contract of 230 million ( 40 million per season ) to avoid losing him to zero in 2020,  but as we all know Davis informed the Pelicans that he would not sign a contract extension. Yes,  on January 28, he requested a trade as he became a free agent in the summer of 2020.

A cut to his salary came just a day later when the NBA fined him $50,000 for making his request public to become a free agent.

Then, signing a contract with the Lakers who offered a four-year, $146 million max extension, opting to enter free agency, where he could earn a five-year, $202 million max contract would make Anthony Davis the new Scrooge in the league, but in January 2020, Davis declined the Lakers.

What would it take, you ask? By the end of the year, the Unibrow re-signed with the Lakers on a five-year, $190 million contract that included an early termination option prior to the fifth season in 2024–25.

11. Charity and life off the court:

A good and generous man, Anthony Davis has participated in several charitable events, donating thousands of dollars to these associations. At one of these he allegedly met Brittney Griner, a WNBA player with whom he was thought to have an affair. In reality it turned out that the two were just friends and she Griner even publicly revealed that she was a lesbian. Today Davis is married to Marlen P and is the father of a little girl, named Nala.

Prior to his marriage to Marlen P, the basketball star was connected to a number of beautiful women such as the gorgeous Dylan Gonzalez who is an American basketball player and former player of UNLV. Gonzales is also a student-athlete in basketball, volleyball, and track and field at the University of Nevada, Las Vegas. She is much younger than the NBA All-Rookie First Team member, having been born on December 9, 1994. Gonzales and Davis began dating in the summer of 2013. It is unclear how long the couple dated before choosing to break up.

Since their breakup, AD moved on to his now wife, previous girlfriend, Marlen, who he reportedly began dating in 2017. The couple has a daughter named Nala together.

Can Physical Therapy Help You Lose Weight? Here’s All You Need To Know

6 Things Older Women Can Do To Remain Healthy