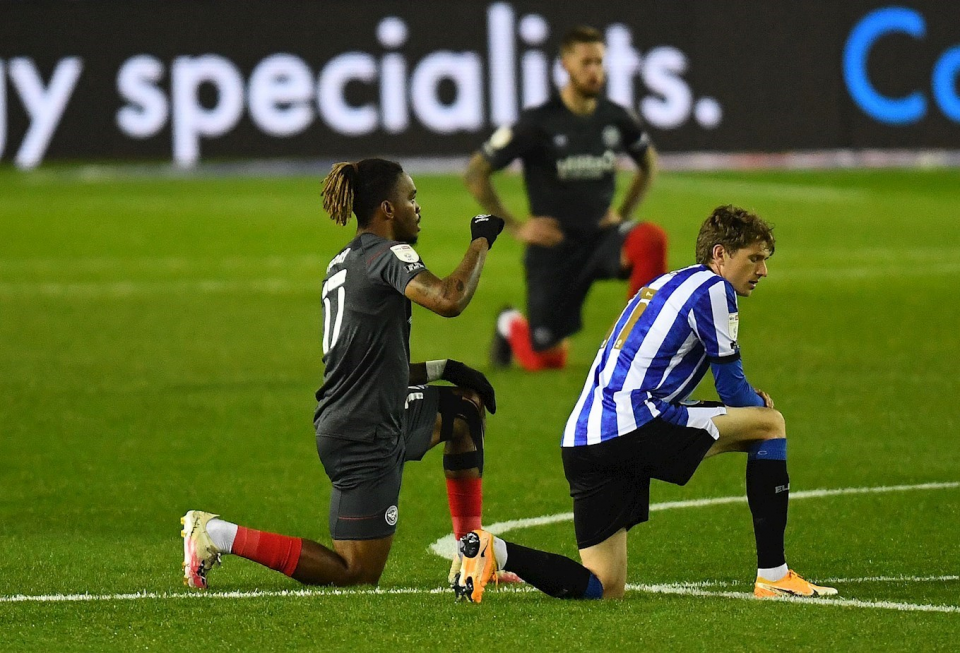 Discrimination is quite common in football. Source: Brentford FC

We are at a football stadium to watch the match between different teams. Each has their own favorite clubs and cheers. Sometimes, however, things have gone too far and discrimination is something happening regularly at football matches. Recently, Millwall has proposed several measures against discrimination and the clubs’ footballers will stand arm-in-arm with their opposition on Tuesday. This aims at anti-discrimination.

Racism in football is always a painful and difficult problem. The fans booed to put pressure on the players, the absence of black representatives in high-ranking positions, or using social networks to insult, … These are all acts of deep racism in football. However, it still happens often, with no signs of ending.

Football is going through a period of crisis that caused the Covid-19 pandemic. But you can watch live football online full matches with Tructiepbongda website. And remember, racism is shameful and sinful behavior that must be stopped.

Discrimination in football is not strange and anti-discrimination measures come after some Millwall fans were heard booing before the 1-0 defeat by Derby at the Den on Saturday. In the match, footballers on both sides took a knee in the fight against racism. The same situation happened at Colchester on the same day, making the Football Association investigate the incidents.

As stated by Millwall, they will stand arm-in-arm with Queens Park Rangers in an attempt to combat discrimination in football. According to Millwall, their moves this time enable people throughout society to unify and root out all forms of discrimination.

Another move drawn support from Kick It Out, Show Racism The Red Card, the PFA, the FA and the EFL is to prepare a banner, showing their support in the fight against racism and hanging in which stadium they play. The Millwall’s player shirt will be replaced with shirts sponsored with Kick It Out. In its statement, Millwall emphasized that it is not their policy to be tolerant of any form of discrimination. More than that, those football fans holding such views of discrimination in football are not welcome at the club.

Millwall’s stance has always been that anybody found guilty of racial abuse is banned for life. The club believes that in the near future, the first audit of board members, staff, volunteers and participants will be an attempt of an ongoing commitment towards equality, diversity and inclusion in every football area.

According to Les Hoos, the club has always support equality and diversity in football while fighting against discrimination in all forms. Talking about its initial approach, Hoos said they were about to request all players to take the knee in order to show their great solidarity. Many others agreed that standing shoulder-to-shoulder with the opposition footballers was such a powerful response. Players are willing to take the knee and this action is hugely supported by the club.

About taking a knee action, there was a time that taking a knee is not supported by Queens Park Rangers and the club even had a policy stating it. Back to this, it was when Ferdinand said in September that such gestures had become little more than good PR. QPR kept that point until the events at The Dell. Warburton revealed that it was the players’ suggestion to take a knee in order to reserve the decision for their trip to south-east London.

Warburton said in an interview that they would stand solidly behind the cause and football players would take a knee. No tolerance of any form of discrimination is allowed and they would show solidarity. Such a good thing to do so that everybody can see that. Players share to Warburton their thoughts of anti-discrimination action and he, without any doubt, completely agrees with those footballers.

Robbie Cowling – the chairman of Colchester, in his public statement, said that the clubs did not welcome supporters who wanted to boo players taking a knee. The club is willing to refund the season tickets to football audiences. The fans at the League Two side won against Grimsby boo so aggressively during the gestures before the kick-off, leaving no spotlight on the performance.

There is no doubt that no matter how hard the battle fighting against discrimination is, black and other ethnic minority people are still the victims of racism. And footballers are not an exception. With good policies toward anti-racism and anti-discrimination actions, black footballers and staff at Colchester United feel that they are no longer underestimated. Opposingly, they feel they are in a privileged position which their ancestors had to pay too much for: blood, sweat and tears. Stating in his public speaking, Cowling said that the position the club had given to black people is what other black people wish to have.

By showing their support and interest in taking a knee, these people are willing to kill racial oppression. More than that, the topic of taking a knee is forced to be a part of internet conversation even if it is uncomfortable for some people to talk about.

The club also hoped that football fans who booed on Saturday can have the full knowledge about the meaning of booing gestures. Therefore, in any future match, what they should do is to remain silent while players do their job at the stadium and while players continue to take the knee before any kick-off. If football fans just cannot follow these things, maybe the best choice is to stay away from football clubs. As stated on Monday, the FA revealed that investigations are underway into crowd-related incidents at both stadiums – The Den and JobServe Community Stadium.

Booing is such an ugly action in a football match because it can hugely affect the mentality of football stars who are in the middle of the match. With more and more clubs and associations taking action against discrimination, in the future, racism and discrimination are expected to absent from football matches, leaving a positive playing environment for footballers to show their talents and skills.

How To Make The Most Out Of Your Workout

Finding Out Which Dog Breed Best Suit Your Lifestyle

4 Tricks to Efficiently Save Money

9 Tips to Boost the Value of Your Small Business