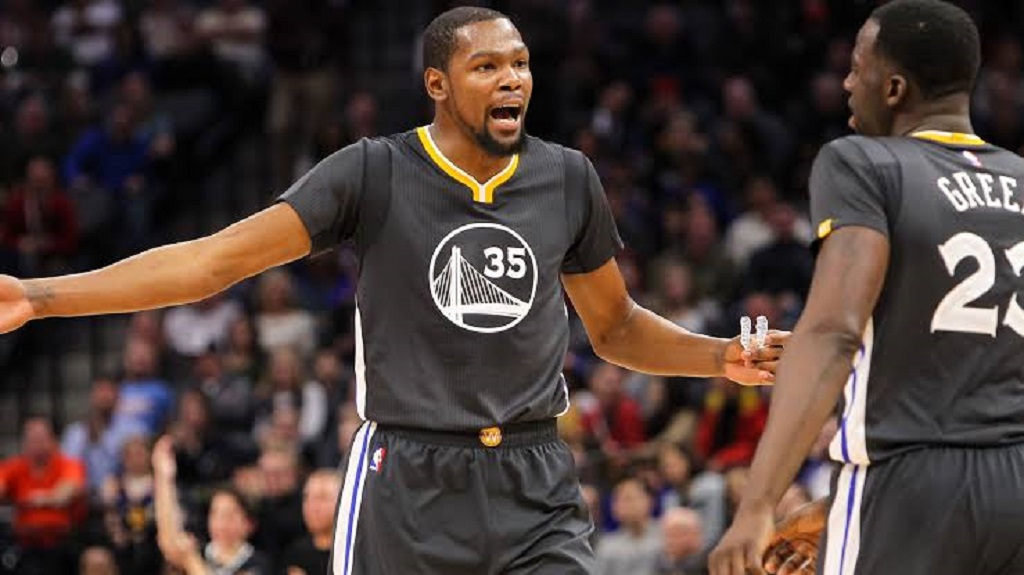 Not very long ago, the Golden State Warriors were steamrolling the competition. Fresh off their back to back championship wins (3rd in 4 years), the Warriors made a grand start to the season and raced to a best-in-the-west 10-1 record.  On the way to the dominating record, Warriors handed a 144-122 thrashing to the dreadful Washington Wizards at Oracle Arena. Bay Area’s favourite adopted son Stephen Curry put on a show for the ages in that game. He scored 51 points in just 3 quarters!! He went 15 of 24 from the field, 11 of 16 from the three point range and made all 10 of his free throws. That was Curry’s sixth career 50 point game and he also became the eighth player in NBA history to score over 50 points while taking 24 or fewer shots.
Not to be outdone, a few days later, Kevin Durant had a magical performance against the New York Knicks at the Mecca of basketball, Madison Square Garden. He scored 41 points in the game, 25 of which came in the fourth quarter, leading the Golden State Warriors to a 128-100 victory. He shot 10-13 in the fourth quarter and dazzled all New Yorkers.
Then, sharpshooter Klay Thompson decided that it was his turn to dazzle the World. He had been struggling with his shot through the season. However, on a Monday night in the Windy City of Chicago, Klay Thompson unleashed a storm. He broke teammate Steph Curry’s record of most 3 pointers made in a game by making 14 of them in 3 quarters!! He rested on the bench during the fourth quarter and finished the game with a whopping 52 points in just 27 minutes.

Such obscene levels of dominance had everyone convinced that this season is a foregone conclusion and the only question that remained was ‘how easily will the Warriors win it all?’
All of that came to a screeching halt with Steph Curry getting sidelined due to injury and the wheels started coming off the wagon on a Monday night game against the Los Angeles Clippers. With the game tied and a few seconds to go, Draymond Green secured a defensive rebound off a missed shot from the Clippers and dribbled it down the floor. He eventually dribbled into a few Clippers defenders and lost the ball, forcing the game into overtime. All this time, Kevin Durant kept asking for the ball to no avail. Even Klay Thompson was visibly upset at not even getting the opportunity to get a shot. The Warriors went on to lose the game in overtime. However, that loss was rendered insignificant by what had happened between Kevin Durant and Draymond Green.
During the huddle before overtime, things boiled over between the two. Things became so bad that someone as emotionally volatile as DeMarcus Cousins had to pull Green away from the huddle. Reportedly, this is what Green had to say to Durant : “You’re a b**ch and you know you’re a b**ch. We don’t need you. We won without you. Leave.” The fireworks didn’t just stop there, Durant and Green continued to go back and forth after the game in the locker room.  Teammates raised their concerns with Green’s decision making, Green raised his concerns with Durant who decided to skip the post game media meeting.
Green’s statement, referring to Durant’s upcoming free agency, shocked the Warriors’ front office and they quickly suspended and fined him. The Warriors organisation acknowledged the importance of Kevin Durant with regards to the team’s chances at success. So they decided to side with him, hoping that it will help him re-sign with the team during the 2019 Free Agency.
Some more light was shed on the aftermath of the incident on the eve of their game against the Rockets. This is what Draymond Green had to say: “Kevin and I spoke, we’re moving forward, it’s no secret I am an emotional player, I wear my emotions on my sleeve and I play with those same emotions. Sometimes they get the best of me and it doesn’t work to my favour. I’m going to live with that. I’m never going to change who I am, I’m going to approach the game the way that I always do and we’ll continue to move forward.”
The Rockets went on to blow the Warriors out 107-86. Then the mighty Warriors went on to lose 109-112 to the lowly Dallas Mavericks as well. After losing to the San Antonio Spurs 104-92 on Sunday night, head coach Steve Kerr had this to say: “This is the real NBA. We haven’t been in the real NBA the last few years. We’ve been in this dream. And so now we’re faced real adversity and we got to get out of it ourselves.”
Earlier, coach Kerr had also commented that the Golden State Warriors are banged up both ‘physically and spiritually’.
After going 2-5 over the last seven games, the blistering 10-1 start seems to be a thing of the past. This is also the first time that the team has lost three in a row since Steve Kerr became the head coach. Prompting him to label the current situation ‘the most difficult regular season stretch since he took over the reigns of the team’.
With both Stephen Curry and Draymond Green out due to injury, the immediate future of the team seems shaky. However, they still have Kevin Durant and Klay Thompson available to play and their wild card, superstar center, DeMarcus Cousins is on track for an early 2019 return to action.
Drama and losses might have suddenly become the new norm for this juggernaut of a team but they definitely have enough capable hands on deck to rescue this ship from troubled waters. The regular season schedule will also help them out a little. They have a four game home stand at the Oracle Arena, a place where they have decimated opponents this season, on the way to an 8-1 record.

Was The French Team Strong Enough To Play The World Cup Finals?