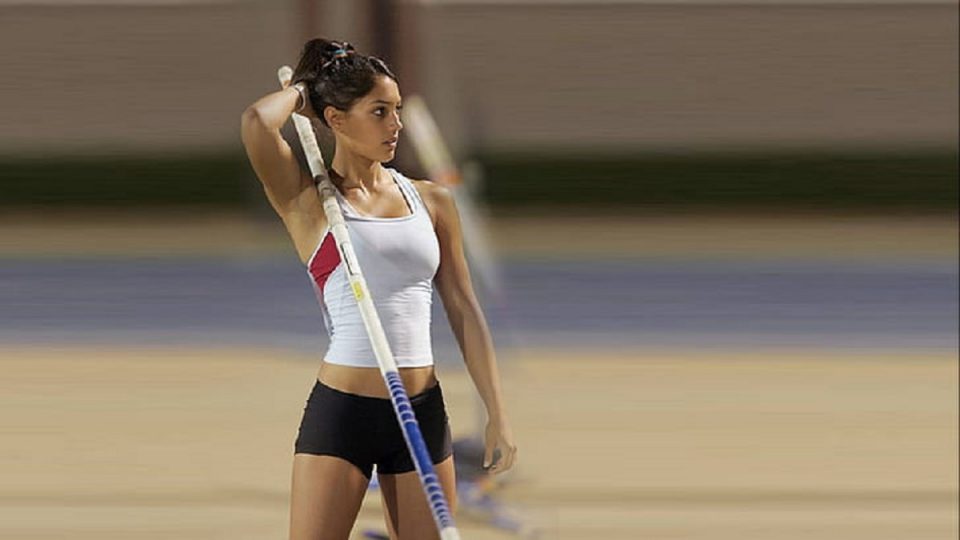 Allison Rebecca Stokke Fowler is both a track and field vaulter, an athlete and a fitness model. She is popular for breaking many American records in competitions since her early school days. Born on 22nd March 1989, she has a brother David Stokke who was once a national level gymnast and a husband who is a professional golf player. Allison lives with her family in Newport Beach, California. Allison completed her college at the University of California- Berkley and school at Newport Harbour High School where she broke a few records in pole vaulting. Read below to know more about Allison Stokke.

Allison Stokke loved pole vaulting when she was in school. Fortunately, she was born in a family that took great interest in sports and supported her dreams. Allison had once tried gymnastics just like her brother but did not do well. Instead, she practised pole vaulting and excelled in it. Allison Stokke won the US Championship as a high school freshman in 2004 when she broke the school record in the age 15/16 category, scaling 3.86m (12 feet and 8 inches). In 2005, she broke another record while studying by scaling 4.11m which is 13 feet and 5.75 inches.

Just after her new record, she broke her ankle while practising and was advised by her doctors to take a break. This made Allison stop practising for the next six months. However, she recovered when she was in high school and came back stronger. She broke another record by hitting 4.14 m i.e., 13ft 7in and became California State Champion.

Many sportspeople recognised Allison’s thriving career and she earned an athletic scholarship to study at the University of California. There she became a member of the California Golden Bears Team. When in college, she took part in many championships and earned academic honours. She was eight in the PAC 10 championship and NCAA indoor championship. Allison Stokke’s sports career bloomed in the next few years until she stopped pole vaulting and choose to work as a model for fitness brands.

Rickie Fowler is the one who gained Allison Stokke’s heart out of all the men who tried to win her heart. In 2017, the two made their affair public with an Instagram photo showing them at a Moto GP race together. Rickie Fowler proposed to Allison Stokke in 2018, and their love blossomed swiftly over the years. The pair had been engaged for a year before deciding to marry. Allison Stokke and Rickie Fowler married in 2019 and have been happily married ever since. The events of Rickie and Allison’s meeting and how long they dated before publicly announcing their relationship are unknown. What is amazing about the two, though, is that they are both sports lovers.

Allison Stokke and With Leather issue

When Allision was 17 years old, she became quite famous on the internet not because of her pole vaulting but for something else. Her picture photographed on the Californian track and field website was reposted by another infamous sports blog named With Leather. The blog had a male fanbase mostly and objectifies women sports personalities. Allison’s photograph taken with good intentions, was reposted with a caption, “Pole Vaulting is Sexy, Barely Legal.”

The photo spread overnight with the caption and comments flooding from every popular news channel. Allison Stokke was all over the internet, posts, tweets and memes despite her being just 17 years old and pursuing her sports career. Many big media houses wrote blogs about her and even invited Allison for photoshoots and interviews.

The photo that should have aimed at Allison’s sports career actually ruined her as it garnered unwanted attention instead. This newfound fame distracted Allision as she was very young. She sunk into depression as she was now being pursued by grown men rather than recognised as a pole vaulter.

The University of California decided that they will not post her picture on their school’s website under the athlete segment as they got many uncontrollable emails and men asking for Allison’s signed photograph. However, this new fame made some good things for Allison as well. She started getting offers from big athlete brands for sports modelling and partnerships. Her parents supported her and helped in handling the media pressure while she focussed on her building her career once again.

Allison Stokke is a model who specialises in sportswear. She’s partnered with and modelled for several sporting companies, including Nike, Athletica Athleisure in 2015, and Uniqlo in 2016. She has also collaborated with GoPro on a YouTube vlog series in which she discusses Pole Vaulting while promoting their product’s camera function.

Common Hulu Problems and Its Fixes