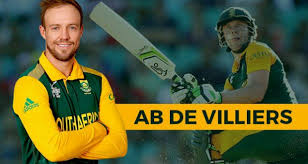 Former South Africa captain AB de Villiers announced his retirement from international cricket with immediate effect on Wednesday. The 34-year-old, who played in 114 Tests, 228 ODIs and 78 T20Is for South Africa, took time away from the longest form of cricket in 2017. “I’ve had my turn and, to be honest, I’m tired,” De Villiers said in a video message posted on his Twitter handle on Thursday. “This is a tough decision. I’ve thought long and hard about it and I’d like to retire still playing decent cricket. “It would not be right for me to pick and choose where, when and in what format I play for the Proteas. For me, in green and gold, it must be everything or nothing.”

The man who showed the world that batting 360° is an easy task. All the best for your future endeavours @ABdeVilliers17, thank you for all the unforgettable memories! pic.twitter.com/9r4AAQDKfj

The Highest T20 Scores in History