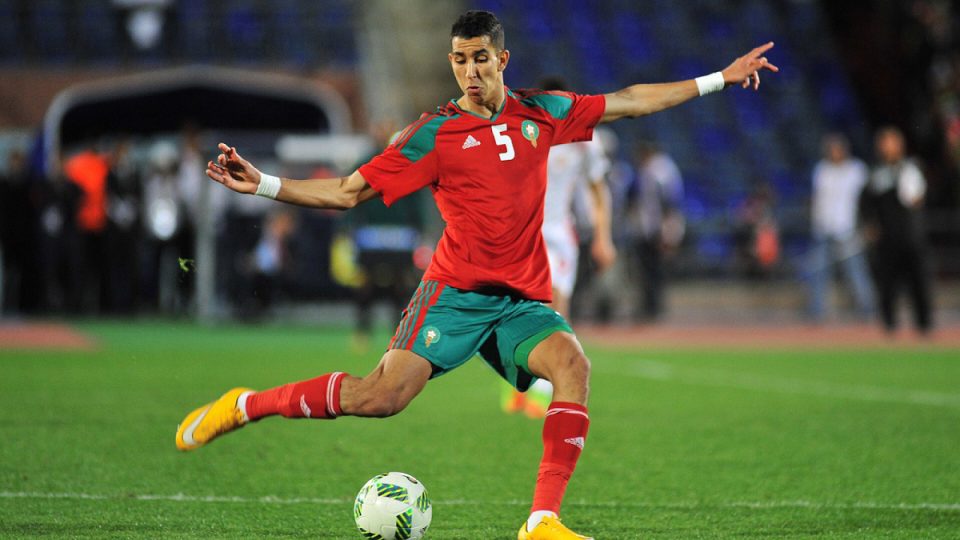 Jawad El Yamiq is a Moroccan international, who played in his country of origin for Olympique Khouribga and Raja Casablanca. Born on July 29, 1992 in Khouribga, Jaouad El Yamiq had spent five years with his training club to join Raja during the 2016 summer transfer window. In January 2018, he signed a three-year contract with the Italian club Genoa CFCs.

Since making the leap to Italian football with Genoa in 2018 and later being loaned to Real Zaragoza, where he played 13 league games in the silver category of Spanish football, he arrived at Real Valladolid in the summer of 2020 and with the white and violet jacket he was officially added in the First Division with 19 games and more than 1,300 minutes of competition. These days Jawad El Yamiq is going viral for his style of celebration during the 2022 FIFA!

The Atlas Lion and Real Valladolid defender, Jawad El Yamiq, played an important role in the national team’s victory over La Roja (Spain’s national football team)on the evening of December 6. The Atlas Lions clinched their ticket to the quarter-finals in the penalty shootout.

The Morocco-Spain meeting during this World Cup will remain in the annals of the history of national football. Morocco has succeeded in becoming the first Arab country to advance to the quarter-finals of a World Cup.

Jawad El Yamiq came on after Nayef Aguerd was injured. He was assured in defense, standing up to the men of Luis Enrique, who hoped to defeat Morocco on penalties. At the microphone of Bein Sport, El Yamiq indicated after the meeting that the victory of the Atlas Lions was possible thanks to God and the vision of Walid Regragui, who knew how to motivate his troops and use the right tactics. “He told us to leave the ball to them, it was the best way to tire them…”, he declared. Jawad El Yamiq added this victory as a source of pride for the Atlas Lions.

After taking his team forward, Moroccan international player Jawad El Yamiq is all over the news feed thanks to one action: kissing the head of Pepe after he missed the shot in Morocco’s stunning win over Portugal during this World Cup.

After Morocco’s victory against Spain and the historic qualification for the quarter-finals of the World Cup, a certain uncertainty loomed over the coach of the Atlas Lions (Walid Regragui) before the match against Portugal but now the tables are turning around immensely thanks to players like Jawad El Yamiq.

During the World Cup 2022 after the victory of Morocco, Jawad El Yamiq raised the Palestine flag to celebrate the Atlas Lions’ victory over Canada (2-1) and their qualification to the second in the World Cup, which is played in Qatar.

On social networks, photos and videos of the players of the national team have been broadcast, showing the teammates celebrating in the stadium and interacting with their supporters, who celebrated this historic coronation. Indeed, Morocco’s first and last qualification for the second round of the World Cup dates back to 1986.

Morocco national team defender Jawad El Yamiq was one of the first people to take out the flag.

On the Palestinian side, especially on social networks, many of the videos are also broadcast. It shows residents of the Gaza Strip following Morocco’s matches in the World Cup and supporting the Atlas Lions. A Palestinian song was also dedicated to them.

5. He was almost kicked out before the World Cup:

Injured in La Liga, the Moroccan central defender of Real Valladolid, Jawad El Yamiq was given away for three to four weeks, which would have compromised his chances of participating in the 2022 World Cup. Thankfully on November 10th it was announced that Jawad El Yamiq was named in Morocco’s 23-man squad for the 2022 FIFA.

The Moroccan central defender was substituted in the first half of his club Real Valladolid’s game against Getafe just months before. “He suffered from a muscular injury to the vastus medialis of the left quadriceps,” his club announced in a press release.

The subject of speculation, with some saying that his chances of being selected for the World Cup, Jawad El Yamiq denied the rumors about his state of health saying he will be training soon and be back!

Regretting the remarks claiming that “the dream of the World Cup has evaporated for him”, Jawad El Yamiq reveals: “I followed the development of my state of health with a great Spanish doctor. I will be physically and mentally ready in record time”. It helped, Jawad El Yamiq is playing very well.

6. Like a true lion, Jawad El Yamiq fears no opponent:

In a press conference, Jawad El Yamiq accompanied by his teammate Abdelhamid Sabiri showed themselves to be calm and determined as Morocco entered the 2022 World Cup.

It’s amazing how much Morocco has advanced currently even beating Portugal 1-0 as of December 11th, 2022. In hindsight, it might not be a surprise because, on November 19th, four days before the match against Croatia, Jawad El Yamiq and Abdelhamid Sabiri showed a certain confidence and assurance

“We have elements that evolve in the biggest championships. We are able to challenge anyone. I hope we will live up to expectations,” said the central defender.

“Any player trained in Morocco dreams of donning the national colors. It’s an honor for me and I hope to be on my best day, ”he continues and finally concludes by saying “Us players have keenly studied the strengths and weaknesses of each of our opponents. Belgium have quality players, but we are ready to fight,” added the player from Valladolid.

7. Jawad El Yamiq might be traded to FC Lorient:

Already in the sights of the French team FC Lorient since last summer, Moroccan international Jawad El Yamiq is still of interest to the Breton club which is looking to strengthen its defensive line.

FC Lorient hopes to recruit the Atlas Lion with experience as a central defender to fill their defense before the next Ligue 1 season. The former Raja player made 25 appearances in the Spanish second division last season and scored one goal for the Valladolid side.

The Atlas Lion (currently still playing in FIFA 2022), who also played in Serie A with Genoa, has 11 selections with the national team (two goals). FC Lorient will have to reach an agreement with Valladolid to buy out the remaining years of Jawad El Yamiq’s current contract.

Jawad El Yamiq will be linked to Real Valladolid by a four-year contract, i.e. until June 30, 2024.

Currently, the Moroccan international Jawad El Yamiq, who played last season with Real Zaragoza (2nd division) in the form of a loan from Genoa, is ofcourse under contract with Real Valladolid, a first division team in the Spanish championship chaired by Brazilian star Ronaldo Nazario.

Since his arrival last January, El Yamiq has earned his place as an indisputable starter in the technical plans of Zaragoza coach Victor Fernandez.

Who Is Jesse Rutherford? The Man Billie Eilish Loves To Touch!