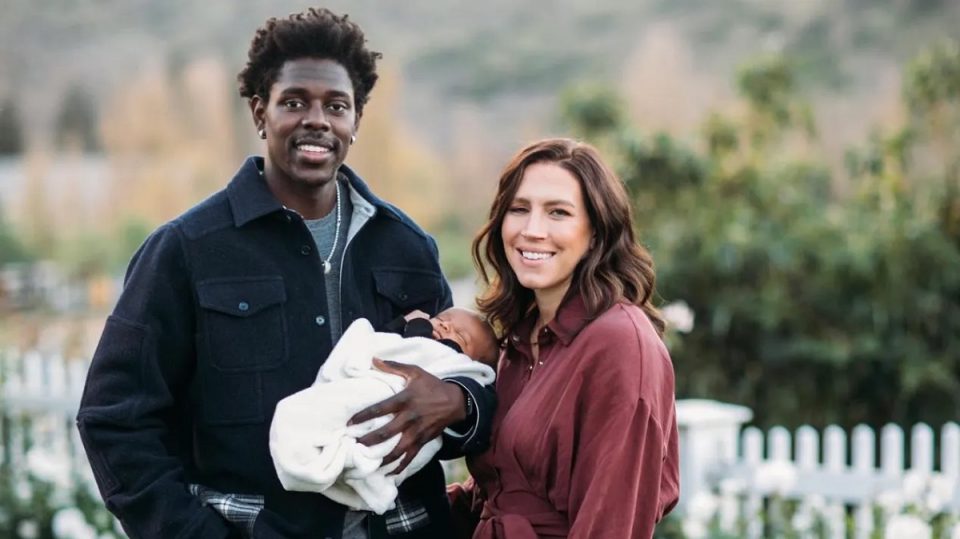 Jrue Holiday’s Wife Lauren Holiday Is So Happy Now: 7 Things About Her!

Although he plays for the Milwaukee Bucks in 2022, NBA star Jrue Holiday was popularly known in The Boston Celtics for his defensive abilities in the league. Both Jrue Holiday’s wife Lauren Holiday and the NBA point guard make the perfect athletic couple. We explore why!

Lauren Cheney is a former American women’s soccer midfielder who spent eight years (2007-15) with the national team (playing for Kansas City FC and for the US national team).

Despite an open-heart surgery as a 3-year-old, Lauren grew up to be a two-time Olympic gold medalist. To add to her track record, she won the FIFA World Cup championship in Canada in 2015.

Holiday was born with a heart defect and had open-heart surgery when she was three years old. Because doctors recommended to her parents that she play sports to strengthen her heart, she took up soccer and basketball at an early age and was an outstanding soccer player before she was six. From the age of six to twelve she played in boys’ teams and then switched to Carmel United Heat.

During her early days, in 2009 she played for Pali Blues in the W-League (the same year she met Jrue Holiday) and since 2010 Lauren played for the Boston Breakers and FC Kansas City in the NWSL.

While at both Ben Davis High School and UCLA, she received multiple awards and was a top scorer, scoring several game-winning goals.

Lauren Holiday became the first player in NWSL history to retire her jersey. After winning the MVP award in 2013 and winning the Golden Boot the same year, Lauren has become a household name in her playing career.

4. How did Jrue Holiday meet his wife Lauren Holiday?

Lauren is the 2014 American Football Female Athlete of the Year, but the pair didn’t meet at this award ceremony, instead, the talented duo first met as the UCLA Jrue athletes were eventually drafted by the Philadelphia 76ers in 2009 and the two began their love life. The Holidays finally announced their marriage in 2013 when Jrue was set to play for the New Orleans Pelicans.

Sharing a similar profession brought the holidays closer during their early days at UCLA. And since then, it’s been a great road for the two of them. Lauren has been quite supportive, and honest about Jrue’s performance in public, and the couple maintains a keen interest in each other’s athletic lives.

The power couple keeps each other going as they discuss each other’s game last night or what they could have done better.

5. Lauren Holiday had to battle a brain tumor during her pregnancy:

Lauren Holiday, who was a midfielder for the U.S. women’s national soccer team, retired in the prime of her career. This was in large part, to start a family with her husband Jrue Holiday, the point guard for the Milwaukee Bucks. The family plans did not include brain surgery.

“Devastating,” Jrue Holiday said of the diagnosis. Fortunately, the tumor was operable and most deserving of good news: it was not a threat to the Holidays’ unborn daughter. Doctors were confident Lauren would return to full health after successful surgery.

The brain surgery, however, would need to wait until after Lauren gave birth, pushing the procedure and her recovery well into the NBA regular season.

6. Lauren Holiday’s brain tumor had to grow with her unborn daughter:

When Lauren was diagnosed with a brain tumor in 2016, she was six months pregnant with their daughter. Jrue Holiday’s wife Lauren Holiday was at risk of losing her child so the tumor surgery was pushed until 2021. But little did the couple know of their horrific encounter with a brain tumor in 2017. Holiday was then employed by the New Orleans Pelicans – and it would affect his NBA career slowly.

Finally after his wife was scheduled for surgery in early 2019, Holiday put things into perspective and opted out of the start of the season in order to support his family.

Jrue took time off from the league last year in 2021 to care for his wife at this time. Initially the plan was to compete in the upcoming NBA Championship Finals with the rest of his Milwaukee Bucks teammates in a mouth-watering affair in the absence of hooper superstar Giannis Antetokounmpo. But Jrue’s wife, Lauren Holiday, and her battle with a brain tumor that began in 2017 forced him to step back.

Well, everything went well and now they have two children.

“The most important thing for Jrue to do right now is to be with his wife and family. Each of our coaches and players understands what Lauren and Jrue are going through, and they know we have their backs 100%. We will continue to do everything we can to support them and help them through these tough times,” Pelicans head coach Alvin Gentry stated at the time.

7. Where is Lauren Holiday now?

After undergoing a successful surgery Lauren Holiday is in good spirits right now. Jrue Holiday and his former wife, a USWNT World Cup winner, welcomed their second child in 2020. They named him Hendricks.

As Lauren Holiday was sponsored by brands such as Under Armor and Chobani, we see a brighter future for the sporting family!

Not only that, the NBA couple decided to donate their NBA bubble salary from the pandemic, after Jrue was struggling to mentally play through the pandemic. Luckily Lauren helped him find a purpose after he joined the bubble, averaging 15 points and five assists per game.

How to Clear Your Criminal Record and Reap the Financial Benefits