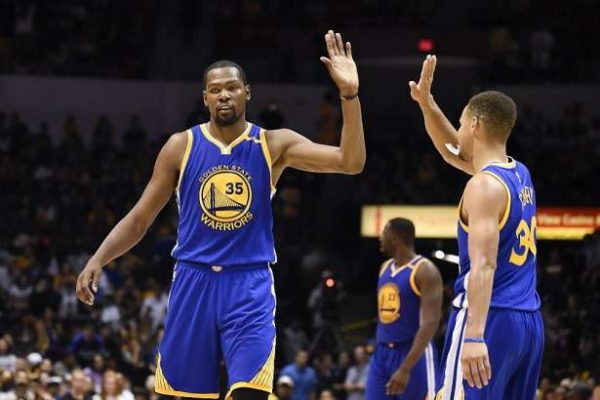 The Golden State Warriors have dominated the NBA for the last 4 seasons. With a team featuring Steph Curry, Kevin Durant, Klay Thompson and Draymond Green; nothing less should be expected. However, their sustained dominance has disgruntled a lot of fans. They say that the Warriors juggernaut is bad for the NBA, the league has become less competitive and the championship is a foregone conclusion
However, that is not entirely true, the Golden State Warriors are a great team, one of the greatest of all time, and here are 3 reasons why they are great for the NBA:

Basketball is a team sport. However, it is also a sport where superstars tend to dominate with a reluctance towards sharing the limelight. This has caused ‘superteams’ like the Shaq and Kobe Lakers of the early 2000s to implode. However, the Warriors play beautiful team basketball. The ball moves throughout the court and all of the superstars are ready and willing to pass up on their good shots to set up a teammate’s great shot.

2. They have complimentary talents

Far too often, teams try to stuff their roster with talented pieces, without thinking if those pieces will actually fit. Case in point, the 2017-18 Oklahoma City Thunder. The trio of Russell Westbrook, Paul George and Carmelo Anthony looks great on paper. However, they are 3 ball dominant players who don’t do much to lift the other players around them. Hence, the on court performance was messy at best. In stark contrast, take the 2017 Finals Game 3, Warriors vs Cavaliers. Steph Curry maneuvered around the court, ran from screen to screen, made long range threes and circus layups. Klay Thompson added 6 threes, Draymond Green made great passes while defending relentlessly, and with the game on the line, Kevin Durant dribbled down the court and rose above LeBron James to bury the game winning three. Everyone utilised their unique talent for the benefit of the entire team.

3. They are fun to watch

Let’s talk about another play from Game 3. Curry dribbled the ball down the floor, and passed the ball to Durant. Even before he caught the ball, Durant noticed two Cavaliers defenders closing in on him, leaving someone free. The ball reached his hands, and it was gone immediately…..to an open Klay Thompson, who promptly made the three. To quote the Sacramento Kings’ play-by-play announcer Grant Napear, ‘If you don’t like that, you don’t like NBA Basketball!’