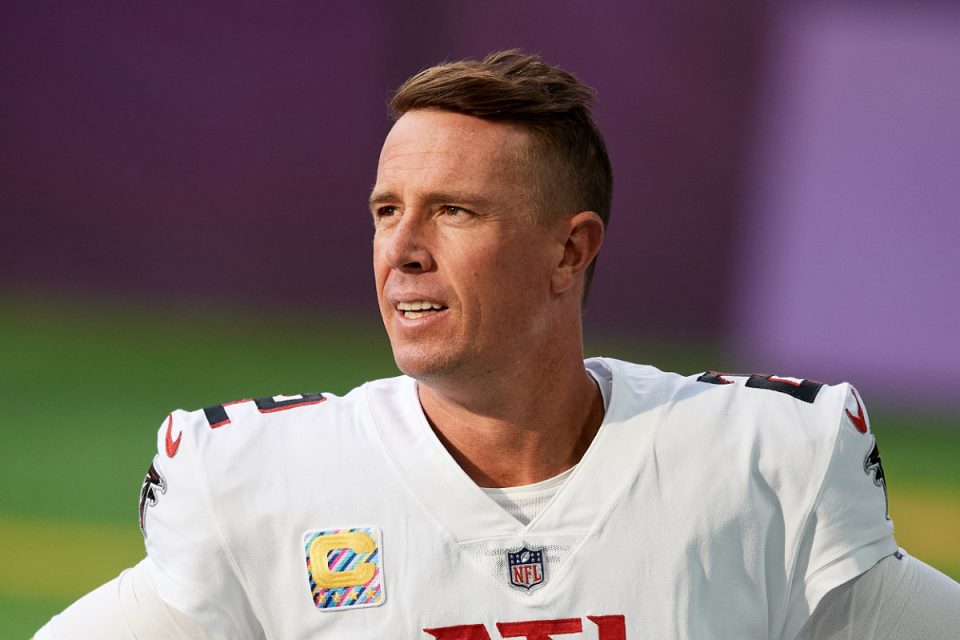 Matt Ryan also known by his nickname “Matty Ice” is an American football quarterback who plays for the Indianapolis Colts of the National Football League.  He used to play for the Atlanta Falcons of the National Football League and for Boston College where his team won three straight bowls. One amazing fun fact about Matt Ryan’s career is that the quarterback threw at least 20 touchdown passes each season between 2009 and 2021, setting a franchise record for the Falcons. Want more fun facts about his life and career? Keep reading!

Matt Ryan: 13 Cool Things About His Personal Life And Career

2. He is a native of Exton, Pennsylvania:

Matthew Thomas Ryan attended the William Penn Charter School in Philadelphia, where he was a starter on the football team for three years.

3. He comes from a football family:

Ryan has three siblings and one of Matty Ice’s brother Mike is married to Ryan’s wife Sarah’s sister Maggie and they have three children together.

Matt’s uncle was also a quarterback at Boston College. Matt Ryan’s cousin Mike McGlinchey is an offensive tackle for the San Francisco 49ers.

4. Matt Ryan was traded to the Indianapolis Colts:

Back in March 2022, it was revealed that Matt Ryan was going to be a new player for the Indianapolis Colts. A page turns in Atlanta, as the legend of Atlanta closes a beautiful page that began in 2008 when the Falcons selected the former Boston College in the NFL Draft.

He left Atlanta for the third round of the 2022 NFL Draft and entered in ideal conditions: an excellent offensive line and the best RB in the NFL.This a meager compensation for this experienced veteran who can bring a lot to the Indianapolis Colts who need security as a quarterback.

Speaking of being a veteran, Matt Ryan leaves Atlanta with a very solid record, four Pro Bowl selections, and above all an MVP title in 2016. But more than titles and statistics, Matt Ryan was the face of this Atlanta franchise for many years and will forever remain a QB who gave everything for his franchise by allowing the Falcons to reach the Super Bowl in particular.

The real reason why Matt Ryan left Atlanta was because the quarterback no longer felt he had anything to offer Atlanta and did not seek to negotiate a new contract. Conversely, his choice went to the Colts, which he sees as a franchise that has the necessary elements to win. In lieu of him leaving, the team reconstruction began in Atlanta with the whole attack to be redone, whether at the level of the receivers, the offensive line and now the QB position

6. Matt Ryan’s Net Worth and Salary as one of the highest paid footballers:

While he was still playing for the Atlanta Falcons, Matt became the highest paid player in NFL history and the first quarterback to earn at least $30 million a year after signing a five-year, $150 million extension contract with the Falcons.

When he was drafted in 2008, he signed a six-year contract totaling $72 million. This once made him the fourth highest paid quarterback in the NFL. Around the same time, he also signed with Nike and AirTran for their product endorsements. In 2008, he was named the starting quarterback for the season opener against the Detroit Lions.

7. Besides football, he is also a keen golfer:

He took part in tournaments such as the American Century Golf Classic. During his youth, he was a talented sportsman who also played baseball and basketball and captained all three teams during his senior year.

Matt Ryan started attending Boston College in 2003, and played for the Boston College Eagles. It was a year later in October 2004 when he made his varsity football debut. In his first game against UMass Minutemen, he had two assists for sixteen yards. In the same year, he received the Freshman Male Scholar-Athlete Award. From 2005 to 2007, he led the collegiate team to three consecutive bowl victories. During his college career, he won several honors such as the Manning Award and the Johnny Unitas Golden Arm Award and was also named the MPC Computers Bowl Most Valuable Player.

9. Matt Ryan is married to a woman named Sarah Marshall:

When the movie ‘’Forgetting Sarah Marshall’ came out in 2008, Sarah thought it was hilarious. The marketing campaign for the film featured billboards saying things like ‘You stink of Sarah Marshall’ and ‘My mom hates you Sarah Marshall,’ so she had a little fun with those billboards.

“Every time I got the chance, I took a picture with a sign”, said Matt Ryan’s wife. “Even to this day, when people find out my name was Sarah Marshall, they think it’s cool,” she said.

Like the American football quarterback, Sarah Marshall was also a star athlete in school. At Boston College, she played point guard for the women’s basketball team and the two met when they were student athletes. During an interview with a magazine, Sarah recalled how she and Ryan met when they ran into each other in the weight room.

Both Ryan and  Sarah Marshall decided to hang out and since they knew a lot of the same people, it was shocking mostly with a group of her friends. This was when Sarah Marshall, his future wife, realized they were on their first date. ‘Me and three of my teammates, so four girls were going to see a movie and I invited Matt to see Man on Fire ,’ she recalled. “I felt bad because it was Matt and all these girls. But he was a good sport about it. At that moment, I knew he had a good one.’

11. Sarah had complications during her pregnancy with Matt’s twins:

In November 2017, the couple announced that they were expecting twins, but Sarah had complications. Luckily within 5 weeks, she gave birth to twin boys Johnny Matthew Ryan and Marshall Thomas Ryan.

In April 2018, Sarah gave people an update on how the twins were doing.

“It’s been a long and challenging road, but it’s all been worth it,” he told the publication at the time. ‘Matt and I couldn’t be happier to have you home.’

Via Instagram, She also informed fans of what had been going on explaining that her little ones, “were small but tough and fought through their time in the NICU to become strong enough to come home.”

12. Everyone was blown away by his 2008 rookie performance:

In the 2008 NFL Draft, Matt Ryan was drafted by the Atlanta Falcons as the third overall pick. Earning a six-year contract for $72 million, he was immediately selected as a starter by the coaches and scored a touchdown on his first pass in the NFL. In October, he was voted Rookie of the Month and, at the end of the season, Offensive Rookie of the Year.

Matt’s performance helped him be the first rookie quarterback to start a season for the Falcons since 2001.

In 2000, his first NFL pass for a 62-yard touchdown to Michael Jenkins made him the first quarterback to throw a touchdown on his first career NFL pass since Michael Bishop. After Matt’s performance shot up in one game against the Kansas City Chiefs where he completed the longest touchdown pass of his career for 70 yards to Roddy White.

The following week, he completed passes to six different players. He threw for 194 yards and two touchdowns in a game against the Green Bay Packers. In October, he was named NFC Rookie of the Month, becoming the first player in Falcons franchise history to receive the honor.

He finished the season with 3,440 passing yards and 17 touchdowns (one of them from his own streak) with just 11 interceptions, becoming the Falcons’ first rookie quarterback to break that record. He was named the AP NFL Rookie of the Year and named to the All-Rookie Squad for the 2008 season.

FUN FACT: Thanks to his performance, he was elected by his teammates as offensive captain at the end of the season.

During the 2009 season, he got injured and had to miss some games. Despite that, he managed to finish the season with 2,916 yards with 22 touchdowns, 14 interceptions and an 80.9 quarterback rating. He continued to perform brilliantly the following season and was named the 52nd best player in the league on the NFL’s Top 100 Players of the Year list.

He was also invited to the 2011 Pro Bowl. Throughout his career, he has proven to be one of the best players in the NFL.

He continued to play well in the 2015 season, although his team was unable to make the playoffs. He finished the season with 21 touchdowns and 16 interceptions.

The 2016 season proved to be very important for Ryan as he had a career-high 4,944 yards and 38 touchdowns with seven interceptions. Although the Falcons reached the Super Bowl, they were beaten by the New England Patriots 28-34. For his performance, Ryan was named the NFL Most Valuable Player of the Year as well as the 2016 NFL Offensive Player of the Year. He also won the Bert Bell Award.

On February 5, 2017 he was in the Super Bowl for the first time, but lost it with the Falcons 28:34 against the New England Patriots.

His amazing performances continued the following season and he was named to the NFL’s 100 Greatest Players list in 2017.

In the 2018 season, Ryan was able to build on his MVP season in terms of statistics, he threw 35 touchdowns with seven interceptions. However, he failed to qualify for the playoffs with the Falcons. On December 30, 2018, he caught a pass from wide receiver Mohamed Sanu for a touchdown in the game against the Tampa Bay Buccaneers (final score 34:32). It was his first pass catch in the NFL.

The Falcons began the 2020 season by losing all of their first five games, some with resounding opponent comebacks, leading to the sacking of coach Dan Quinn.

The first victory came in the sixth round against the Minnesota Vikings in a game in which Ryan passed for 371 yards and 4 touchdowns, being awarded as the NFC offensive player of the week.

In the 15th round, he overtook Fran Tarkenton in tenth place for past career touchdowns. His season ended by leading the league in attempted and completed passes and in fourth place with 4,581 yards passing.

On March 21, 2022, he was traded to the Indianapolis Colts for a third-round pick in the 2022 NFL Draft. In the first game with the new jersey with the Houston Texans, he recorded 352 yards, two touchdown passes and an interception. He also became the second fastest player in history to pass 60,000 yards, behind Drew Brees. The first win came in week 3 over the favorites Chiefs in which he passed for 222 yards and 2 touchdowns but also continued to have troubling fumble issues.