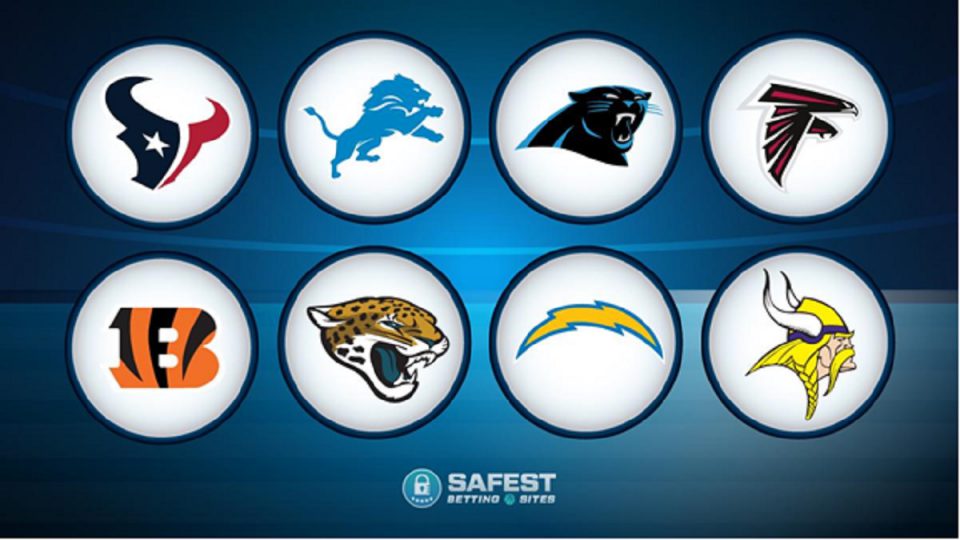 The Super Bowl began with the 1966 regular season of the National Football League. It replaced the NFL Championship Game before the league officially merged with the American Football League (AFL).

Since its inception in 1967, 12 NFL teams have never won the Super Bowl.

Who do you think will win in 2022? Check out our online betting guide before placing a bet on your favorite NFL team

Here are some of the teams that have yet to win the big game.

Among the 12 teams that have never won a Super Bowl, more than half come from the AFC. After Tom Brady won last year’s Super Bowl with the Tampa Bay Buccaneers, the NFC now leads the AFC with Super Bowl wins by only one game.

Brady has one of the most illustrious Super Bowl careers in NFL history, with seven wins and four MVPs.

From best to worst, one of the first teams to have never won a Super Bowl: the Detroit Lions.

After an 0-4 start to their 2021 season, the Lions are in last place in the NFC North. They are the only team left in the NFC without a win.

The Lions have been around since 1934, making them one of the oldest teams in the league. They came close to the Super Bowl in 1992 when Hall of Fame running back Barry Sanders made the team a worthy contender.

But they lost in the NFC Championship game that year to the Washington Football Team, 41-10. They haven’t won a playoff game since then.

By the looks of their 2021 campaign, Detroit fans might be waiting a long time before the Lions make their first Super Bowl appearance.

The Jacksonville Jaguars began their organization in 1995. They made the playoffs four out of their first five seasons, losing to the New England Patriots in the AFC Championship game in the second season.

After going 14-2 in the 1996 regular season, the Jaguars lost in the AFC title game to the Tennessee Titans.

Since 2000, the Jags have made the playoffs only three times. They remain one of only four teams in the NFL that have never even played in the Super Bowl.

With head coach Urban Meyer’s recent “bar dancing” scandal amid the team’s 0-4 start (after winning only one game last season) it doesn’t look like the Jaguars will be playing in the Super Bowl anytime soon.

The Houston Texans, another recent expansion team, began as an NFL franchise in 2002. They’ve lost four times in the playoffs in the divisional round, so they’ve yet to make it to a conference championship game.

It could be a long time before the Texans talk realistically about making it to the Super Bowl.

Last year, the Cleveland Browns went 11-5 in the regular season, losing in the divisional round of the playoffs against Kansas City Chiefs. It was only the third time the Browns had a winning season in two decades.

During an NFL record for the worst two-year stretch of any team, the Browns won only one game in two seasons, going winless in 2017.

With quarterback Baker Mayfield under center in his fourth year, the Browns have good odds of winning the Super Bowl in 2022.

Still, like the Lions, Jaguars, and Texans, the Browns have never made a Super Bowl appearance.

Last year, the Titans clinched the AFC South, going 11-5 in the regular season. They won their first two games in playoffs, eventually losing in the AFC Championship game to the Chiefs, 35-24.

Previously known as the Houston Oilers, with Hall of Famers Warren Moon and Earl Campbell, the team moved to Nashville in 1997.

The final play decided the fate of the Titans, as they were “One Yard Short” of sending the game into potential overtime.

The Titans remain a decent football team, but they just haven’t been able to win the Super Bowl.

The Atlanta Falcons went 4-12 last season. Among all the mentioned teams that have never won the Super Bowl, the Falcons were there most recently.

After their 2016 season, the Falcons lost in the Super Bowl to Brady and the Patriots after leading 28-3 into the third quarter. The Pats miraculously sent the game into overtime, and the Falcons suffered a humiliating defeat.

6 More Teams That Have Never Won the Super Bowl

Six more teams have never won the Super Bowl, including the Minnesota Vikings and the Cincinnati Bengals. The Vikings and Bengals both made it to the big game more than once.

The Vikings reached the Super Bowl four times during the 1970s, losing on every single occasion. The Bengals got there, but they lost twice to the San Francisco 49ers in the 80s.

So far this year, the Vikings are 1-3, while the Bengals are tied for first place in the AFC North.

In 1995, the Carolina Panthers began their inaugural season 7-9, going 12-4 in their second year when they won their division. They lost to the Packers in the NFC Championship game.

Seven years later, the Panthers won the NFC Championship after the 2003 season, losing to Brady and the Pats in the Super Bowl, 32-29.

The Panthers made a few playoff appearances before they reached the Super Bowl again in 2017. The team went 15-1, and QB Cam Newton was named the NFL MVP.

Still, they lost to the Denver Broncos, 24-10. (It was the final game of quarterback Peyton Manning’s career.)

Finally, we have the top three teams that never won a Super Bowl: the Los Angeles Chargers, Arizona Cardinals, and Buffalo Bills.

The Chargers appeared in only one Super Bowl, losing to the 49ers in 1995. They went 7-9 last season, but they’ve started 2021 looking like an elite football team.

Second-year quarterback Justin Herbert set statistical records in his first season, earning the AP NFL Rookie of the Year award. This year, the Chargers are among the top 10 teams to win the Super Bowl in 2022.

Next, the Arizona Cardinals have never won a Super Bowl, but they’ve started the 2021 season looking like one of the best teams in the NFL.

The team began as an athletic club in Chicago back in 1898, making it the oldest professional football team in the U.S. Eventually, they joined the NFL in 1920, moving to St. Louis in 1960.

The Cardinals relocated to Arizona for the 1988 season. The team maintains the longest championship drought among active sports teams in North America at 72 years.

They’ve been to the playoffs ten times, winning seven games, and they’ve never lost at home. Their only Super Bowl appearance came in 2009 when they lost to the Pittsburgh Steelers, 27-23.

One team that has never won a Super Bowl who is a better contender this year: the Buffalo Bills.

The Bills reached the Super Bowl in four straight years between 1991-1994, an NFL record. They lost each game.

So, like the Vikings, the Bills have been to the Super Bowl four times without winning a game. Between 2000-2016, the Bills also suffered the longest playoff drought of any major sports team in North America.

Last year, they lost to the defending Super Bowl champions, the Chiefs, in the AFC title game.

Maybe this year, things will be different.

Some of the teams have gotten pretty close. Others remain as far away from winning the Lombardi trophy as ever.

The top three teams who have never won the big game, the Chargers, Cardinals, and Bills, look like they might break their Super Bowl droughts sooner rather than later.

On this shortened list, the Bills have the best shot at winning the Super Bowl in 2022. Who knows?

Odds are they might have to do it against a man named Brady.

Top List of The Fastest Football Players In The World