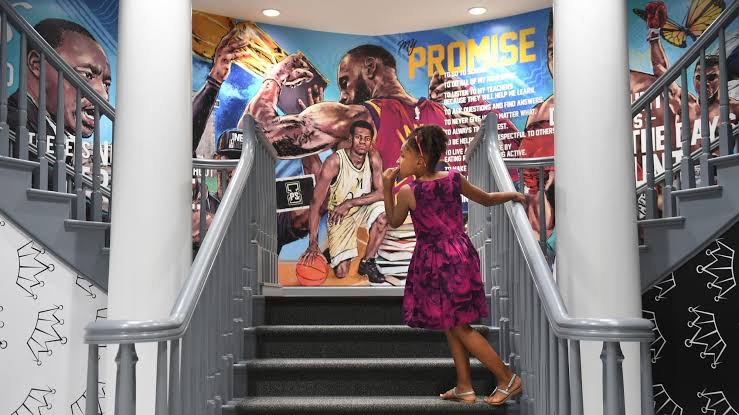 US President Donald Trump‘s latest tweet against LeBron James and CNN’s Don Lemon has caused a real uproar across America. People from different walks of life (including celebrities) have come out in hoardes to support LeBron James. Talk show hosts and analysts have been engrossed in heated debates over this topic. Trump’s tweet has also had an unexpected positive impact. The tweet has given a lot of extra publicity to LeBron James’ latest charitable venture. He opened a school in his hometown of Akron, Ohio, United States of America, last week. The school is meant for financially weak, at-risk students and LeBron James’ family will be providing $2 million to the school, in addition to the funding provided by other parties in the city. LeBron James has also offered to pay the college tuition fees for anyone who graduates from his ‘I Promise’ school. On top of that, these are the other benefits which the students of the school will receive:

All of this sounds incredible but there is a piece of mis-information doing the rounds about this school. A lot of people believe that LeBron James is singlehandedly financing the school. However, the I Promise School is a completely public school, it isn’t a private or charter school. LeBron James has a key role in defining the school’s mission and his family foundation has committed atleast $2 million annually for the school. However, the Akron Public Schools organisation will take care of the majority of the school’s operations and resources. The Cleveland Plain Dealer clarified further:

“It’s a district-owned building. The district will hire and pay the teachers and administration. Kids will ride district buses to school. And they will all eat the free breakfast and lunch the district gives all students.
I Promise will eventually cost about $8 million a year to run out of the district’s regular budget, covered mostly by shifting students, teachers and money from other schools.”

The I Promise School’s establishment could turn out to be a watershed moment when it comes to celebrities contributing to the field of education. Most celebrity forays in this field have been through the charter school movement. Charter schools are publically funded but privately run. These schools have been blamed for leeching resources away from traditional public schools and undercutting the teachers unions. The contrary view to that, states that charter schools actually do excellent work and try brand new and experimental education models as a result of the freedom they enjoy. The American state of Michigan, which boasts the most number of charter schools in the United States of America, has witnessed a steep decline in its students’ Maths and Reading Skills ranking.

The I Promise School is offering a lot of the great features of good charter schools. The school’s hours are longer than usual, it will run from 9 AM to 5 PM. The curriculum will be extremely focused on science and technology related subjects. The teachers will also have professional level training and support programmes.

So far in America, charter schools have been able to provide such features because they have had private (apparently) philanthropic support. LeBron James is forging a public path by bringing such support and facilities to a public school.

However, a lot of American writers with an expertise in the field of education don’t see it as a solution, but just another symptom of the problems plaguing the education system. Some education writers see this as a sign of the deeper problems with regards to how education is funded. According to the Washington Post’s Valerie Strauss: “That’s not how civic institutions should be run. America’s public schools should not have to depend on any wealthy individual or private entity to be sustained or improved.”

She sounds quite correct. The I Promise School is an exception to the norm when it comes to American public schools for underprivileged kids. They all suffer from severe funding shortage and one can forget about freebies such as bicycles and Chromebooks, a lot of the schools even lack enough security to protect its students. However, even if the I Promise school is not the solution to the public school problem in America, it’s definitely a step in the right direction. LeBron James is making it clear that investing in the traditional public school system is the way forward and future donors should entrust such institutions with their money.

By way of comparison, when Facebook founder and CEO Mark Zuckerberg donated $100 million for the development of Public Schools in Newark, a major chunk of the money ended up in the hands of ludicrously expensive consultants and a very small amount trickled down to the people actually doing the work. This led to an intense backlash from the community. What was envisioned as the staging ground for the education reform system, with performance based incentives for charters and teachers, turned into yet another instance of the top brass leeching away at the funds and not leaving much for the actual work. LeBron James is forging a different path by working with the public school system with a more conservative amount of funding. By starting small, LeBron James will have less managerial, financial and operational problems while still managing to create a (hopefully) successful model of the ‘celebrity dollars – public school system’ symbiosis.

Ever since the world has known about the ‘Kid from Akron’, it has expected a lot from him. LeBron James didn’t crumble down under the weight of expectations either and made bold promises, proclaiming himself King James in the process. And if the last 18 years are any indication, the King always delivers on his promise.