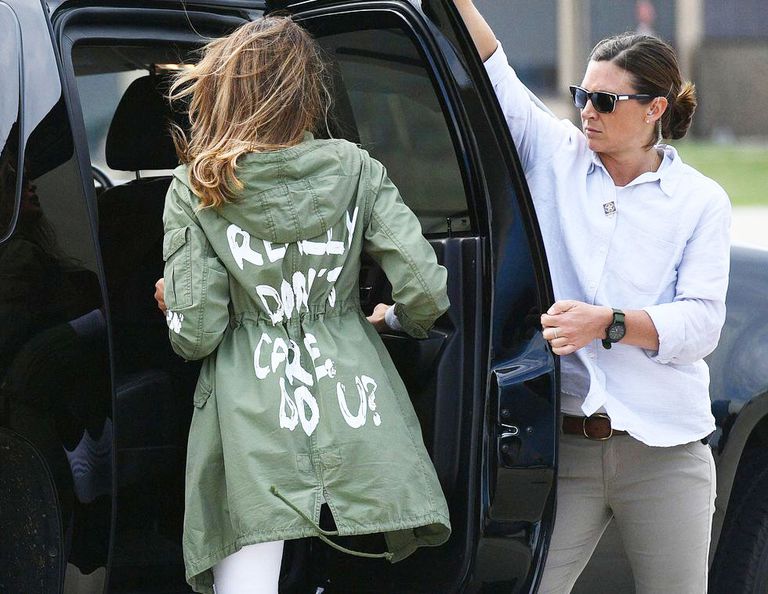 Melania Trump’s wardrobe has been a hot potato topic in the political world once again. Recently Mrs Trump was spotted visiting the Mexican immigrant’s children at their shelter in Texas. While her visit was supposed to highlight how concerned and caring she is towards these children, the message on her outfit portrayed a different image completely.
On the day of the surprise visit, Melania sported a beige coloured jacket by Dolce and Gabbana, worth $51000 USD, with the controversial message on the back – “I really don’t care, do u?”The official spokes team of the first lady of USA has been trying to convince the world that there were no hidden messages in her jacket and #itsjustajacket, people find it hard to ignore the negligence on her end. Donald Trump too jumped to her defence stating the message on Melania’s jacket was a middle finger to the false media and had nothing to with the kids. While it is not the first time Melania’s wardrobe has raised eyebrows, the cause at the core is sensitive to make it controversial.
Off lately the media has been backlashing Donald for signing the law which separated Mexican immigrant parents from their kids. The law was opposed so strongly by the residents of USA that the aforementioned bill had to be revoked within 2 days of it being signed. In between all this, Donald Trump was highly criticized for lack of sensitivity towards consequences of his actions that would affect parents of Mexican kids.
Donald Trump’s journey as president of USA is filled with waves of mixed emotions from people. He has been at the constant centre of critique for most of his actions and statements. Not only him, his entire family has been closely scrutinized and questioned about their actions. Trump has publically stated how he disliked the immigrants and how he would like to build a wall across the nation (hinting Mexico subtly) to avoid a further addition to the population of the country. In between this, Melania’s wardrobe has added another spark to the controversy.
Melania is a former fashion model and is known to choose her own outfits while not relying on any personal stylists for it. Hence the justification of her spokes team of no hidden message behind the jacket or indicating that it was as a mere stroke of bad timing rather than intentional seems to be void. Especially when in past as well her choice of outfits while representation the country has been questioned.
Another reason why I believe that there’s a secret target behind the message flashed by Melania is the fact that someone from her squad would have definitely brought the mismatch between the choice of her clothes and mission of her visit to her notice. Again proving it was a choice to wear it.
While the move comes across to be more deliberate on Melania’s end, the world is now wondering who the quote was aimed it. Unfortunately, this has taken away the attention from the greater good of the cause she was headed to.
Let’s not forget the trouble faced by the Mexican immigrants in USA and hope for things getting better soon.

12 Tips For Surviving A Political Conversation With Friends

Karunanidhi passes away at 94

Even though it could have been unintentional, it was very insensitive and irresponsible on her part to don a jacket with an ‘I-don’t-really-care’ message, especially when she was on a public visit to children in despair.
Being a public figure, she should have been more careful.