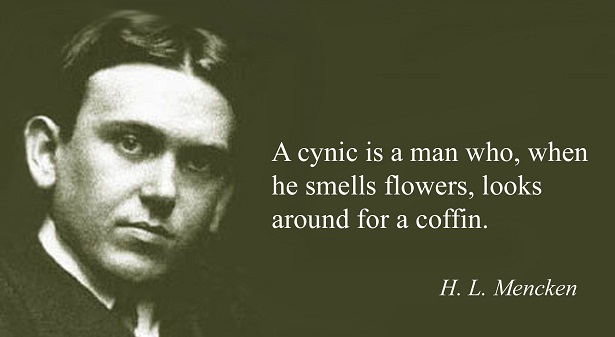 The world is full of dreamers. There are the idealists. There are the optimists who believe that every cloud has a silver lining and then there are the cynics- people who will never appreciate anything. Ever!
We all know someone who has a negative take on every damn thing in the world and who never quits criticizing. Be it jobs, politics, the Government, bureaucracy, environment, culture, religion, marriage, kids- almost everything under the sun. These are the kind of people who only see the glass as half-empty.
When you want to give away your old clothes to an orphanage, they will tell you how most NGOs are a fraud and not really helping children. When a celebrity donates to a disaster relief fund, they will say how he/she only did it as a publicity stunt. When a leader builds toilets or schools in an under-developed area, they will point out that it was done only for votes. 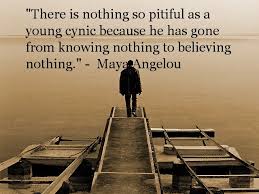 Does anybody realize how much this cynicism is undermining the social necessity of doing good as well as trivializing the importance of good deeds?
Why can one not see, that no matter what the intention was, village children had a school to go to; some orphans had clothes to wear; and maybe many lives were saved using the donations received?
There are millions of people ready to criticize at the drop of a hat and only a few thousand who want to make a difference. These are the people that carry the burden of the world on their shoulders. These are the people due to whom society still believes in humanity, in kindness and in compassion.
Yes, we know many people do something and then publicize it too. But there are many others who will help out even when nobody is watching. Irrespective of the attention these people or their activities garner, the outcome is a ray of sunshine for someone in the dark.
I believe that our ability to see the good in everything is the only trait that will save the planet from witnessing a horrible untimely apocalypse.
We have all probably heard of countries where the first page of the newspaper always portrays positive news, no matter how many bleak days the country is seeing. But if we take a look at the media in our own nation, the picture is quite ugly.
Yes, there is violence; there is corruption; there is crime and there are scams. But there is also growth; there is progress; there is innovation; there is victory; there is bravery; there is patriotism; there is love and humanity. Somehow, the moment we come across positive news, we start making a list of all the vested interests behind the incident, how a certain event is illogical or unnecessary, how a particular act is favouring a group, how it is not going to solve any problem; as if each of us were an opposition party in ourselves with an objective to oppose anything and everything that takes place. 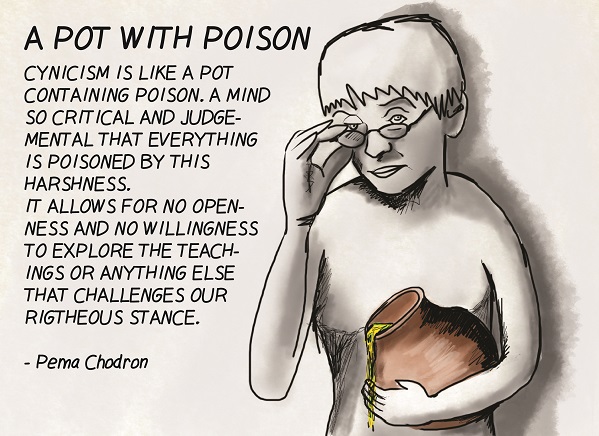 Why are we, as a nation, so focused on picking apart an incident or a person and not at all interested in appreciating and applauding?
Be it our Prime Minister, our cricketing heroes, our Bollywood superstars or the popular Businessmen; nobody is spared the media trial that follows every decision they take.
When a labourer or tea-seller donates his earnings to flood victims, he gets a pat on the back or resources to set up his own business; but if a successful entrepreneur does the same, everyone discusses how he is looking for publicity or tax exemption. Why?
In some cases the latter may be true; but is it not possible that both the individuals only wanted to help and contribute in their own way without expecting personal gains? 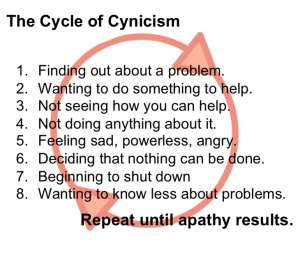 By rendering somebody’s contribution as worthless, we are in fact, discouraging people from helping. When you realize, that no matter what you do, people will not recognize your efforts; you lose the urge to do anything at all. And when you start feeling- “What’s the use? It isn’t really going to make a difference”, what does that make you? Yes- a Cynic.
Eventually the world will be full of sceptics, born out of the cynicism of others and society will come to a standstill.
I am an optimist and feel that it is only our perception that can change the way society behaves.
I don’t mean that we must turn a blind eye towards all that is bad. Debate and opposition are healthy. But let’s keep them that way and not turn them into a necessary war that must be waged against everyone. 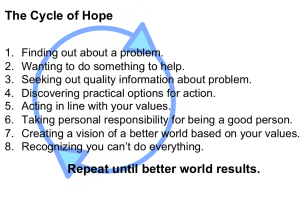 Remind yourself and others that the glass is half-full and you’ll easily be able to fill that which is empty- in the heart, the mind and in the world!