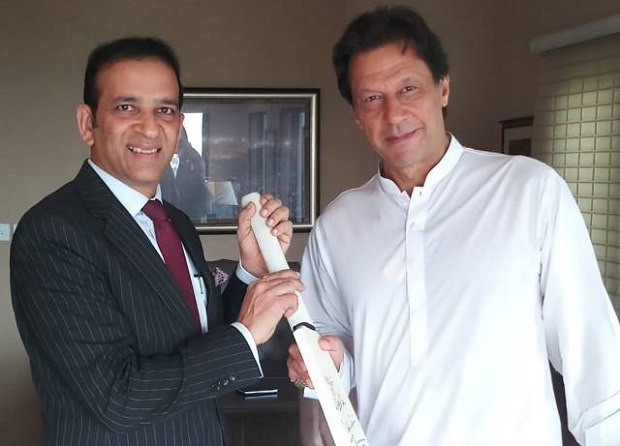 As scheduled, the media reports the meeting between India’s high commissioner, Bisaria, and Pakistan’s Prime Minister-in-waiting finally met at Imran Khan’s resident in Islamabad on Friday. The media has been talking about this since. As per the reports revealed, Bisaria congratulated Mr. Khan on his victory and initiated the conversation on the issue of cross-border terrorism and infiltration.
While this discussion Imran Khan as expected brought the “Kashmir issue” and mentioned how the human rights are being violated by the Indian forces in the valley. Just after the meeting, the Tweet popped up from Bisaria stating that they have has a good and positive discussion over the matters important to both the countries. Not only this but as a token of congratulations and following the traditions of India, Bisaria did not go empty-handed, instead he gifted Mr. Khan the cricket bat signed by the entire team of India.
Bisaria also felicitated Imran Khan on behalf od OM Narendra Modi. While the discussion was going on, Mr. Khan also called for the early resumption of the Saarc process and appealed to India to be present in the next summit that is going to be organized in Islamabad. This meeting was intended over the motto of focussing on the improvement of Indo-Pak relation. According to PTI sources, the meeting specifically focused on the matters of mutual interest. Sources then added that Khan also stressed on to the need of restarting the dialogue between the two countries on several outstanding issues including Kashmir.
After the meeting, India seems to be confident to improve the relationship between the two countries. Bisaria also added that the telephonic conversation of Khan and Narendra Modi also sparked a new light into their relationship. It was revealed that the most of the conversation between Khan and Modi was encircled around the improvement between the bonds of the two nations.
The highlight of this meeting, however, remained on Imran Khan proposing the dialogue session. He stated that both neighbors should move towards the conflict resolution through dialogues.
It seems like this meeting might string along a new thread between this new country and might knit the way to improving the vision of each of these countries in the eyes of one another.