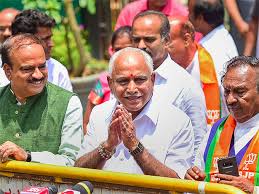 His Excellency the Governor of Karnataka has invited Sri @BSYBJP to form the government.

Sri @BSYBJP will take oath tomorrow as Chief Minister of Karnataka at 9 AM at Raj Bhavan. #CMBSY pic.twitter.com/DCSIx3APSZ
— BJP Karnataka (@BJP4Karnataka) May 16, 2018

As per the official letter, confirmation, BS Yeddyurappa will be sworn in as the new Karnataka CM at 9 am on Thursday with Karnataka Governor Valubhai Vala inviting the BJP to form the government first, ahead of the other claimant – the JDS-Congress combine. Although BSY had sought 7 Days, The governor has given the BJP 15 days to prove it has a majority in a floor test rest of the cabinet will be sworn in only after proving its majority.
One of the Ministerial candidate HD Kumaraswamy told reporters, “We have submitted the necessary documents which show that we have the numbers required to form the government. The Governor of Karnataka promised he will consider according to the Constitution.” Congress leader DK Shivakumar said that none of the elected MLAs backed out, and the alliance continues to hold the majority. Governor has assured that he will take action as per the Constitution. We have full faith in him that he will not do injustice. We have our numbers, not even a single member has moved out. We will not allow any such thing to happen”
The governor took the decision after having the consultation with former Attorney General Mukul Rohtagi. The JDS and Congress had met the governor at the Raj Bhavan in the evening when Vala had assured he will consult legal experts and consider the precedents of Goa and Manipur. The JDS-Congress combine has 117 MLAs, well clear of the magic mark. The Congress is expected to address a press conference soon. The party has previously said that it would move the Supreme Court if denied the chance to form the government first.

Things you will see in every Fauji house

It’s so depressing to learn that It has all come down to BJP or Congress these days! What about integrity and service on the real field?