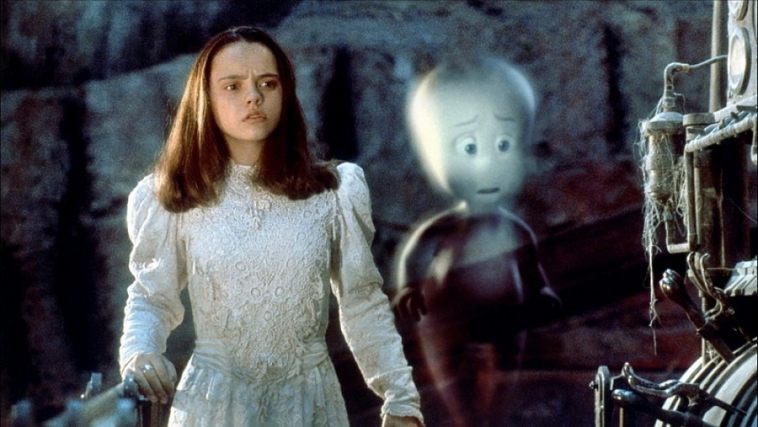 Christina Ricci is one of the most celebrated actresses of her generation and as she is also one of the few child stars to make a successful transition to adult roles, Christina Ricci has been impressing audiences and her critics with acclaimed performances since debuting in 1990’s Mermaids. The daughter of a lawyer and a former Ford model and the youngest of four children, American actress Christina Ricci was born in Santa Monica, California on February 12, 1980. Following her family’s move to New York when she was eight, Christina Ricci got her start by acting in commercials. Her big screen debut came shortly after when director Richard Benjamin cast her as Cher’s younger daughter in Mermaids. Although much attention went to Winona Ryder, who played Christina Ricci’s older sister, the young actress made enough of an impression to land more work: The following year, she starred as the morbidly precocious Wednesday Addams in the hit film adaptation of the Addams Family and it’s a very well known character, so we will not be including that in our list for you to what else is out there.

Here are Christina Ricci’s top 10 movies of all time:

The movie Sleepy Hollow is a 1999 American fantasy horror adventure film directed by Tim Burton. The film is loosely based and inspired by the 1820 short story The Legend of Sleepy Hollow by Washington Irving and stars Johnny Depp and Christina Ricci, with Miranda Richardson, Casper Van Dien, Michael Gambon, and Jeffrey Jones in supporting roles. The movie is about a police constable Ichabod Crane sent from New York City to investigate a series of wrongdoings in the village of Sleepy Hollow by a mysterious Headless Horseman. For the Academy of Science Fiction, Fantasy & Horror Films Christina Ricci won the Best Actress Award.

What the critics said: “There’s no chemistry evident between Christina Ricci and Depp” and “so it becomes virtually impossible to accept either passion or tenderness in their interaction.” Although Christina Ricci is one of the most talented acting representatives of her generation, this does not stand out as one of her better performances.” James Berardinelli, ReelViews.

Number 2: The Opposite of Sex

Another movie starring Ricci is Opposite of Sex is a 1998 American romantic comedy film written and directed by Don Roos and starring Christina Ricci, Martin Donovan and Lisa Kudrow. The Opposite of Sex was the last feature film produced by Rysher Entertainment, a company more famous for their television productions. Christina Ricci played the role of Dedee Truitt.

For its North American run, The Opposite of Sex took in film rentals of $5,881,367. The opening weekend saw a per-screen average of $20,477 for the 5 theaters showing it. According to Janet Maslin from The New York Times called it a “gleefully acerbic comedy”. Christina Ricci’s performance was heavily praised, and she even went on to received a Golden Globe nomination for Best Actress in a Comedy. Roger Ebert especially enjoyed the voice-over narration supplied in-character by Christina Ricci, calling it “refreshing” and comparing it to Mystery Science Theater 3000. All in all, the film scored a whopping 80% on the Rotten Tomatoes review site.

The movie Casper is a 1995 American family comedy fantasy film starring Christina Ricci, Bill Pullman, Eric Idle, Cathy Moriarty, and Amy Brenneman. This movie is based on the Casper the Friendly Ghost comic books and animated cartoons. The cute ghosts featured in the film were created through computer-generated imagery. Christina Ricci played the role of Kathleen “Kat” Harvey who is Dr. James Harvey’s 13-year-old daughter and Casper’s love interest. Since Kat has lost her mother she really wants to make a friend.

The movie Casper opened at #1 over the Memorial Day weekend and grossed $16.8 million over its first three days from 2,714 theaters, averaging around $6,205 per theater.
Casper played throughout the summer, ending up with a final gross of $100.3 million in North America, and an additional $187.6 million internationally, for a total worldwide gross of $287.9 million, far beyond and more exceeding its $55 million budget and becoming a complete commercial success, which is why you should watch it asap!
After the release of his movie Casper, Simon Wells co-wrote a screenplay for Casper 2, in which he was set to direct. However, Universal Pictures had to cancel the sequel after getting disappointing sales from the direct-to-video Casper films and the hesitation of Christina Ricci in 2002.

Critics said: “Without the talent of Christina Ricci, Casper would have been a truly barren motion picture. As it is, it’s still not very good.” James Berardinelli, ReelViews.

The movie Monster is based on the life of Aileen Wuornos, a serial killer who’s life was very interesting with stirring events that led up the killings. Daytona Beach prostitute who became a serial killer due to the events of her life.This 2003 drama film about Aileen Wuornos, a serial killer who used her gun as a defensive weapon, found guilty and executed in Florida in 2002 for taking six men’s lives in the late 1980s and early 1990s. The role of Aileen Wuornos was played by Charlize Theron, and her fictionalized lover, Selby Wall, was played by Christina Ricci. Selby was said to be Aileens one true love and kind of knew about her methods of procuring money but went to testify against her former girlfriend. Patty Jenkins wrote and directed the film. Theron received overwhelming critical acclaim and won seventeen awards for her portrayal of Aileen the serial killer including the Academy Award for Best Actress, Screen Actors Guild Awards for Outstanding Lead Actress and a Golden Globe Award for Best Actress!
Although Charlize was the focus, critics said: “Christina Ricci finds the correct note for Selby Wall” and “so correct some critics have mistaken it for bad acting”.. “ when in fact it is sublime acting in its portrayal of a bad actor.” Roger Ebert, Chicago Sun-Times, and we have to agree!

The plot of this movie follows A Wilhern who has an affair with one of the servants but is talked out of marrying her by his disapproving family. With a broken heart, the servant throws herself off a cliff, and her embittered and vengeful witch mother played by Michael Feast then curses the Wilherns so that the next daughter who gets born into an affluent family will have the face of a pig. For five generations, the Wilherns produce only sons, until the birth of one Penelope played by Christina Ricci, much to the distress of her mother Jessica (Catherine O’Hara).

The film received mixed reviews from critics. Review aggregator website Rotten Tomatoes gives the film 53% based on 127 reviews. The site’s consensus stated that “Though Penelope has a charming cast and an appealing message” they continued with “ it ultimately suffers from faulty narrative and sloppy direction.” Metacritic gives the film a weighted average rating of 48%, based on 29 reviews, indicating mixed or average reviews.

Number 6: Now and Then

This is one of Christina Ricci’s classic cult films. The film was released on October 20, 1995, and was critically panned. Its plot was considered overly familiar, sitcom like, and too similar to Stand by Me. Based on reviews collected by Rotten Tomatoes, it received a 28% approval rating by critics, with an average score of 4.8/10, based on 18 reviews. Despite the critical response, it was acclaimed by audiences and has garnered a large cult following since its release.

The movie Mermaids is a 1990 American comedy-drama film. It was directed by Richard Benjamin and starred Cher, Bob Hoskins, Winona Ryder, and Christina Ricci. Did you know that this movie was Christina Ricci’s first film role? The film is based and adapted from the 1986 novel of the same title written by Patty Dann. The film was shot in and around the town of Ipswich, Massachusetts and Pawtucket, Rhode Island. Christina Ricci played the role of Kate Flax.

The film Mermaids currently holds a good rating of 73% on Rotten Tomatoes and the reviews are largely positive reviews.
According to Vincent Canby of The New York Times “Mermaids, adapted by the English writer June Roberts from the novel by Patty Dann” he continued “is a terribly gentle if wisecracking comedy about the serious business of growing up.”

The plot of the Pecker follows a talented photographer, who enjoys snapping photos of his satirical, perverted Baltimore neighborhood and also photos of his wacky family who gets dragged into a world of pretentious artists from New York City and then finds newfound fame.

The movie Pecker is a 1998 American comedy-drama film written and directed by John Waters. Like all of his films, it was filmed and set in Baltimore; this film was set in the Hampden neighborhood.

The critical reaction to the movie Pecker was mixed but leaned more toward the positive. It has a 52% on Rotten Tomatoes based on 44 reviews. It holds a 66 out of 100 based on 24 reviews on Metacritic. Whereas Peter Stack of the San Francisco Chronicle wrote that Pecker is “never truly funny, but it’s an amusing novelty” and “gaining strength from smart characterizations and sly cogency about the way people are exploited under the limelight of celebrity.”

The plot of Anything Else follows Jerry Falk who learns a lesson the hard way when he falls head over heels in love with a beautiful but flighty girl, Amanda.
The movie Anything Else is a 2003 American romantic comedy film written and directed by Woody Allen, produced by his sister Letty Aronson, and starring Christina Ricci, Jason Biggs, Allen, Stockard Channing, Danny DeVito, Jimmy Fallon. The film was shown as the opening night selection at the 60th annual Venice International Film Festival.

Leonard Maltin, in his movie and video guide, gave the film a “BOMB” rating (the only Allen-directed film he ever rated BOMB), and called it “Allen’s all-time worst”.
However, in August 2009, it was cited by Quentin Tarantino as one of his favorite 20 films since 1992, when his career as a filmmaker began.

Black Snake Moan is a movie from 2006. This American drama film is written and also directed by Craig Brewer. It stars Christina Ricci, Justin Timberlake, Samuel L. Jackson, and Kim Richards. The plot of this movie focuses on a Mississippi bluesman who holds a troubled local woman captive in his house in order to attempt to cure her of her nymphomania, he finds her severely beaten on the side of a road.

On Rotten Tomatoes, the film has an approval rating of 66% based on 157 reviews, with an average rating of 6.4/10. Critics stated “Uninhibited performances, skillful direction, and a killer blues soundtrack” goes on to “ elevate Black Snake Moan beyond its outlandish premise.”
Filmmaker Kevin Smith, filling in for Roger Ebert, described the film as the best of the year thus far. Smith praised Christina Ricci and Jackson, saying this was Christina Ricci’s best performance and Jackson’s best performance since Pulp Fiction (1994). Matt Glasby of Film4, however, awarded the film only 1 star out of 5, calling it a “pressure-cooked mess” that was “bad enough to make gums bleed”.

According to critics, the movie is “Humid and overwrought, with Christina Ricci working at fever pitch and Jackson bringing fire, brimstone and some passable blues licks to the equation, Black Snake Moan is no polite little indie thing, and certainly no formulaic studio exercise.” Steven Rea, Philadelphia Inquirer.

Are you a fan of Wednesday Addams? See costume ideas for Halloween here.

5 Surprising Benefits of an Air Mattress