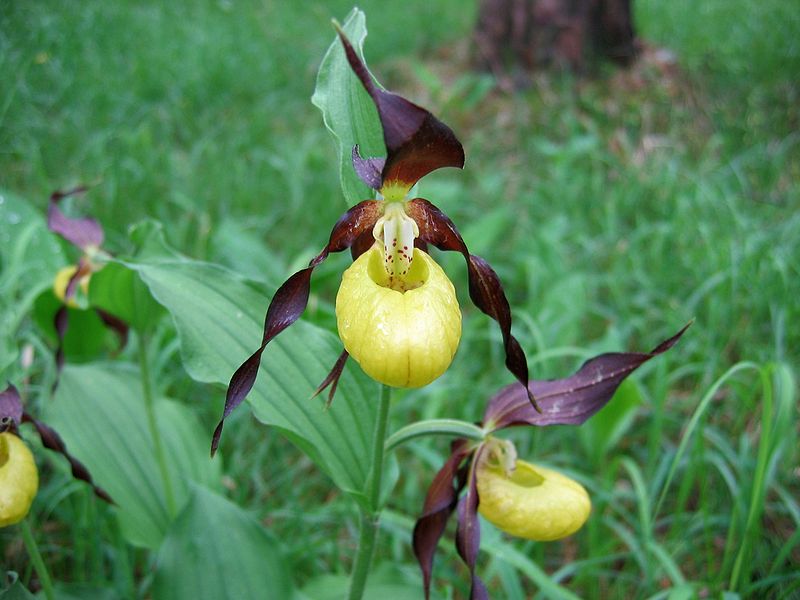 Ever wondered what the rarest yellow flowers look like? Read our list of yellow flowers from all over the world that are unique looking and slightly uncommon.

The color of the sun, yellow is the shade that literally can brighten up someone’s day! Whether they’re bright or subtle, yellow flowers are sure to represent friendship and joy, and this stimulating color enhances any floral collection it’s added to.

Associated with joy, yellow is the best color to create a lively atmosphere and promote positive feelings! Add yellow flowers in sunshine-inspired shades to brighten up any room. If your a fan of the big and bold shades or instead the small and subtle shades, there are many unique yellow flowers for creating the perfect arrangement.

Yellow Flowers: Rarest In The World

Around 3/4th of the flower is yellow and the remaining part is in the color purple. These yellow flowers have a bottom petal that forms a hollowed-out area that resembles a shoe, thus its name. They are so rare that botanists thought them extinct until 1917 when one plant was discovered in England growing on a golf course. The yellow and purple lady slipper is now protected by the Wildlife and Countryside Act of 1981. Smugglers have attempted to dig it up and have even cut away part of its flowers. Today, only six blooms remain.
The rare yellow and purple lady slippers are also one of the most expensive yellow flowers in the world and rightfully protected by law in London.

The Dancing Lady Orchids are named after their distinctively shaped yellow flowers. If you notice, the small upper part and the large bottom of the flower looks like a dancing lady. The oncidium plants grow in tropical and subtropical regions of South America, Central America, and Mexico. There are dozens of these flowers growing in each branch of the plant. The flowers come in a variety of colors including pink, white, yellow and red.

Rothschild’s Slipper orchid is one of the rarest yellow flowers in the world and characterized by its red stripes and long side petals. These yellow flowers can ONLY be found in the rainforests of Mount Kinabalu in northern Borneo, a large Asian island. Its growth range is even more limited by elevation, growing only between 1,640 and 3,930 feet above sea level. Not only are these yellows flowers rare, but one can take up to 15 years to blossom. As it is so difficult to find, this orchid species has a very high value on the black market, sold for as much as $5,000 per stem. This high cost makes them a target for smugglers which further threatens its already vulnerable existence.

The Franklin tree flower belongs to the tea family but is the only one of its kind. The plant produces a 5-petalled, white flower with a bright yellow center. It is native to the Altamaha River valley in Georgia, a southeastern US state. The plant was first discovered in 1765. It was named after Benjamin Franklin and published in a 1785 catalog of North American trees and shrubs. The Franklin tree flower is now an extremely popular garden plant but unfortunately has been extinct in the wild since the early 1800s. Its extinction may have been caused by a fungal disease introduced by the cotton crops, though that is only a theory. Today, the existing plants descended from the seeds collected in the 1700s.

Represented as exceedingly rare since 1884, the Parrot’s Beak flower is believed to be extinct in the wild, though some individuals believe it may still be alive. Native to the Canary Islands, these yellow flowers are believed to have been originally pollinated by sunbirds which unfortunately have long gone extinct. Failed experiments have been done to see if the flowers could have found new pollinators but, as of 2008, none of these tests have been successful. For all the efforts made to take this one back home, the Parrot’s Beak flower is surely one of the rarest yellow flowers in the world.

The exotic swaddle babies orchid flowers are native to Colombian Andes of South America. These flowers have an opening in their upper parts and on the inside look like they are a swaddled baby. The flowers also have a hinged lip. These yellow flowers bloom in summer. The large waxy flowers grow 10 cm across and they are very fragrant.
Like the unusual shape the pollination mechanism of anguloa uniflora plant is also interesting. When a pollinating insect enters the flower to drink the nectar, its shoved against the column of the flower where pollen is located. This is the trick used by anguloa uniflora orchid for pollination.

Birds of Paradise definitely sounds like a confusing name because the name if given to both the bird and to these yellow flowers.

A mature bird of paradise plant blooms from May through September. Upon blooming, each of these flowers has three, upright, orange-colored sepals and three, horizontal, blue, inner sepals. Sepals are a leaf-shaped structure found in flowering plants, or angiosperms.

The plant also has long, green leaves. Altogether, this flower resembles a flying, bird of paradise, one of the most colorful birds in the world.

Bird of paradise grows well in the outdoors. It needs full sunshine. Once the flowers fade away, you should cut back the stems to encourage next level of blooming.

Also known as Hyacinthus orientalis, this ball-shaped cluster of flowers is seen as a gentle and romantic spring flower. The bright color and unique shape of the Dutch hyacinth are sure to turn heads if planted in your garden.

Also known as Craspedia globosa or Billy Buttons, these round flowers can grow to the size of a tennis ball, making them a unique addition to any traditional arrangement. Give craspedia as a get-well-soon gift as the flower represents good health!

These sturdy, daisy-like yellow flowers add a bold touch of bright yellow to any bouquet. Rudbeckia hirta, also known by its nickname Black-Eyed Susan, this is a North American flowering plant in the sunflower family, native to Eastern and Central North America and naturalized in the Western part of the continent as well as in China.

More commonly called a carnation, this bloom is very different than the one in bouquets and given commonly as gifts. It has only 4 small thin petals and will only grow a few inches in height (so cute). Plant it in full sun or partial shade. It needs moist and well-drained soil.

Hyacinths are on our list of unique yellow flowers because these ones come with a unique scent. Their flower meanings are specific to their colors. Yellow hyacinths represent jealousy. Ooh!

The sunsprite is probably one among the most beautiful yellow roses in the world. The striking depth of the yellow color of this rose lasts throughout its lifetime. The strong, sweet fragrance is another great attraction of the Sunsprite rose. It can be a perfect addition to your cutting garden.

The Sunsprite Rose will grow up to a height of 2.4 feet. It can be planted on the ground or in a flowerpot. The bright, yellow blooms normally have 25-30 petals. Luckily, they are saturated with intense, sweet fragrance.

The use of yellow roses has been traced back to the Victorian era, when the flowers were arranged in a particular way to convey secret messages. These arrangements are called Tussie-Mussies and it is a tradition that still lives today.

The Honey Perfume is an intense cluster-flowered rose. This rose bears large clusters of gorgeous apricot yellow flowers. Besides its beautiful appearance, honey perfume also has a strong, spicy fragrance. It blooms only between spring to fall. Each blossom has 25 to 30 petals. The honey perfume plant has dark green foliage making each flower of this plant look more attractive and shining.

The Western skunk cabbage is named after the skunky smell produced by its flowers. This plant grows in swamps and woodlands of Alaska, California, Idaho, Washington, Montana and Oregon. The Western skunk cabbage bloom in early spring and winter. The rod shaped flowers have bright yellow color. They grow to a height of 40 cm. The skunky smell of this plant attracts scavenging flies as pollinators.

Stapelia gigantea are beautiful carrion yellow flowers that smells like rotten flesh. The starry pale yellow colored flowers resemble starfish. It is also called as African starfish, grows in tropical regions of Southeastern Africa. The distinctive shape in addition to rotting flesh like smell attracts pollinating insects. The plant blooms in mind-summer. The unpleasant smell of stapelia giganteas is very intense and can be recognized from long distances.

The evening primrose plant is cultivated for its oil and edible roots. The evening primrose oil contains numerous essential fatty acids that is great for good health. The plant is native to the Americas with 145 different types of primroses in total and aptly named so because these yellow flowers only bloom or open at night.

The evening primrose plant grows 3 to 5 feet in height. Its stem is stout and soft-hairy. The plant blooms between July and August. The bright yellow colored flowers bloom only at night and closed up early in the morning. The flowers are also strongly scented during the night.

The meaning of flowers is a thing of beauty and has been used throughout history as part of different rich cultures and traditions. The ancient Mayan civilization, for instance, regarded yellow flowers in general as a symbol of abundance.

In Eastern parts of the world, such as Japan, the color yellow is deemed sacred and worthy of royalty. This belief even extends to yellow flowers as well.

But there is a notion that the French see yellow as a color of jealousy. While this could come in handy if you want to subtly send your girlfriend this type of message, you may want to think twice first about handing over a bouquet of yellow flowers to someone from France.

Lastly the meanings of yellow flowers in Mexico, especially marigolds, are only used to honor the dead.

What are the names of yellow flowers?

What tree has yellow flowers?

The Golden Chain Tree has yellow flowers. The flower’s strands are made up of many small pea flowers and they look like wisteria blooms.

8 Things Most Women Don’t Know About Their Bodies