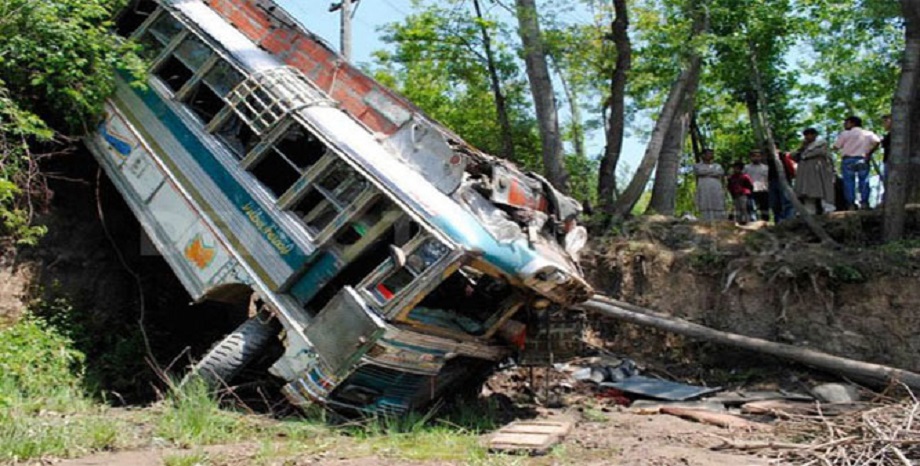 Why road accidents did not stop in Jammu and Kashmir  Irrespective of increase in the density of roads
Roads are considered as an important part for the development of the country. Roads provide resources for the growth of the economy, education, infrastructure and many other things of a country or state. What economic, educational, structural development had taken place in a state depends upon its structure of roads. More road connectivity more development and fewer roads less stable will be the condition of its economy. United States of America (USA) has the largest road connectivity in the world. India is in the second position in case of road connectivity.
The Jammu and Kashmir state has a good tourism scope. The tourism sector depends on the condition of good and sophisticated roads. Which should be easy to travel? There are many places which attract tourist not from the country but also from different countries. Since a number of beautiful tourist destinations in Kashmir Gulmarg, Pahalgam, Verinag, Aherbal and Sonamarg have been connected by good roads. But the important fact is to make these roads wider. Because in summer season when there is a huge rush of tourists in these tourist destinations several tourists die due to heavy flow of traffic in these areas Also due to extreme climatic weather conditions in Jammu and Kashmir, there are higher chances of landslides on these roads especially on the national highway which connects Jammu(Winter capital of State ) to Srinagar(Summer capital of the state).during these days the national highways and also the roads which connect to these tourist destinations get blocked due to heavy snowfall and rains.
Jammu and Kashmir is the fifth largest state in terms of road connectivity. Being a mountainous region of India, its roads are most dangerous, which makes them count in the list of most difficult roads to drive on. Although most far-flung roads are connected through roads but as long as today’s fast world is concerned. Majority of the roads are not in a good condition. A small amount of rain and snow on these roads leaves not only far-flung areas disconnected from the district headquarters but also the people living near villages which are close to district headquarters find it difficult to read their headquarters.
The current scenario and conditions of roads are so much danger that even pedestrians find it difficult to walk on them. The total length of roads in the state is 49716 km. Due to overloading traffic jamming on these roads several accidents occur daily.
Jammu and Kashmir have also the lowest density of roads amongst the other states of India. Despite the increase in roads in the state the number of vehicles had grown many folds.
According to official figures, the total number of vehicles registered as of March 2018 in Jammu and Kashmir State is1657433. Most registration of vehicles at the beginning of this year was from Jammu division of state which is about 9.97 lakh vehicles. According to a Report by the Associated Chamber of Commerce and Industry the growth rate of road density of other neighbouring states is very high as compared to Jammu and Kashmir. The density of roads in the state is low 20 per cent while it is about 108.5 per cent increase in Himachal Pradesh in the same year. The road density is highest in Kerala with 375kms per 100kms and the least is in Jammu and Kashmir with only 10kms per 100 kms. The average density overall India is 75kms.
According to Ministry of Roads Transport and highways on an average, the Jammu and Kashmir state ranks second across India in the tally of road accidents per 10,000 vehicles with an average of over 900 deaths every year. Only two states Sikkim and Madhya Pradesh have this figure highest than the state of Jammu and Kashmir.

According to official figures from the website of Jammu and Kashmir Traffic police the district which leads in the number of accidents is Jammu and most number of deaths which occur highest in the state is also Jammu. Most of the fatal accidents also occur in Jammu district of the Jammu and Kashmir state. The Chenab valley in the Jammu region, particularly Doda district, with tough terrain has witnessed a steep increase in road accidents.
The district which has the lowest number of accidents in the state is the southern hilly district of Shopian. The deaths and fatal accidents in this district are also very low.
Main Causes of road accidents in Jammu and Kashmir
The first and foremost cause of death in road accidents in the state is the violation of traffic rules and regulations. Driving without licences zig-zag driving are also other notable causes.
A House committee under the chairmanship of MLA Kulgam Mohammad Yousuf Tarigami was set up in 2012 to study the kind of accidents and suggest recommendations to control them. The committee came up with a few recommendations for the traffic, transport, R&B Departments and other agencies in order to curb road accidents in Jammu And Kashmir State. But after many years passing its recommendations were not implemented by the government to prevent road accidents.
The second reason for accidents is the increase in the number of vehicles.
According to sources, other reasons for accidents are providing licences to minors which are not eligible for licences. The minors are provided licences on recommendations and these minors are untrained and they get licences without the mandatory driving tests.
In order to improve curb road accidents following measures should be taken government should strictly implement traffic laws on roads and should ensure that no traffic law should be violated at any cost. The conditions of roads particularly of rural areas should be improved and turning the Kuccha roads with modern macadamized roads. The government should take steps to make the roads wider which will help in easy movement of roads. Because of the geography of the state, this season is of most harsh and difficult due to severe winter. Heavy rain and snowfall can occur at any time any place in Jammu and Kashmir, particularly in Kashmir and Ladakh region. These two divisions are more prone to heavy snowfall during this season because of their geographical features. The machinery for clearing of the roads in these two divisions should be on their toes.
Since most of the accidents occur on National Highway in the state so arrangements of adequate medical facilities should be ensured on these roads. Also, ample arrangement of medical facilities should be ensured on all roads in the state, so that the persons affected by the road accidents get benefit from speedy and effective trauma care and management. Providing first aid to the affected person at the site of the accident and make arrangements to take him nearby hospital is most important. The hospitals near the roads should be equipped with essential trauma care equipments and should ensure effective rehabilitation.
Awareness about road safety and raise awareness among the common masses about the traffic laws can help us to prevent traffic accidents and deaths.
previous post