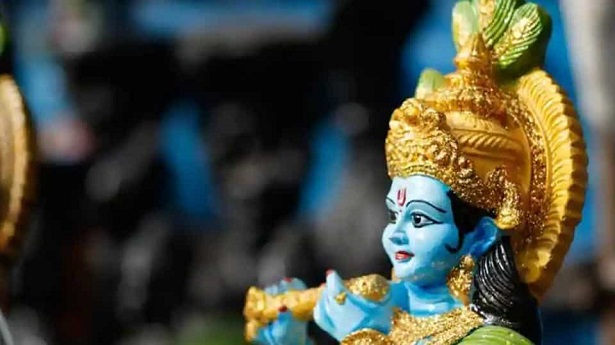 In Hindu Grantha’s, it has been said that the birth of Lord Krishna took place at Rohini Nakshatra as eighth son of Devaki and Vasudeva. He was given birth in jail where his maternal uncle, Kansa kept his parents as captives since Narada had made predictions that Kansa would be killed from the hands of Devaki’s son. Krishna was saved by getting exchanged with a cowherd daughter. Krishna is believed to be the eight incarnation of Vishnu. While Krishna was taken out of the cell, it is said that all the locks and doors opened automatically while the guards feel asleep until the time Vasudeva returned. Even Yamuna, famous holy river, helped Vasudeva cross the river to reach Braj where the Lord was kept beside Jashoda while she was sleeping.
Krishna was raised in a cowherd family where all the other villagers loved him due to innocence and spiritual aura he possessed. His friends included cowherd children, milkmaids and cows. Krishna’s love for his mother has been narrated in many tales that shows great example of child’s pure love. Krishna is famous for teasing milkmaids of Vrindavan where he stole curd and butter from their earthen pots.  All these facts must be known to everybody, but there are few lesser known facts about the Lord which are given below.

‘RAJA PARBA’ – The Most Unique Festival Of Odisha Celebrating Womanhood