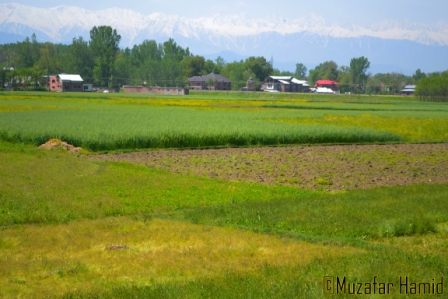 Srinagar, 29 July 2018:- Kulgam district lies in the southern part of the state of Jammu and Kashmir. It is about 70 km from  Srinagar. About 80 percent of people in the district are dependent on agriculture for their livelihood.
There are mainly two parts of the Kulgam: in upper areas occupation of most of the people is horticulture and in lower areas, most people grow rice. Land in the lower parts of the district is most suitable for paddy plantation. The villages namely Wanpoh, Qazigund, Qaimoh, Khudwani and Mir Bazar, Redwani, Tolinowpora, Bogund are the chief producers of rice. Though in some villages of upper Kulgam about 30 percent of the land is still under cultivation of rice most of the people in these villages have turned their land into horticulture, particularly apple orchards. Presently the district has 265villages.


Majority of the people in the district think that growing paddy is not lucrative enough. They say that they can hardly meet the ends of their families on the meager production of their paddy crops.

“We are a family of six members and have an orchard on a piece of seven marls of land. The production of our orchard is about 250 to 300 boxes of apple per year, before that we had production of about one to two quintal of rice from the same land, which was not sufficient for our family, so we decided to convert the paddy land into horticulture land,” said Mohammad Yusuf Rather, an apple orchard owner. 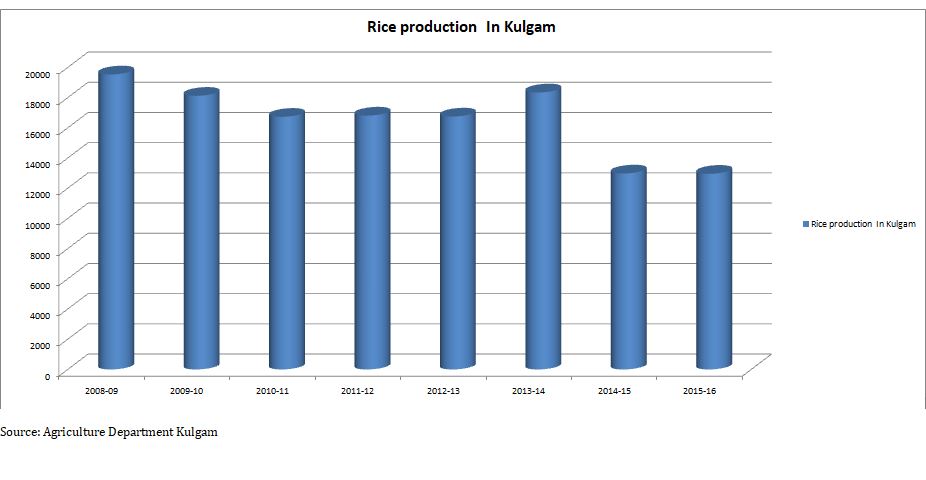 According to locals to put from the apple production has changed the minds of farmers and lured them to fruit growing.
Most of the agriculture fields are located in the southern parts of the district. Kadwani, Qaimoh, Qazigund, Wanpoh and Mir Bazar are the main paddy growing villages on that side.
In recent years the lower parts of Qaimoh had also moved to horticulture to grow apple trees on their lands.”We are not able to irrigate our lands due to unavailability of water in the months of April since the growing of Paddy crops in the area begins from the month of 20 April and remains till the end of May 20. Paddy crops are harvested in the month of October,” said a farmer Mohammad Shafi Bhat.
The state of Jammu and Kashmir annually imports about 89000 quintals of rice from the other states of India. Most of the rice is imported from Punjab.


Another reason for diminishing paddy lands is its use for commercial purposes. Brick kilns and a large number of private schools have been constructed on these paddy fields.
According to Section 133-A of the Jammu and Kashmir Land Revenue Act, SVT,1996 clearly states, “ No land which grows or has been growing shali  (paddy) crop, vegetables or saffron lulies shall be used for any(other) purpose without permission in writing of revenue minister.
Most of the paddy crop in the upper areas of the district does not ripe well and also does not yield enough quantity of rice required for the livelihood purposes of the farmers, therefore increasing the number of farmers are adopting apple plantation. According to the sources, the horticulture department is providing apple trees to the farmers and is also teaching them techniques to grow more and more fruit on the farmland.

According to the sources people are building big shopping malls, residential houses and buildings to be given on rent to big companies on the agricultural land. Setting up of mobile towers of different mobile service providers is a new trend. All this has led to a decrease in the quantity of rice produced per year in the district.

“We are providing the farmer’s high qualities of rice to increase the rice production on the available land. That is the reason that due to so much conversion of paddy land into apple land. We only import 24 percent of rice,” Ahmad further added.
As per Agriculture Department of Kulgam District, several schemes like Rashtriya Krishi Vikas Yojna (RKVY), National Food Security Mission (NFSM) etc are being run for the farmers to motivate them to retain their land and cultivate paddy on their land.


“Paddy land was much better than horticulture land because the investment on farmland was less than what is on horticulture like apple orchards. There is much risk in apple land than paddy land,” said Mohammad Ahsan Bhat, a local farmer in Kulgam.

Lack of knowledge about new trends and facilities is also responsible for the dismal situation. Farmers are not well acquainted with the latest farming techniques, though, some advanced techniques are being used for tilling of land but other traditional practices like using cow dung cakes instead of adequate fertilizers also continues. No soil testing is done to check the suitability of the crop. Due to lack of adequate knowledge of these techniques, the farmers of the district and whole valley are behind the production of rice to the rest of the country.

How To Reduce Stress During Your Menstrual Cycle

It’s amazing to be compared to Fawad Khan: Ishwak Singh