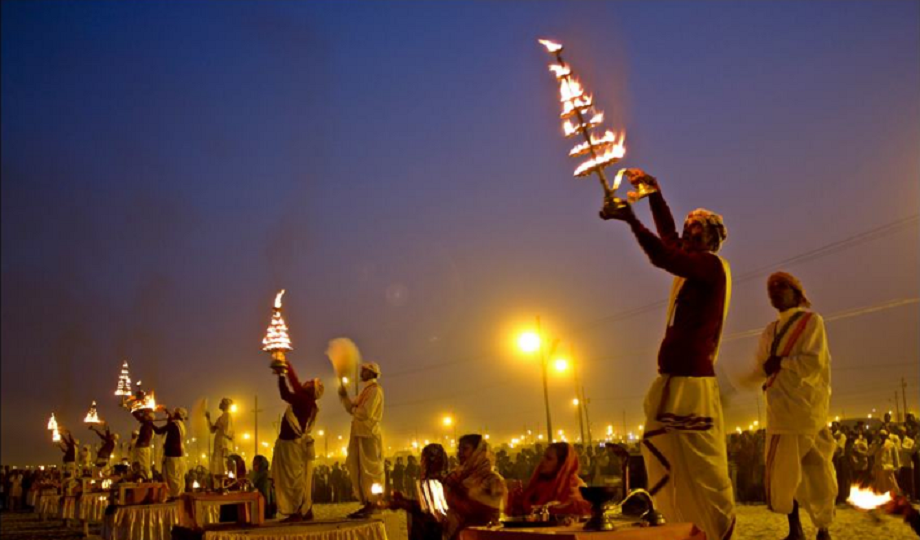 Every Indian Festival has a ritual attached to it and people celebrate the same with much enthusiasm and zeal. Kumbh mela is not an exception to strong scientific and holy reasons along with robust historical background that had made it customary to be celebrated since many ages.
Every time, the Kumbh Mela of Prayagraj have proved to be an experience for the travellers that goes far above the realm of traditional beliefs and religions. Having a mere sight of millions of pilgrimage and devotees seeking for holy blessing will give you a notion of cultural diversity and strong Hindu beliefs. This festival has also been declared as Intangible Cultural Heritage of Humanity in the year 2017 by UNESCO World Heritage Site and thus many international travellers have started witnessing this cultural event in a gigantic scale.
The dates for this grand Indian festival are determined according to planetary positions and scientific method. It is when Jupiter (Brihaspati) enters into an astrological symbol Taurus (Vrishabha) and coincides with Sun (Surya) along with Moon (Chandra) being in Capricorn (Makara). The changes among these planetary positions affects air and water on earth that results in bringing positive atmosphere in few holy places like Prayagraj. Being present at that city will simply enlighten your soul, mind and body and if you further take a dip in holy water of Ganges at that place, it is believed that not only you get a physical cleansing, but also will get an emotionally stress-free life in upcoming years

Kumbh Mela takes place every 12 years and in between, there are Ardh Kumbh Melas taking place every six years. The significance of theses dates is originated way back to the era when Hindu Gods (Devas) and Demons (Asuras) were involved in a battle for their glory on earth. Sage Durvasa was offended by Lord Indra (the king of all Gods) that resulted Demigods losing their power due to Sage’s verdict. All the Demigods went to Lord Vishnu, seeking help who made an agreement with demons for churning the oceans milk for obtaining the juice of immortality form the ocean itself.
On receiving this juice (Amritras), Vishnu tactfully gave that juice to Garud to be taken back from where it was brought i.e. heaven. On his way, Garuda was attacked by Demons and the fought between them concluded for 12 days meaning 12 human years on earth. To keep the juice secure, Garuda was forced to place it in the Kumbh of Prayagraj, Nashik, Ujjain and Haridwar. Since then, every 12th year, the Hindus organises the victory of Gods at all these destinations.

Reasons why you must join this Great Grand festival this year

It is acclaimed as one of the major internationally acclaimed festival

The Kumbh Mela reflects religious faith intensity that can produce massive number of followers, and the number being increased each time. Whether the visitor is Hindu or of any other religion, whether young or old, whether a male or a female, they all come unitedly to take a sacred dip in the holy water of Ganges. They all worship Ganges as an almighty that washes away human sins which gets dissolved in the river water. Even the water has always remained amazed due to sheer magnitude during the event and planetary position effects. Many international visitors plan their visit to India during the times when Kumbh Mela is organised to witness the amazing sight of massive gathering in which even a pinhole sized space becomes difficult to be found sometimes.

Kumbh Mela witnesses biggest human gathering on earth. In the year 1977, a surprising gathering of 15 million people was recorded during the event. This reading rose to 29 million in 1989 and presently, it is estimated that in 2019, this reading will cross over 60-80 million. The gathering is so huge that makes it very difficult to note down who attended this Mela and from which part of the world to pay homage to almighty Ganges.

Make a wish while you take a dip in holy water

As per ancient Hindu Purans (Holy book of Hindu Mythology), Kumbh Mela is the only place organised at a specific time period on the earth where you can get rid of your sins and free yourself from death and rebirth cycle. It is here where you can make a wish while taking a dip in holy water of River Ganga, praying for Nirvana and her blessings. It is also said that lighting a diya during the evening time and if it floats in the river water, making a wish usually comes true.

Experience days in a tent

Although many hotels are available for you to stay at Prayagraj, the best is to stay at the tents along the river side. This experience will definitely provide you with a feeling and insight into the living style of rishis and sadhus along with giving yourself an opportunity to get to know more about Hindu culture and religion, significance of Kumbh Mela, and how you can keep up your awakened religiousness even after leaving the place and returning back to usual lives.

The main reason behind visiting Kumbh Mela is not limited to envisage mass gathering or making a wish at the holy river, but also taking a sacred bath. During the time period of one and a half months, the place where the Mela is continued remains auspicious in which few days are considered as more sacred and royal among all other days. On these days, Naga Sadhus or naked priests can be seen who wears nothing but a single piece of cloth to cover their body part who takes part in holy parade and bath. Except for the time period of Kumbh Mela, they usually remain hidden and unaware of worldly affairs. The new moon day is taken as one of the most sacred days during which these Sadhus gather near the river bank much before the sunrise to take their dip at the first glance of sunrise.

Prayagraj is also famous among international travellers due to the sight where three sacred rivers meet each other that has been given a name in itself, ‘Sangam’. Rivers Yamuna, Ganga and Saraswati meets at one point and that place became holiest sites for Hindus. Apart from it, you can also get indulged in serene water rides to experience ferry or a boat ride that will surely soothe you after a visit to massive pilgrimage occasion. The Inland Waterways Authority of India organises a ferry ride that takes you closer to Sangam point at Yamuna river.
Do not miss to envisage one of the ancient Hindu festivals that has remained an oldest tradition for centuries. This cultural heritage which is also considered as one of the popular tourist destinations in India would give you an opportunity to relive religious practices and age-old traditions.

India's First Biofuel Flight Might take off from Dehradun to Delhi!