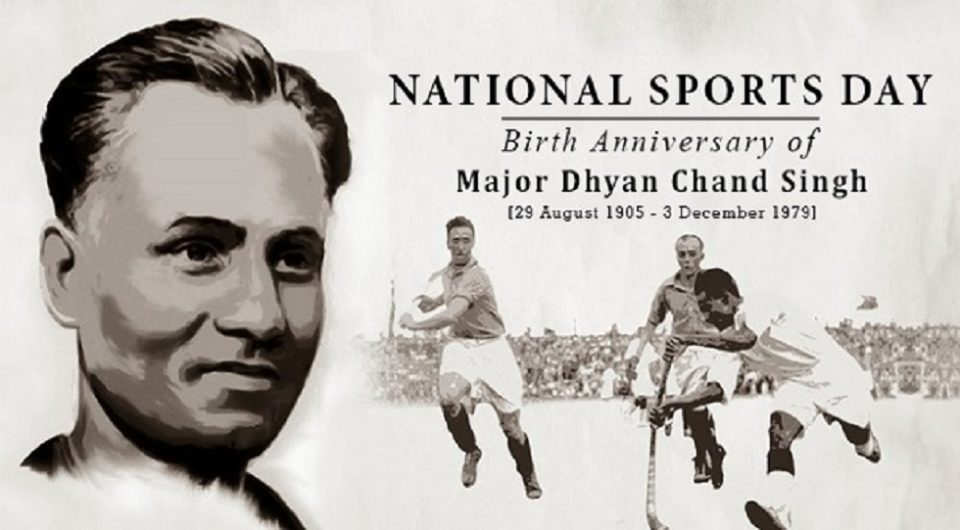 Sports are an integral part of society and its well-being. They are or rather, should be an indispensable part of every citizen’s life. Unfortunately, for many in the country, sports do not go beyond a mere hobby and for certain, not even till there.
For years, the field of sports has struggled to gain recognition and importance as a stream equal to others like engineering and medicine. With more and more players entering the professional arena and also adding to Indian medal tallies at international sporting events, the country is seeing sports progress steadily.
We all are well acquainted with our public holidays, festivals and national holidays. Every Indian can easily list out the important days like Republic Day, Independence Day, Gandhi Jayanti or Christmas. But how many of us are aware that 29th of August is our National Sports Day?
Yes.
Today, India celebrates its Rashtriya Khel Divas or National Sports Day, on the 113th birth anniversary of India’s greatest Hockey players and Padma Bhushan recipient (1956), Major Dhyan Chand.
Born on 29th August 1905 in Allahabad, he followed in his father’s and brother’s footsteps and went on to win three Olympic Gold medals and scored more than 400 goals in his international career. He was known as The Wizard for his superb ball control.
One might assume that such a gifted player might be a child prodigy. But surprisingly, Dhyan Chand claims that he began playing hockey only after he joined the Army at the age of 16. Owing to lack of lights for night play or practice, Dhyan Singh (as was his birth name), waited for the moon to come out and increase visibility on the field. His night practice sessions mostly coincided with the emergence of the moon. Hence, his fellow players gave him the name Chand which in Hindi means Moon.
He gained recognition when he toured to New Zealand with the Army team in 1926 for a tournament in which the Indian team won 18 matches out of 21. He made his first Olympic appearance as part of the Indian Hockey team at the 1928 Amsterdam Summer Olympics where India won a Gold medal. Dhyan Chand was the top scorer of the tournament with a total of 14 goals in 5 matches to his credit. He was called a Magician by the media. He went on to win two more Gold medals for the country at the Olympics in 1928 and 1936 as well.
Dhyan Chand has often played alongside his brother Roop Singh, also a former Hockey player. They both scored goals in the historic final against Germany at the 1936 Olympics in Berlin. Following this great win, it is said that Adolf Hitler offered Dhyan Chand German citizenship as well as a place in the German Army but Dhyan Chand refused both.
There are many such interesting facts as well as legends about the famous Wizard.
Sir Don Bradman, one of the greatest cricket players of all time met Dhyan Chand in Adelaide in 1935 and exclaimed, “You score goals like runs”.
In honour of the sportsman, residents of Vienna have set up a statue of Dhyan Chand with four hands.
In one of Dhyan Chand’s visits to the Netherlands, the authorities broke his hockey stick to check if there was a magnet inside.
He is the only Indian hockey player to have a stamp in his honour.
Once, while playing a game of hockey, Dhyan Chand was not able to score a goal against the opposition team. After being unable to score despite several attempts, he argued with the referee over the measurement of the goal post, and surprisingly, it was found to not be in conformation with the official width of a goal post under international rules.
Every year on 29th August, the President of India gives out the sports awards like the Dronacharya Award, Rajiv Gandhi Khel Ratna Puraskar and the Arjuna Award.
India’s highest award for lifetime achievement in sports is the Dhyan Chand Award presented annually from 2002 to sporting figures who not only contribute through their performance but also contribute to the sport after their retirement.
The 20th National Award 2012, the Gem of India, awarded by the Union Minister of India, was given to Dhyan Chand. The award was received by Dhyan Chand’s son, Ashok Dhyan Chand (a hockey player as well) on behalf of his deceased father.
Dhyan Chand retired from the Army as a Major, in 1956 at the age of 51. He served as the Chief Hockey Coach at the National Institute of Sports, Patiala for a few years.
He has been an inspiration for hockey players as well as other athletes in the country. This Sports Day, let us pledge to honour his contribution to National Sports and to our National Sport by taking an active part in all sporting events of the country, be it as a player or a supporter.