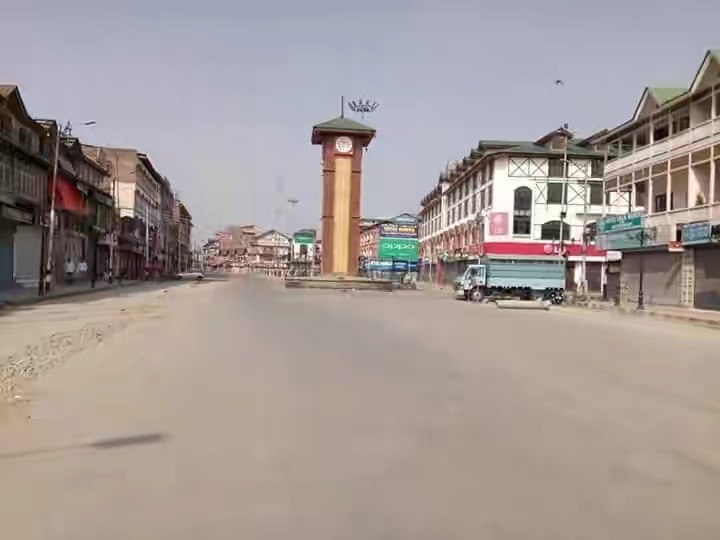 A view of the Commercial Hub Lal Chowk on Sunday

Srinagar, 05 July 2018: Ahead of the strike call given by Joint Resistance Leadership complete shutdown was observed across the Kashmir Valley. All the commercial places, shopping malls were shut today. Public transport was off from the roads, some private vehicles were running on the roads in the valley.


In the picture, members belong to different trade unions of Kashmir valley hold a sit-in protest in front of Ghanta Ghar of Lal Chowk on Sunday
Peaceful protests were held across the valley against the abrogation of Article 35A. The protesters were carrying banners and placards.  The Srinagar city and the sensitive areas were seen the heavy deployment of security forces. Schools colleges and all other educational institutions were closed. Civil society, employees, separatists, trade union traders, lawyers staged protest across the valley.
From the start of the Sunday security forces comprising of CRPF and Jammu and Kashmir police had taken their positions on important routes of the Srinagar city.
Meanwhile, Resistance leaders Yasin Malik, Syed Ali Geelani Hurriyat (G) and Mirwaiz Umer Farooq (M) were placed under house arrest.
All the University Examinations which were scheduled to be held on 6th of July are being postponed.
In view of the strike call, authorities had cancelled the Banihal Baramulla rail service on the 5 and 6th of this month. Amarnath Yatra was temporarily suspended in view of the call.
Peaceful protests were held in almost all parts of the Kashmir valley against the petition.
Chenab valley, Tral, Sopore and all the important towns of valley witness protests against the petition the Article 35A.


A man alone in front of the CRPF vehicle protests against any tinkering of Article 35A in Sopore town of Kashmir valley
In south Kashmir Qazigund town Traders Association Qazigund holds a peaceful protest against the petitions in the Supreme Court challenging the validity of Article 35A. The protest was led by the secretary of the association Muzafar Ahmad Wani.
In a statement, Wani said that the business community would not feel it shy to shed their blood for the protection of special status of the Kashmir people. The protesters supported the call given by JRL yesterday and today. They moved towards the bus stand Qazigund and raised slogans to dismiss the petition against the Article 35A.

A small girl holds a placard behind the barbed wires which reads to save Article 35A
The call has support from all sections of people in Kashmir valley. The normal life in the valley come to standstill due to the strike call was given by JRL against the petition filed  Article 35A on the first day of the two day shut down call.
The hearing of the petition against the Article 35A would start for Afternoon at 2 PM in the Supreme Court today, which gives the permanent status to the people of Kashmir and also bars the non-locals from owing and buying land in the state.
previous post

India & China Seem to be trying hard to patch up their relations over hotline between Armies!