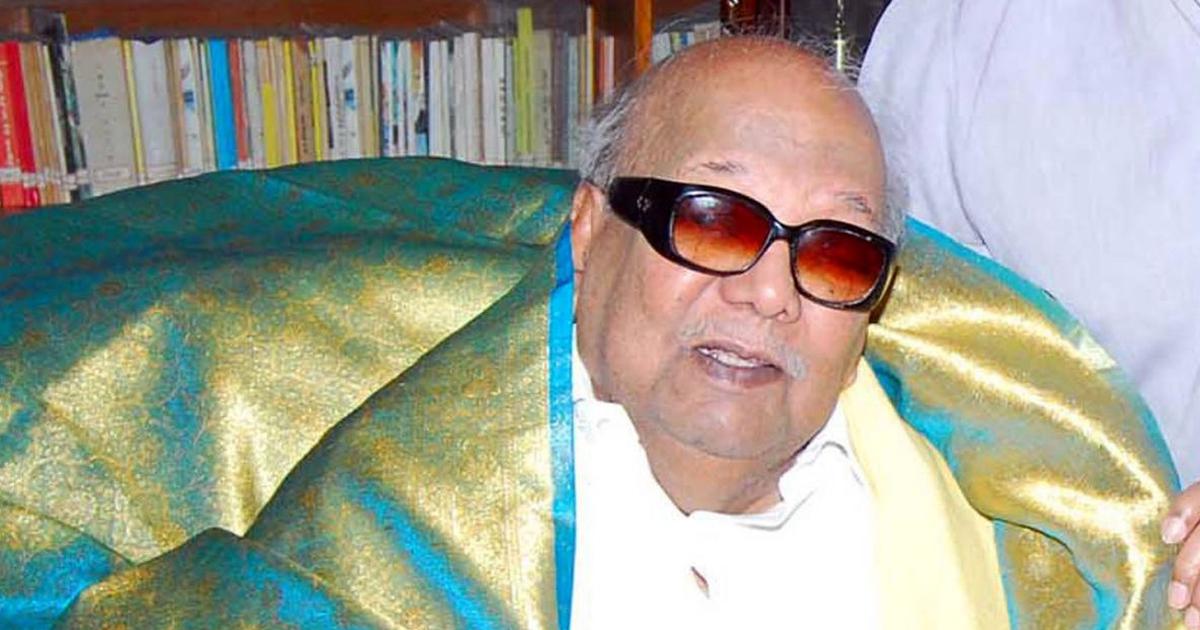 Former Tamil Nadu Chief Minister and DMK patriarch M Karunanidhi  passed away after battling illness at the Kauvery hospital in Chennai on Tuesday at 6:10 pm.
“With deep anguish we announce the demise of our beloved Kalaignar M Karunanidhi on 07.08.2018 at 6.10 pm.  Despite the best possible efforts by our team of doctors and nurses to resuscitate him, he failed to respond,” Executive Director of Kauvery Hospital Dr Aravindan Selvaraj said in a press release.
“We profoundly mourn the loss of one of the tallest leaders of India and we share the grief of family members and fellow Tamilians worldwide,” he further added.
Karunanidhi was shifted to Kauvery hospital on July 28 from his Gopalapuram residence following a dip in his blood pressure and he was under treatment in the Intensive Care Unit ever since.
On Monday evening, his health took a downturn again. In a bulletin, the hospital said maintaining his vital organ functions remains “a challenge” in view of his age-related ailments and the next 24 hours would be crucial.
After his demise Prime Minister Narendra Modi tweeted:

Deeply saddened by the passing away of Kalaignar Karunanidhi. He was one of the senior most leaders of India.

We have lost a deep-rooted mass leader, prolific thinker, accomplished writer and a stalwart whose life was devoted to the welfare of the poor and the marginalised. pic.twitter.com/jOZ3BOIZMj

Kalaignar Karunanidhi stood for regional aspirations as well as national progress. He was steadfastly committed to the welfare of Tamils and ensured that Tamil Nadu’s voice was effectively heard. pic.twitter.com/l7ypa1HJNC

I have had the opportunity of interacting with Karunanidhi Ji on several occasions. His understanding of policy and emphasis on social welfare stood out. Firmly committed to democratic ideals, his strong opposition to the Emergency will always be remembered. pic.twitter.com/cbMiMPRy7l

My thoughts are with the family and the countless supporters of Karunanidhi Ji in this hour of grief. India and particularly Tamil Nadu will miss him immensely. May his soul rest in peace. pic.twitter.com/7ZZQi9VEkm

Karunanidhi’s body will be kept at his Gopalapuram residence till 1 am before taken to Rajaji Hall via the CIT Colony Residence of his daughter Kanimozhi. Prime Minister Narendra Modi, Rahul Gandhi, Mamata Banerjee, K Chandrashekar Rao, Arvind Kejriwal and Pinarayi Vijayan are among the leaders who will pay last respects to the Dravidian stalwart tomorrow.
Meanwhile, a controversy has erupted after the Tamil Nadu government refused the permission Karunanidhi’s family’s request for a burial place near Anna Samadhi where CN Annadurai MGR and Jayalalithaa were buried. Instead, the state government offered 2 acres of lands near Gandhi Mandapam.