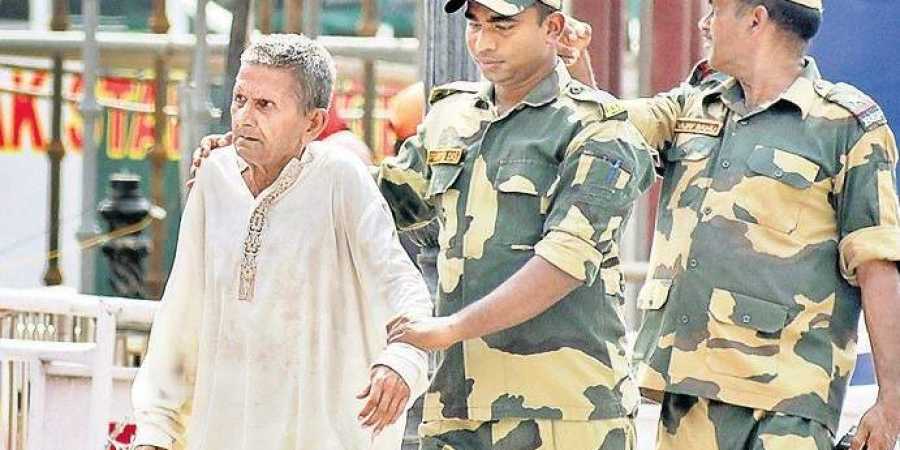 This Hariyali Teej turned out to be the most auspicious festival for Makhani Devi while she watched the news on her mobile phone regarding the release of her husband from Pakistan’s prison. She said, “I kept my hope alive”, and her eyes filled with tears of joy as she sees her husband walking back to India almost after four decades.
“Yes, he is my husband, but he has become very weak and lean”, acclaimed Makhani Devi as she watched her husband, Gajanand Sharma walking through Wagah-Attari border into India in mobile phone.
She worshiped in a temple to thank almighty for the release of her husband and while the reporters interviewed, she was surrounded with neighbors and family members in a narrow lane of Brahmapuri region, who were also very overwhelmed from the news.
Sharma was identified by Makhani Devi as he waked with the help of BSF soldiers. On the first sight she said, “My husband is in a bad state just because of Pakistan and my heart is cursing Pakistan for keeping him away from me and making him so weak. He was in good health before he went missing,” 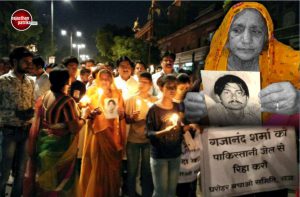 Gajanand is now 68 years old man who went missing in 1982. He was a part of 30 Indian prisoners who got released by Pakistan’s force as a gesture of goodwill on the country’s Independence Day on 14th August.
MP Ramcharan Bohra of Jaipur confirmed his arrival. “I spoke to the authorities who have confirmed that Gajanand has arrived in India. After completing the formalities, he will be reaching Jaipur in a day or two,” as told to PTI by BJP MP.
The MP said that he had sent four men to facilitate the return of Gajanand.
The family came to know about the news this year’s May after Jaipur police received a confirmation of verification about Gajanand’s nationality, who was imprisoned in Lahore’s jail.
However, it has not yet been confirmed about how Gajanand was taken to Pakistan.
Makhani Devi showed utmost eagerness and said she could not wait for the moment his husband would finally arrive home and be in front of her eyes.
She said, “I will definitely ask him how he reached Pakistan and how he spent all these years, but I will not complain. I have had a tough time while he was gone and waited for him all these years. I kept my hope alive,”.
Gajanand’s younger son was also present with his mother and acclaimed that it was like a dream come true for him. Mukesh Sharma, who was only 12 years old when his father went missing said, “I cannot express my feelings in words. This is a dream which turned into reality. We will decorate our house and will organise a feast for our family, relatives and friends to celebrate my father’s arrival after 36 years,”
He also added, “Today is ‘Hariyali Teej‘, a special festival for women, and my mother has got her biggest blessing on this day,”